Opinion has been widely divided about the merits of the modern Bonnie Scrambler. BikerBabe has to make her mind up. She loves it. She loves it not…

When I first saw the Triumph Scrambler in Shirlaws’ showroom in Aberdeen, it was love at first sight. Decked out in Tornado Red and White with lashings of chrome (can you imagine trying to keep it clean though?), even the lights and indicators looked stunning.

The trouble was that when Donald and I stepped outside to exchange keys the illusion faded a little.

He checked the petrol, showed me where reserve was and instructed me in the fine art of starting it up ‘turn the key, pull the choke out and thumb the starter’. A couple of seconds later the 865cc beast was breathing, but you wouldn’t know it to listen to it. Maybe it would sound better when it was warmed up.

Riding off into the busy Aberdeen traffic, the first mental note I made was a positive one; the balance of the machine was superb. The second note was how far away the tarmac seemed as I stopped at the traffic lights. With a seat height of 32.5-inches, it’s only roughly 1.5-inches taller than my MZ, but it felt much wider.

Further down the road I was cursing the heavy clutch and the fact that the mirrors were not securely bolted on. After a quick pit stop at my friend Davies house to tighten them up, I peeled off the dual carriageway and headed for some twisty back roads. 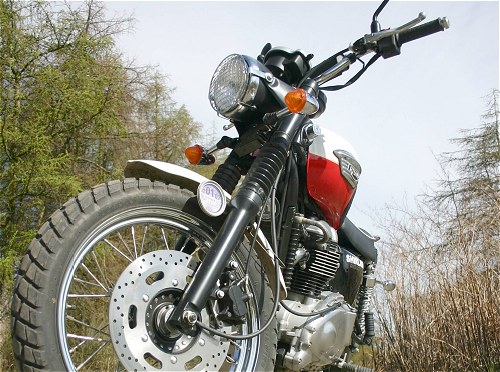 The 320mm front disc doesn’t quite live up to expectations and I can’t believe it’s smaller (or less powerful) than the MZ one. A firm application of both brakes provides adequate stopping power if you apply a little forethought as well, but a bit more bite from the front would be nice. 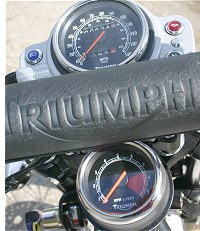 The dashboard, for want of a more technical description, looks quite funky with the speedo and rev counter one above the other, either side of the handlebar brace.

The only minor inconvenience is that the thick foam cover on the brace slightly obscures the rider’s view of their speed, honest Officer. The rest of the layout is minimal, with only four lights to guide you; indicators, oil, neutral and high beam.

The neutral light was quite difficult to see in the bright Scottish sun but it’s not a big problem as the gearbox is very user friendly. 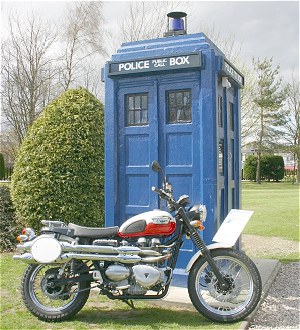 The naked style of the Scrambler means life is breezy at the best of times, but with the recent high winds we’ve had, I found myself hanging on for dear life. That doesn’t bother me though as I much prefer the look of unfaired motorcycles and am prepared to put up with sore shoulders.

Despite these gales and the forecast of rain, I opted to take the Trumpet to the Grampian Classic Club meeting later that night and received some good praise. Most of the dedicated old bike enthusiasts thought it looked the part but sounded a bit suppressed. Gentleman Steve voiced his opinions in no uncertain terms and I’m afraid I cannot repeat them, other than to say the best part of Triumph’s new concept is the tank badge!

On the issue of sound, or rather the lack of it, the faint rumble from those beautiful twin pipes has potential, and rumour has it a little bit of work with a drill would soon free the bikes true spirit. Not that I am condoning that sort of behaviour in any way*.

The wet roads and pitch black night should have conspired to make the journey home a nightmare but to be honest the knobbly Bridgestone Trailwings kept good grip while the headlight was fantastic on both main and dip beam, plus the idiot lights are much clearer at night.

By the time I returned the Trumpet to Shirlaws two days later, I was enjoying the upright riding position that allowed me to peek over garden walls and parked cars, those big wide bars that made for a kind of butch look, and most of all the comfy seat. The good news for Triumph is that it seems to appeal to their target market of youngsters, with a couple of people even saying they’d quite like one.

During my temporary ownership I must have clocked up somewhere in the region of 150 miles, which you might say is nowhere near enough to be able to give an accurate report, but its a lot longer than I usually get to test a bike. It’s also a lot longer than most try-before-you-buy demo rides.

There are a few niggling things that Triumph maybe should have consulted me about first, such as having a fuel gauge or light, although flicking to reserve really isn’t that hard. The wide tank prevents shorties from quite getting tiptoe to terra firma and the leg shields on the exhaust system that are in the wrong place both when standing and sitting. I’m not convinced the side-mounted ignition barrel is a good plan. For starters, I kept forgetting to remove the key, and what happens when it begins to wear?

Weight wise it’s a bit of a beast, clocking in at 32 stone, which makes it a tad hard to wheel around. However, on the move I was more than impressed with the handling, which at normal riding speeds is like any other machine, but where it excels is at low speeds. You can stand on the pegs and gad around off road or even in slow traffic if you need to see further ahead. Fuel consumption worked out at 48mpg which is a bit better than my Skorpion, considering I wasn’t trying to conserve petrol at all, just put the bike through its paces.

I like the idea of looking out of the window and seeing this great big sparkly new bike. I know it wouldn’t stay like that forever with all that chrome, but a girl can dream.

So the big question of any road test is: would I have one?

After ten minutes of riding I had decided the answer was no.

Now I’m thinking if I could wangle some after market silencers which Triumph state ‘do not conform to EPA noise standards’ then that would make a huge difference. Maybe I could put up with the heavy clutch, or perhaps it could be magically transformed.

Ultimately I think the answer is yes, as overall it seems a good package, giving that traditional Triumph ‘cool’ factor without the clichÃ© oil leaks.

A big thanks to Shirlaws in Aberdeen for the loan of the bike, and for having faith that my short legs would somehow grow longer.

*Nor are we! Punching holes in an exhaust pipe might make it sound louder for a while but is unlikely to enhance an otherwise standard bike’s performance…