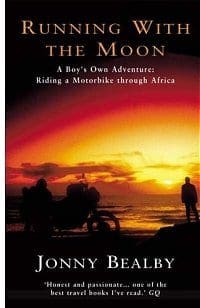 For RealClassic readers who enjoy motorcycle traveller’s tales, Paul Grace recommends this memoir of a remarkable ride through Africa…

At the age of 21, Jonny Bealby had never read a book. Truth to tell, he was rather proud of the fact. ‘ Reading’s boring,’ he confidently told his new girlfriend, Melanie, who seemed to devour books by the dozen.

Life was too full of excitement for Jonny to waste his time on the written word and, being dyslexic (he failed English language O-level five times), he found reading hard work. Nevertheless, a few weeks after his meeting Melanie she gave him a present: Rudyard Kipling’s “The Man Who Would Be King”. And the man who wouldn’t read discovered literature.

These days there are scores of books on the shelves of book stores written around a motorcycle road trip. Many are commercial projects either underwritten by a publisher or television company, others financed or masked under a veil of a charity which I have mixed feelings about. This particular book was written around 15 years ago and stands out as a well written, honest and captivating tale.

‘Running With The Moon’ has been slickly edited considering the author’s self-confessed ability, and has an almost cinematic style. It hits hard from the opening prologue which takes the reader very much by surprise, delivering a stomach punch that sets the scene for the rest of the book and hooks the reader in.

The author, Jonny, sets out on an African road trip along with his pal Neil to try to get over the death of his partner Mel. It all goes horribly wrong at the start and he has to continue the journey on his own, although often riding along with other world travellers in convoy.

The story contains all the elements of any great tale; romance, danger and a rollercoaster of feelings. We are taken on a journey to Cape Town and back through some of the most dangerous parts of the world such as Angola. Like all road trips the story is full of border control yarns and the real world challenges of riding in the third world.

The book continually flips to and fro, from the present time to the past, to include sections of the author’s relationship with his lost wife Mel. Each of these flashback sections tries to add some understanding or context to the author riding his quest. It never comes across as depressing and reveals much of the author’s character. I liked the way the author shows his weaknesses as well as strengths, for instance, crumbling to the drunken lure of an African prostitute.

A new romance with an Arab girl is an ongoing romantic theme to the journey and he arranges to meet her in Egypt on his return journey. Will she be waiting for him?

I think this book would be a far better read to many people than the often mentioned ‘Jupiter’s Travels’ by Ted Simon. It is easier to relate to and has a fuller content.

I can’t see how anyone could write a better motorcycle adventure book to be honest, considering Running With The Moon’s special circumstances and locations. If, like me, you have ridden in the third world you will draw parallels with his journey and will enjoy his sensitive descriptions.

“There had been no twilight that evening – there seldom is in the desert – day and night simply swap places like scene shifts in a play. It was moonless but the scrub and rocks of the desert floor could still be seen, lit up by a million stars. It was as if we were travelling through a huge planetarium, the domed sky, encrusted with tiny diamonds, reaching far away on every side.

“In Europe we tend not to notice the moon and stars and are often in ignorance of their movements; the horizons are frequently obscured and the nights either too cold to observe or too pale to heed, but out here on the equator, where the heat of the day can be fatal, night becomes a time to work and move. The stars and their names are known to most and their patterns give guidance, friends to the traveller since the beginning. The Plough stood ahead with the Southern Cross behind. Away to the west, just above the horizon, Orion lay on his back waiting for time to raise him to his feet. A sudden flash of a shooting star sped across the heavens, dissolving into the streaky blur of the Milky Way, which rested like a cloud directly above us.

“As I looked east my eyes were greeted by lights of a different kind. Tiny orange specks, like fireflies, zipped through the darkness. At first I didn’t realise their significance but as another arc appeared and died I realised that this beautiful display held a sinister sting – tracer bullets.”

Originally a dispatch rider at the time of this adventure, Jonny has gone on to these days run an extreme holiday tour company based in Fulham for the well-heeled eco tourist. If you can get hold of the hardback version of the book it would be a better read, as the font size of the paperback copy is rather small for classic eyes. It should be available at your local library. The paperback however fits easily in your panniers when you are riding your own far-flung adventure.

Running With The Moon, by Jonny Bealby