The rumours are confirmed: there’s a new Enfield importer. However, the previous incumbent hasn’t quite left the building…

It’s been over six weeks since Watsonian Squire announced they were relinquishing the UK franchise for Royal Enfield motorcycles. Within days of that announcement, rumours were rumbling about identity of the new distributor, but MotoGB Group has only just been confirmed as the new UK importer this week.

Watsonian took on the role of official importer for the Indian-built traditional-style singles in 1999, and over time worked with the factory to develop new models, a five-speed gearbox and the lean-burn unit-construction engine, as well as improving the overall quality of the machines and their components. Watsonian created a range of ten or more different UK market-only editions like the Trials, Woodsman and Clubman models which found favour with the British buyers (and were responsible for occasional mis-steps like the Fury, which wasn’t so well regarded). At the peak of the market before the credit crunch, more UK motorcyclists bought new Royal Enfields than bought new Moto Guzzis.

However, UK sales are small beer compared to Enfield’s home market in India. Since 2010 the Chennai factory has doubled annual production to 100,000, which means that they’ve overtaken the likes of Triumph (around 50,000 bikes built per year) and are catching BMW (120,000). No doubt Enfield’s parent company, Eicher Motors Ltd, wanted to see UK sales reaching four figures – but in the past year Enfield dealers have reported slow sales along with most other retailers of new motorcycles. Several of the UK-only Enfield models were delisted at the end of 2012.

Meanwhile, Watsonian Squire’s core business of building sidecars and luggage trailers has been performing rather more strongly, with full order books in early 2013. Watsonian’s management took the decision to step back from their official involvement with Royal Enfield – saying initially this was so they could concentrate on the sidecar business. By the end of March 2013, however, the company had rebranded itself as the Watsonian Motorcycle and Sidecar Co and announced its intention to keep one foot firmly planted in the Enfield market.

‘With years of experience and a quarter of a million pounds worth of parts and accessories in our facility, we will continue to supply spares to owners of post-1999 Bullets throughout the UK,’ said the Watsonian announcement. ‘We have also expanded and modernised our showrooms, from which we will sell new and used Royal Enfields, factory-built specials, new and used sidecar outfits and motorcycle luggage trailers.’

There is already a well-established independent Enfield specialist in the UK – Hitchcocks’ Motorcycles. Allan Hitchcock confirmed to us that while everyone else was playing musical chairs, Hitchcocks would go on developing their massive range of spares for all Royal Enfields, those built in Redditch as well as India, from 1940 through to the present range. Importers come and go, but Hitchcocks have carried on – they’ve already outlasted Evesham Motorcycles, Bavanar and now Watsonian…

It’ll be interesting to see exactly what MotoGB can bring to this party – the market for a classically-styled, air-cooled 500cc single isn’t exactly enormous, and there is a school of thought which suggests that it’s pretty much reached saturation.

Steve Oliver, General Manager of MotoGB, is upbeat: ‘This is a real coup for us as Royal Enfield is the epitome of British motorcycling both past and present. These machines hark back to a golden era of motorcycling but today’s Royal Enfield range is also thoroughly modern and reliable. These beautiful bikes are not just for the older motorcycling generation, keen to recall the days of their youth, but a Royal Enfield is also a classically-styled machine which is perfect for riders of any age to enjoy, whether they commute daily on two wheels or simply enjoy a ride at the weekend.’ 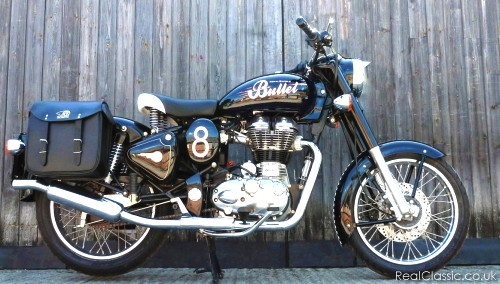 Pricing may also be an issue. MotoGB have considerable experience with high-end marques like MV Agusta and Benelli, as well as the more down to earth SYM and Keeway brands. It’ll be interesting to see if they can develop a new market for the Royal Enfield bikes in the UK – bikes which, at the end of 2012, were listed at prices between £4000 and £6000. With several key competitor models strategically priced at under £7000 (including entry-level Harley Sportsters, BMW 650 singles, Triumph Bonnevilles, Ducati Monsters and Kawasaki’s W800), Royal Enfield dealers were finding it difficult to convince customers to part with their cash for a 27bhp pushrod single.

MotoGB are now liaising with the existing Enfield dealer network, and say they are looking to appoint ‘pro-active’ new dealers in future. The information on the MotoGB website currently redirects visitors to the Indian homepage. As soon as we have firm information about which models will be officially imported for the UK market, we’ll let you know…