‘Look at that A7.’ A nice man had collared me at a show. It appears to be an occupational hazard. Time was, the occupational hazard was more like getting collared by a handsome lady and dragged into a secluded corner for some spirited debate. Times change. Or maybe my mind changes history? Who knows?

I gazed limply at him. I’d been working on the magazine’s impressive stand all day and hadn’t actually seen any bikes apart from distantly, through a haze. ‘Which A7?’ He stared at me sternly. ‘The one over there, the one on the stall…’. There were hundreds of stalls. It is difficult to appear anything other than profoundly dim at times like this. Maybe he’d take pity on me.

‘Which stall?’ I understood with the rapidity of an H2 Kawasaki breathing nitrous that if he replied ‘The stall with the A7 on it’ then I would in fact murder him. He didn’t, instead he walked me slowly (I had been standing for hours and the feet were sharing the industrial unrest of the endless Greek strikers) a couple of hundred yards to show the bike to me. Nice man. Friendly man.

This is not the BSA A7 you are looking for.

The A7 was OK. I’m sure it ran well, as the vendor’s sign assured us, and that it would be a groovy ride for someone. I read the rest of the description on the for sale sign. Had I been more alert my eyes would have exploded from their sockets when I read the price. As it was they simply watered. The nice man plainly thought I had burst into tears, was weeping. He manfully plied me with a cup of coffee once we’d returned from the sight of the A7. Did I, he wondered, think the price was too high? I nodded, still speechless.

We then shared his monologue about the ancient Beezer’s claimed originality, its provenance, its astounding rarity caused by that originality. These simple things apparently pushed the pleasant but unstunning 500 twin into price territory usually reserved for the cheaper camshaft Nortons, minor Vincents, that sort of thing. Once I had recovered a little, I suggested that I knew of a couple of other A7s for sale, in similar conditions, good runners, and available for about a third the price. A much better idea, I suggested, delicately, in case he had in fact already bought the thing and was seeking confirmation that he’d bought a great Beezer bargain. Luckily, he hadn’t, but he still thought the price was OK.

Dangerous territory, this. Also a minefield littered with poison chalices. Because I know the guy selling the stellar Beezer quite well, and wouldn’t want to talk it down at all. It’s not easy to offer sensible suggestions. But I tried. Take the word ‘original’. What does it mean? There are many interpretations, but in my weary world it means that the bike is as it was built, using the parts it was built with excluding consumables like tyres, cables, brake linings, chains and the like. And originality is not a definitive expression; there are as many grades of originality as there are motorcycles, I’d guess.

The bike in question did not display its original paint. BSA never painted a bike in that colour. They also never fitted such ill-fitting and poorly chromed wheel rims. Or exhausts. The seat was a replica seat of dubious parentage, and the ‘Lycette’ badge on the back could only have been fitted by a man in the Lycette works if they had invented time travel in the 1950s. Which is possible, if improbable.

I explained all this, slowly and carefully, while drinking the second cup of coffee so kindly provided by the nice man. 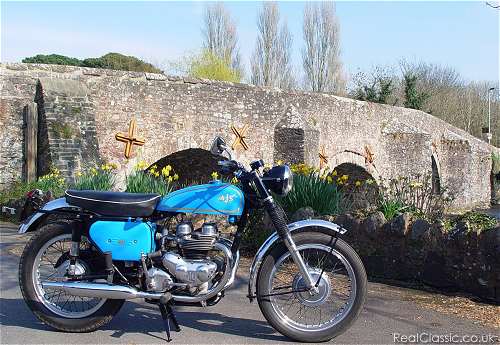 This is not the AJS you are looking for.

‘What about the AJS?’ he asked. It was for sale on a stall nearer to our own. I had in fact seen the AJS before, and suggested gently (for he may have owned it; I’d not met that lucky fellow) that the forks were later than claimed, the exhausts were new, the mudguards were nothing like (although they were a fine shade of black powder coat), the transfers were decals, the seat new and… it would be a great bike to own and to ride, which is, I suggested all that matters.

He disagreed. He felt that bikes like the AJS were indeed great riders, but bikes like the BSA – really original bikes – should never be restored. They should instead be preserved for posterity, so that future generations could see them in all their unrestored glory and marvel at the wisdom of the ancients, so forth. That’s fine. I’m not a fan of museums, not really, but if a bike is really unusual, for whatever reason, then a museum could be a great place to share it with others.

He was horrified. ‘A museum! I hate museums!’ I nodded sagely, attempting to appear intelligent. ‘It should be ridden!’ I agreed. It should. But if it was ridden it would wear out, and the originality he so valued (and why not?) would wear away, patina would be replaced by rust and parts which are no longer available as NOS would be replaced by repro parts of the wrong sort – if not parts made from the wrong materials – I am not alone in replacing lots of originally chrome-plated parts with stainless steel items.

Then where is the highly prized – and indeed highly priced – originality? The bike would devalue like a new one fresh from the showroom.

We ambled genially around the subject for a little while, and we drifted to the ‘What would you do if it was yours?’ thing, which is always fun. How can a chap answer that? The truth is that I would replace it with a model more to my own odd tastes, although BSA’s A7 is in many ways a great bike. If I had one it would need to be a rigid or a plunger. But if I had to keep the bike, for some theoretical reason which I can’t understand, what would I do then?

Do you know; I have absolutely no idea. I do have an almost completely original Norton Big 4, bought from a friend last year. I don’t ride it. I don’t ride it because I cannot start it reliably, being a weak and feeble fellow. So it sits in The Shed, oozing gently. My friend at the show would deride me for keeping it selfishly hidden from the admiring gaze of others, but there are lots of other Big 4s for them to admire.

Originality? What would you do with it? You, yourself? Ride it? Restore it? Hide it away? Let me know, I’m curious…