What exactly is a DVR, and why do classic bikes need them? Mike Hutchings explains why he developed a new voltage regulator to suit his BSA A10…

‘A couple of years back I converted to a 12-Volt electrical system on my 1960 BSA A10, employing a commonly available electronic regulator’ says Mike Hutchings. He’s currently Secretary of the Hampshire branch of the BSA Owners’ Club but is also a director of electronics firm Manor Technology Monitoring Limited.

‘My specialisation has primarily involved developing electronic sensor and monitoring solutions, frequently for use in very harsh environments. I recall experimenting with electronic regulator designs some 25 years ago. Then a chance conversation with Sean Hawker led me to develop the current DVR product line…’ when things with Mike’s A10 conversion didn’t go exactly as planned.

Enter the MTML solid-state dynamo voltage regulators which work as a replacement for the original electromechanical CVC regulator units on dynamo-fitted classic motorcycles. The DVR2 promotes better lights and properly charged batteries and is 6- or 12-Volt selectable so you change voltage at any time, and comes in positive and negative earth versions. It’s compact enough to fit in Lucas or Miller case and it doesn’t run hot so it can be fitted as a stand-alone unit in a toolbox or bolted to the rear mudguard or such. 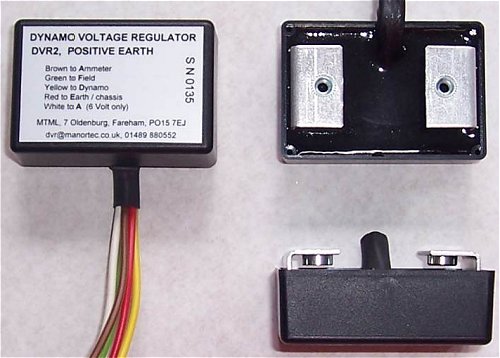 MTML provide an information sheet so the home mechanic can fit the DVR2 and understand what’s going on. And although Mike developed the unit to work on his BSA, it suits other classic motorcycles down to the ground too.

James Legg fitted one to his 6-Volt 1949 Matchless G80. ‘I am very pleased with the operation of the regulator’ he says. ‘It seems to perform very well, giving a charge at 7-Volts and with the headlamp on it balances the discharge at just over 30mph in top gear. I had previously bought a replacement relay regulator but it was very poorly made and not set up correctly. Despite spending lots of time trying to get it right it has been most unreliable.

‘Hopefully I can now forget all about it and the Prince of Darkness has gone away for good!’

If you’d like to know more about dynamo voltage regulators then contact Mike Hutchings at MTML via www.manortec.co.uk/dvr_order.htm