Some time ago, we mentioned Quasar machines and managed to spell the name wrong. Here’s more on the subkject (spelling not necessarily correct)…

The feet-forward Quasar two-wheeler was designed during the 1970s by Ken Leaman and Malcolm Newell. Several were produced from 1976 onwards – there may be 20 in total in existence – and each took about a month to build. The result was a bike which would do 110mph but, more importantly, could sustain 100mph indefinitely at comfortable revs OR could give 90mpg at a steady 50mph. With its four-gallon fuel tank, this gave the Quasar a range of over 350 miles between petrol stops.

The performance came from a water-cooled, ohv, 850cc inline four, running 9:1 compression to produce 41bhp at 5500rpm. The shaft drive used two UJs to transmit the power to the rear wheel, while the rider selected one of four gears using a foot-operated gearchange. The motor was housed in a frame made of Reynolds 531 tubing, with pivoted fork suspension at both ends using air shocks. The alloy wheels were 18-inchers, fitted with twin disc brakes at the front and a singe disc at the rear – operated by hand and foot levers as on a standard motorcycle of the time. The throttle and clutch were similarly conventional, although the cockpit was a little more complicated than on the average 1970’s motorcycle – it even had a facility to blow hot air at the rider’s hands! 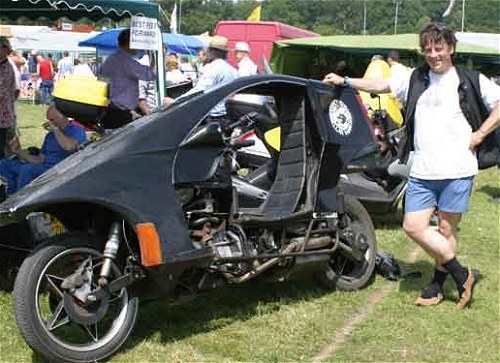 The Quasar was designed so that routine maintenance could be done with the engine in the frame. Unusually, it had two sidestands – one on each side. The external panelling was intended to be sleek and easy to clean, without any cracks or ridges to accumulate dirt. A huge (66-litre) luggage compartment was incorporated into the tail unit.

Oh, and Blez thinks they’re pretty brilliant. If you want to know more, he recommends:

Comment: Back in ’78, Martin Gelder thought the Quasar was the shape of the future. Sadly, he was wrong…

The Quasar was one of those Great British Ideas that we seem to do so well. As an engineering apprentice at the time of the Quasar’s launch I was fascinated by the concept; here was something totally new, completely revolutionary and destined to shape the future of motorcycling. The first time I saw one in the flesh was on the Isle of Man in 1978, and I ran about half a mile to catch and quiz the owner, and to get a closer look at his amazing machine.

With hindsight, the rider’s comments were surprisingly reserved, tempered with a lot of “yes, but” and sprinkled with a fair amount of damning with faint praise. The machine itself was somewhat less than the technological marvel we expected. Ill fitting fibreglass panels, sidestands operated by what looked like a pair of bent coathangers, a windscreen wiper filling most of the forward view and a wheezy Reliant Robin engine; It was the seventies, I suppose, but… 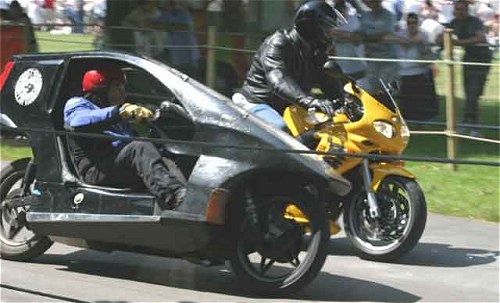 I suppose that just getting the thing made and producing something that worked as well as it did in the process was a minor miracle. But a 110mph top speed and 90mpg at 50mph weren’t impressive figures in the late 1970s. There were many much faster bikes, many with better handling and several with a similar level of long-distance sophistication. There weren’t many that were anywhere near as expensive, however; well over £3,000 for the Quasar at a time when a state of the art GS750 cost £1,300. 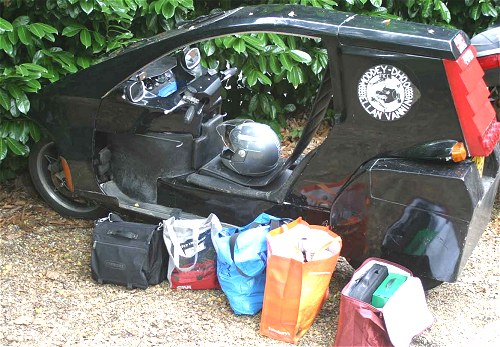 Perhaps the Quasar was just too far ahead of it’s time. Twenty five years on BMW’s C1 had the accident protection and crashability, Honda’s Silverwing scooter (or Suzuki’s Bergman, Yamaha’s T-Max, etc.) had the riding position, comfort, weather protection and performance. And yet we’re still buying motorcycles that are basically unchanged since the 1930s.

A hub-centre-steered, feet-forward, high performance sports motorcycle would almost certainly be the answer. Unfortunately, no one’s sure about the question… 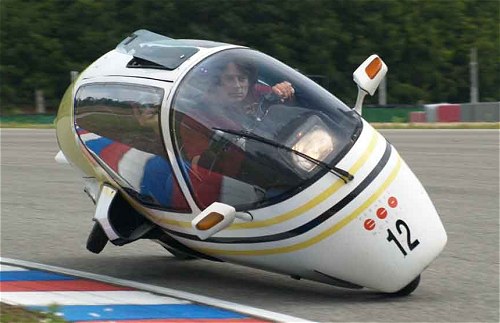