Motorcycles have been used, in many different forms, for some 92 years in the UK’s mail and communications industry. Paul Wood explains how motorcycles have worked in the Post Office…

Motorcycles and sidecar combinations were among the first vehicles owned by the UK’s GPO. They were used both for carriage of mail and the maintenance of the telephone system, which was in its infancy when the bikes arrived. 20 motorcycle combinations, each with a sidecar of 18 cubic feet capacity, were placed in service in 1914 to replace postmen on horseback. The fleet comprised four Rovers, ten New Hudsons, and six Douglas machines. All were single cylinder machines of 3½ hp with wicker or metal sidecars.

In the following year, 1915, a further Rover combination with a 14 cubic feet capacity sidecar joined the fleet as a reserve, along with four tricars of 6hp, two of each powered by Autocarrier and Warwick. These were found to be underpowered and had a short life.

1915 also saw the first motorcycle purchased by the engineering fleet of the GPO when five Rudge Whitworth motorcycles were bought and went into service at Otterburn, Stroud, Boroughbridge, Peterhead and Castle Douglas. A further motorcycle, a Rudge multi at Hythe, followed in 1916. The first BSAs joined the GPO fleet in 1917/18 when three were purchased for Jedburgh, Chatham and Brentwood, together with a further Rudge Whitworth for use at Maldon. Then followed six Triumphs in 1918 plus two more secondhand from the Army, with another Triumph in 1919, which entered service at Castle Eden. 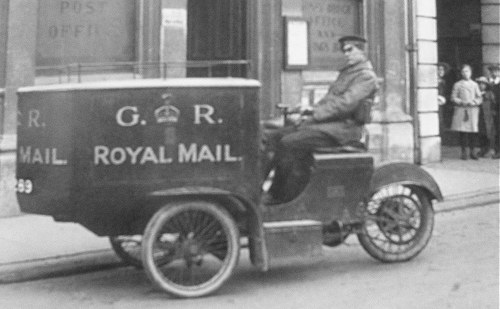 The limited experience of motorcycles and motor vehicles in general led the GPO to set up a motor transport section in 1919 using surplus vehicles from the disposal board of the War Department. Motorcycle combinations were prominent in these early purchases, with 239 Douglas and 2632 Triumphs purchased, as well as 167 vans and lorries. Meanwhile, the postal service purchased more postal combinations in 1920, this time larger two-cylinder machines with postal carriers of 24/32 cubic feet capacity. Records are very sketchy for this period but it is thought that these machines included Royal Ruby 6hp and Clyno 6hp motorcycles.

The machines purchased from the disposal board soon needed replacement as they had been well used by the armed services. The first batch were replaced in 1921/22 when a Triumph and Enfield were purchased, followed in 1922/23 by a further 17 Triumphs. In the meantime BSAs were soon tried by the engineering fleet with 66 BSA 4¼ combinations in 1923/24, together with 74 Triumph 4¼ hp machines.

In the following year BSA machines had become the main choice with 190 machines of both 4¼ and 3½hp, whilst only 16 Triumphs were purchased. The motorcycle combinations used by telephone linesmen were much lighter than those used by the postal equivalents, the Matchless and Triumph 8hp being purchased in 1922/24. Among the 1924/25 purchasers of 63 of these motorcycle combinations, known by the GPO as heavyweights, were some BSA 6hp machines. Two experimental combinations were also purchased at this time — a BSA 8hp registered XK4128, and a BSA 2¾hp combination XR1663. 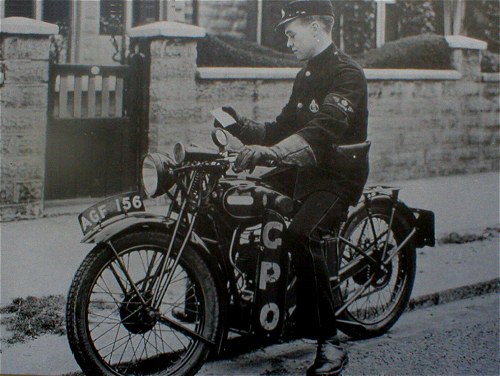 Reappraisal of motorcycle purchases by the GPO vehicle fleet in 1925/26 led to the purchase of 11 solo motorcycles, the first solos for the postal fleet. All were probably BSA 2¾hp machines, whilst the telephone department continued with a further 269 combinations purchased, described as 4¾hp or figures 557cc. The following year, the postal fleet experimented with 10 lightweight combinations, six Fore carriers (successors of the early Tricar) and 64 solo motorcycles, all BSA 2¾hp machines.

This period was the heyday of the use of motorcycles with the telephone department’s fleet that purchased 2417 combinations between 1926 and April 1933. The majority of these purchases were BSAs of 4¼ hp or 6hp but small numbers of Triumph 4hp or 5½hp machines also joined the telephone fleet. The six postal BSA Fore carriers were soon converted to combinations, but the postal fleet persevered with solo motorcycles for mail delivery, with a further 194 BSA 2¾hp machines purchased between 1927 and 1930, at the same time purchasing another 439 BSA 2¾hp combinations. 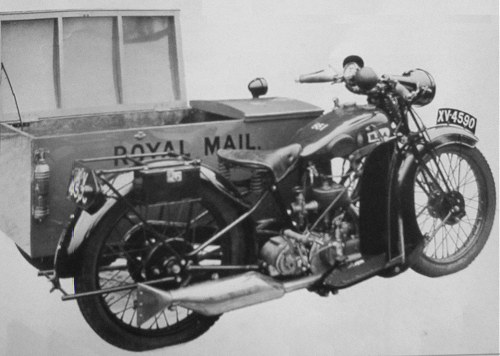 By 1930, it was clear that solo motorcycles were unsuitable for the ever increasing amount of mail delivery work in rural areas so purchases in 1930 consisted of 256 combinations and only four solos. At the same time a programme to convert earlier solos gained momentum with 64 being converted. 1931/32 orders were 36 solos, 269, 349cc combinations and 20 of the heavier 559cc combinations, all of which were of BSA manufacture.

Next time: the telegram takes off, and what happened during the war…