Always on the lookout for quick and cost-effective remedies, Derek Pickard details a smart way to rid a petrol tank of filter-clogging rust…

One thing which is really hard to fix in old bikes is rust in the petrol tank. No cleaning chemicals can do the job and we’re now learning how some of the expensive tank coating treatments are being adversely effected by the ethanol in our fuels. But there’s a smart alternative and this one is quick and very cheap. The objective is to use reverse electrolysis to take the rust off the metal so it falls away, no fuss.

The plot is simple, we arrange for the tank to be filled with a user-friendly chemical and charge it with a safe electrical current from an easy source. In less than a day, this arrangement can remove most of the rust from rusty petrol tanks to leave relatively clean metal. All done with no doubtful chemical lining the tank’s inside and no future worries about what can happen when future fuels turn a coating into a carb-clogging gloop.

The chemical to use is a mixture of water and sodium carbonate. This latter material can be known as washing soda, soda ash or Lectric Soda Crystals from a supermarket which cost me around Aus $3. I diluted 1.5kgs of crystals in with 15 litres of water and poured it into the tank. (That means 1kg for 10 litres or 2 for 20.)

A metal ‘sacrificial anode’ has to be made which is supported in the tank neck without touching the tank body. I used a vented plastic cap from an old oil bottle with a bolt through the middle that supported an eight-inch by one-inch plate of shiny thin steel that would hang down inside the middle of the tank without ‘shorting’.

The electrical power can come from an ordinary 12 Volt battery charger and the older type with an amp meter is better than a modern cheap and simple one because the meter is a quick way of reading what actual current is being used. The negative from the charger is connected to a cleaned part of the metal tank and the positive lead to the bolt holding the anode. To prevent any electrical current overload, it is a good idea to include a normal 12 Volt headlight globe in series between the charger and the tank connection on the negative wire. 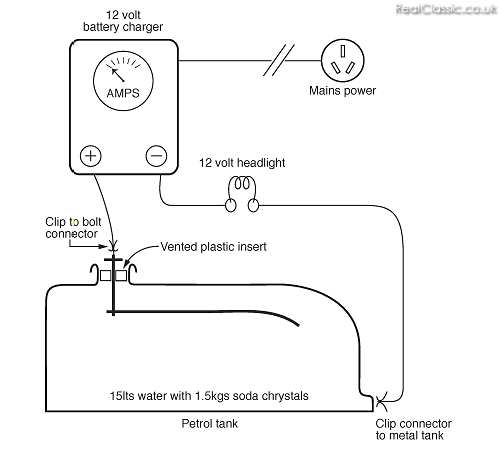 Using reverse electrolysis to take the rust off the metal. Simple…

This whole contraption is then plugged into mains power. Initially the charger’s ammeter might show a few amps but this will reduce with the hours. When the current display drops to one or less amps, remove the anode and clean off the rusty grunge before returning it to work.

Be warned: the chemical will effervesce and can froth, so a vented plastic cap insert is vital. I drilled a couple of small holes either side of the central bolt from which discoloured water bubbled over and ran down my drive.

This method obviously can’t rescue really bad rust which has gone through the metal to cause leaks, but it is effective with removing most surface rust. Well, it worked for me. And next time you see me riding my recently restored Honda CB77, you’re welcome to remove the tank cap and see for yourself.

*but not inside an oven, or anything daft like that

It should go without saying, but we’re going to say it anyway. You muck around with liquids, electricity and conducting metals at your own risk. Don’t come blubbing to us if you fry something delicate…