Old bike shows are strange events, not least when viewed from the inside out. Frank Westworth spends too much time standing on stands…

‘I don’t read your magazine.’ A man stands before the RealClassic stand, staring earnestly at me. I resist the temptation to look behind, in case he is really staring at someone else.

‘Why are you telling me this?’ I ask, faking a friendly smile.

‘You wrote a story about my mate’s bike and it was rubbish.’ The bike or my story? I wonder. Life can be tough. ‘It was my mate’s CB200. You said it was crap.’ Bafflement. I have never written a story about a CB200. I would have remembered it.

‘I have never written a story about a CB200.’ Honestly is occasionally the best policy.

‘Yes you did. It was in Classic Bike.’

‘That can’t have been me. I don’t write for that magazine.’ He won’t know that I once did, but under a pseudonym to save their editor’s blushes and to hide from my mistakes. But I never did write about a CB200. I beam in a doomed attempt at charm; ‘This is not Classic Bike. This is another, infinitely superior-in-every-way magazine.’ He stares at me as though I am a complete idiot. He may well not be incorrect of course. And grunts. A worrying number of men grunt. Why?

‘Just thought I’d tell you.’ And off he walks. I hope he feels better soon.

‘Hello Frank!’ A complete stranger has materialised before me. ‘I used to read your magazine but stopped when you started filling it with Japanese bikes.’ He is beaming at me.

‘It’s not filled with Japanese bikes.’ Am I starting to squeak? ‘Look,’ I say, brandishing a copy; ‘Not one last month. Not a single one.’ His beam is intense, more Cibie than 6Volt Lucas.

‘Oh. Yeah, well. I can’t afford to buy them all.’ I wonder why he is telling me this? Should I make a small donation? An act of charity? ‘I don’t read them so there’s no point.’ I can most certainly not argue with that.

‘Anyway. Can’t stand around. I’m off to buy a new Mercedes!’ His eyes light up. As I’m sure would mine were I buying a new Mercedes. 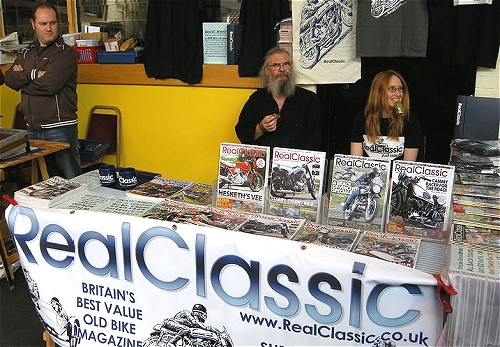 An older gentleman strolls over. He looks worryingly sensible. Maybe he has a hidden Kalashnikov? He reached into his pocket and produces a photograph, which he uncrumples and spreads before me.

‘That’s my bike,’ he explains. I smile. The bike is familiar. I once owned it. ‘It’s a great bike. I really like it.’ I draw a sigh of relief. ‘Why did you sell it?’ I decide to be honest.

‘I sold it because I could not get on with the handling at all. It was uncomfortable and hard for me to start. But if you’re happy with the riding position and can make it steer, then great!’ I radiate enthusiasm and good cheer. A happy chap. Hurrah, so forth.

‘Oh. I’ve never ridden it. I take it to shows and I tell everyone it’s your old bike. It won an award at Stafford last year…’ He departs, pleased somehow.

A friend appears and waves. ‘Coffee?’ I wave back in delighted confirmation. He does not return.

‘My MP wrote back to me about the ethanol in petrol business. You should read that stuff and put it in the magazine.’ And with that he walks briskly away. I stare at the paper. It would take a whole day to read it. All the info about fuel ethanol is freely available from many sources.

A handsome lady leans scarily over the precarious RC trestle table. I fear becoming unbalanced and imminent collapse. ‘How’s the cat?’ she asks. ‘How is Agent Orange?’ I am beginning to feel faint.

‘He died a while ago. Maybe a year. Maybe two.’ She looks disappointed. I wish I had a bunch of flowers to console her. 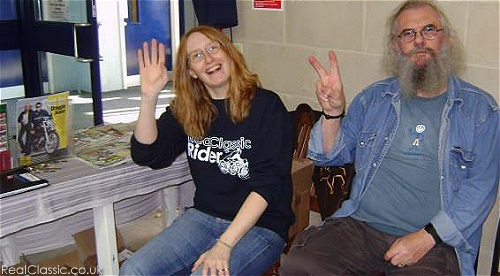 A Scottish man approaches, grin set at full strength. I know he is Scottish because everyone calls him Jock. He says nothing, hands over a bag filled with chocolate bars. And leaves.

Have you ever wondered why the folk working on a motorcycle magazine stand rarely make sense?