Old bikes never do quite what you expect them to. Steve Allcott was reunited with his dad’s Ceefer and ploughed a field with a Panther. Just don’t comment on his Thunderbolt!

It’s a funny old world that we classic bike enthusiasts live in. Perhaps part of the enjoyment is never quite knowing what lies around the corner. From a personal perspective I have come across most of my classic stable quite by chance, yet when I purposely look for a make or model, one never seems to materialise.

When I was a mere youth, my father owned a nice BSA C12 (what! who said grey porridge?). Fast forward some 20 years. I found myself delivering my old CX500 to its new owner (he had not yet passed his test). Whilst I was waiting for him to come back into the garage with my cash, I noticed a number plate that I recognised – yes, you have guessed, it was my dad’s old Ceefer sitting in the gloom. A hastily rearranged part exchange later and I found myself the owner of a fine, if rather slow, BSA.

I have since covered over 20,000 miles on the old chugger.

A number of years later, there was an exhibition down in darkest Brum (Birmingham to those south of Bristol or north of Manchester) of motorcycle art – a posh way of saying custom bikes. At the time I was not into custom bikes (other than ones I had wrapped around a lamp post). However, I found myself at a loose end mid-week as I had completed the days toil a little early, and quite by chance I was working next door to a railway station just outside Birmingham. As I emerged from the gloom, a train drew into view and the stationmaster announced that it was going to the same place as said exhibition.

About 10 minutes later I found myself in this odd hall (a gas works hall – I think) surrounded by some of the strangest bikes that I had ever seen. There in the middle was a bright yellow chopper with an engine that looked like it had been liberated from a barge (well I don’t know what a barge engine looks like, do I?). The sign on the bike said Panther and issued a challenge regarding what the little lever was for on the timing chest.

Later still, I found myself back on the train reading the local paper (this in itself is a minor miracle), and smack in the middle of the ‘bikes for sale’ section was a Panther Model 100. I just had to take the family and have a look. The bike turned out to be very pretty and was attached to a sidecar that was big enough to solve the refugee crisis (I had to stand on the footrests to see over the sidecar when turning at junctions). The vendor insisted that I take the bike for a run and I readily agreed, bundling my son into the sidecar whilst he proclaimed, ‘I am your son — not ballast’, and we were away.

The bike seemed to be quite good and on occasion we even got the revs up to three figures (100rpm — gosh). Previously protesting son was enjoying the experience (well he was quiet anyway), and I was picturing myself going to events with a tent and cases of beer in the sidecar.

Now I know it sounds silly now, but… this was the first time that I had ever piloted a crab (sorry – sidecar). I was approaching a long left hand bend at some speed. At this time about four brain cells finally kicked into realisation — too late! We left the road, disappeared through a hedge (leaving a very nice Panther impression), ploughed half of a field and finally came to rest stuck in a bramble bush. Ballast — sorry, son — was not impressed when I did my 007 impression, saying; ‘shaken not stirred’ in a Scottish accent tainted with Brummie.

After a short, slow ride back to the owner’s house there began a little debate about the price. I just had to buy it as there was at least £400 worth of damage – are wheels supposed to be square? So I found myself the owner of a smart, but slightly damaged, Panther. 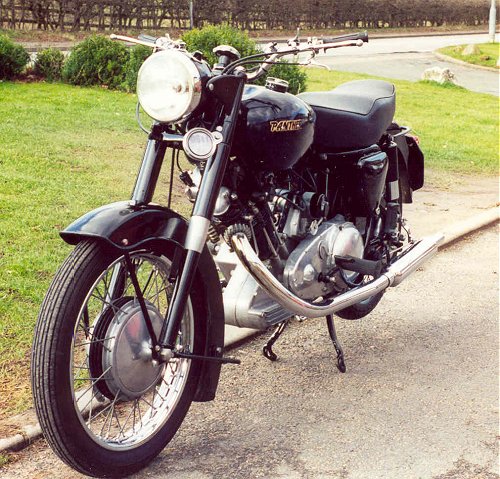 When I took the sidecar off the bike a week later, I discovered that Mr Whitworth (of thread fame) had got it all wrong. Fasteners were definitely not what was required – this bike had very little evidence of such devices. Instead it had ‘——— weld’. Have you ever seen a ring of weld placed around the end of a clutch basket to stop the plates from coming off?

In addition it also had a tendency to turn left into pub car parks whenever the front brake was applied – turned out to be a missing spring in the front left fork leg. Have you ever wondered about the mental state of some people who mess about with old bike mechanics?

Anyway, as I suggested at the beginning, the old bike world is full of surprises. For instance, when you have painstakingly customised an old BSA Thunderbolt into a cafÃ© racer with just a nod at the Spitfire MKII (care of a Burton Bike Bits fibreglass petrol tank), it’s a surprise when some goon in a field tells you that BSA only made a few of that model, but that I had made a few mistakes, and this, that and the other were not quite right. Laugh? I nearly bought a round! 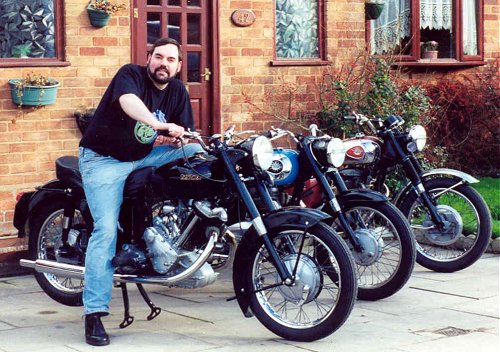