If at first you don’t succeed (and indeed your Bantam conks out before it even leaves Europe), try, try, try again. And then write a book about the experience…

When it comes to adventuring – and I don’t just mean motorcycle adventuring – there is an unspoken compact between the few-who-do, and the many. The many, typically, don’t. Don’t go adventuring. Or at least not to the extremes of the Amazon jungle by bicycle, the South Pole man-hauling a sledge, or the pyramids by BSA Bantam. The many tend to bankroll the exploits of the few, perhaps in the form of pre-expedition sponsorship and assistance, or by providing help along the way, or by purchasing the subsequent book, watching the film of the adventure, or attending a talk given by the returning hero.

It’s an arrangement: a deal. The mad / bad / dangerous to know get to risk life, limb and any chance of domestic bliss while the rest of us snuggle up on the sofa and go for a nice ride on Sunday. (So long as it’s not raining, you understand.)

Gordon May’s trip to Egypt is absolutely full of heart. How could it not be? He was on a shoe-string budget. He’s a self-declared mechanical numpty. He chose to go on an unfamiliar and untested 60 year old Bantam – a Bantam! for goodness sake – even if he did opt to fit his D1 with a bigger 175cc engine (which might have been a mistake, in fact. Finding suitable petrol for the ‘high performance’ little stroker in North Africa proved to be nearly impossible). Furthermore, Gordon’s travelling urge meant that he left behind his partner and young son, causing emotional angst before he’d even left the county. On top of all that, Gordon’s route involved riding south through Europe then to Tunisia, Libya, Egypt, Syria and Jordan. This was before the Arab Spring kicked off… but only just. And a lone Western traveller might have thought twice about undertaking such a route.

Inevitably, this was going to be an ‘eventful’ journey. And to Gordon’s immense credit, he doesn’t flinch from revealing those events with us, however cringe-inducing they may have been. So I’ll not give too much away – oh, actually, I can’t resist. Just a quick flavour of the disasters, to whet your appetite: on the first attempt, Gordon and the Bantam get no further than the Alps before admitting defeat. In fact, the Bantam breaks down on the very first day of the expedition, before they’ve even left home territory, never mind the country!

And so it goes on… especially in the opening chapters, a catalogue of confusing mechanical problems which Gordon has to overcome if he’s ever going to get a sniff of a sphinx. He’s not familiar with the Bantam and it isn’t properly bedded in after an engine overhaul. The bike is equipped with a raft of sensible mods and upgrades, but any of them could be a culprit when it starts to run badly. There are times in the hot countries when the poor little thing can barely manage ten miles between stops to cool down, lest it seize (again). Every time Gordon stops to drink a pint of fruit juice, the Bantam needs twice as much cooling fluid applied to the exterior of its engine…

Gordon is made of far sterner stuff than me. I would have thrown the thing in a hedge before reaching Dover and limped home, claiming alien abduction.

But Gordon’s persistence pays off. As the journey progresses so he comes to terms with the BSA’s capabilities and with its limitations, and his spannering skills improve immeasurably. The trip becomes less of an ordeal and more of a genuine adventure. After the initial miles of mechanical agony, the story settles down to a steady pace through interesting places – where inevitably the people are as fascinating as the historic monuments and artefacts from antiquity. Inevitably, when the situation seems impossible Gordon encounters the most helpful people on the planet. Often they have almost nothing, and always they are willing to share it. His guide in Libya sounds like a wonderful chap – and I especially liked the Syrian truckers who included him in their washing routine before settling down to break bread. That’s what grassroots travel is all about.

I was also intrigued by Gordon’s report of the social situations in the countries he visited. Bear in mind that he saw these places before the civil wars, before the conflicts, before the bombings and the purges and the establishment of new social orders. And his conclusions definitely warrant consideration. 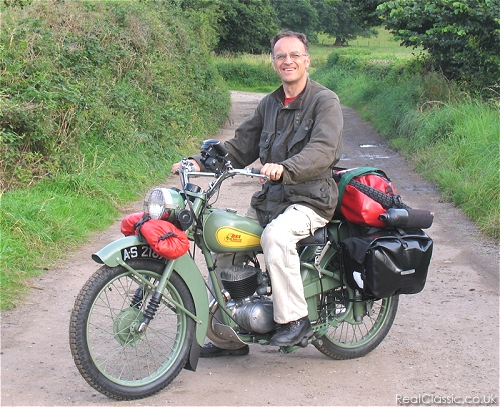 Gordon’s writing style is involving and easy-going. The main chunk of the book is told in the first person and in the present tense – not my favourite format, but it didn’t get between me and the moment too often. Like many travel stories, ‘Overland to Egypt’ suffers somewhat in giving us too much detail here and there, and I could’ve lived without knowing the menu of every single meal or the blow by blow account of each and every coffee bar or ice cream stall visited. There’s also an occasional editing glitch in the text; nothing major – just enough to remind the reader that this isn’t a mass market publication from a giant conglomerate. It’s a rider’s tale, written from the heart.

In setting out to ride a BSA Bantam to Egypt, Gordon aimed to emulate one of his idols, Peggy Iris Thomas whose exploits were recorded in ‘A Ride In The Sun’. Her journey was very different. 14,000 miles over a couple of years rather than months; no on-demand contact with home, old friends or family; the need to take casual work to pay her way – and no sat-nav, emails, online travel agencies or Skype, of course! By contrast, Gordon’s trip is an eminently modern journey, a short interlude of adventure shoe-horned into the demands of family and professional life. Yet he still encounters, experiences and recounts the same spirit which runs throughout Peggy Thomas’ original journey. Gordon’s willingness to test himself in unfamiliar circumstances, and to attempt what on the face of it appears to be a ludicrously optimistic proposition, stays true throughout to the example of his role model.

Now then. I’ve always wondered what it would be like to ride an old bike to Nord Kapp. How about it, Gordon? You do the riding: I’ll buy the book…

Overland to Egypt, by Gordon G May runs to 278 pages with an eight-page section of colour photos, and many mono photos and other illustrations throughout. It costs £9.95 in paperback or £13.95 in hardback from www.overlandtoegypt.co.uk/ overland_to_egypt_book.html