A little knowledge is a dangerous thing. Silence is golden. Frank Westworth ponders a clichÃ©-ridden life and concours cults…

‘It’s completely original and unrestored, you know. Just how you like to see them. And really rare these days.’ Proud Owner was plainly delighted with his excellent motorcycle, and I was delighted for him, I am not an unkind man. ‘It had only one owner before me, and he kept it completely standard, but he was an engineer so the maintenance is perfect.’ We shared further delight.

‘The mudguards are a different colour to the oil tank and toolbox,’ I suggested, no doubt looking as puzzled as I felt. Black is but a single shade, and although I could think of several amusing reasons for there being several shades of that absolute and definite colour on the same motorcycle, only one of them would have been possible if the originality claim was in fact a fact. The most common reason for varying shades of black is that powder coatings are usually a variable shade of dark grey, not straight black. No British bike builder of the early 1950s used powder coating to paint their bikes. They used enamel paint. Black enamel is in fact black. The difference between the cavernous black of Sunbeams and the more superficial black of a BSA lies in the number and depth of the coats and the surface preparation, along with polishing.

‘Why?’ I wondered. ‘Were they rusty? The rest of the bike looks amazingly rust-free.’ And indeed it did.

‘No, the guards were a little scratched and worn down to the undercoat here and there, so I thought I’d smarten them up.’

By powder coating them a very dark shade of grey? I was a little bemused, but that’s nothing unusual.

‘I painted the tank, too, but the chrome panels are original. And look at the engine.’ I did so, although I wondered why. It was an engine. Like many others. Handsome enough, but nothing remarkable.

‘The bolt heads and the nuts have no witness marks. That’s really original.’ No argument from me, although cylinder base nuts of that period on Triumphs were 12-sided, not hexagons. Maybe they’d run out of the correct nuts, way back then at Meriden?

‘The engine’s not been apart, then?’ I was a trifle bewildered by this obsession with the machine’s originality, but if it was important to Proud Owner, then that was fine by me.

‘No. It was running OK, but I stripped down the top end, just to check things. It’s better to be safe than sorry.’ I agreed with this completely, although my own days of stripping down a perfectly good engine to see whether I could cure that status are long behind me.

What is it with this originality thing? Why is it that so many otherwise apparently sane folk treasure originality above usability? I could understand it if Proud Owner never rides it (I have bikes like that) and accept that they’re just collectors’ delights (as mine are) or investments (as I wish mine were), but why would anyone suggest that their bike is original when it plainly isn’t, or that originality is a great thing in a bike they suggest is used on the road? I was going to write ‘pretend is used on the road’ but pretence doesn’t hurt like a shredded ancient front tyre. Pretence is sometimes good, then.

And what is ‘original’ anyway? Do all of us value this interesting and entertaining concept, or do we deride it? Or do we pretend to do one while actually doing the other? It’s all pretence again, isn’t it?

I once gave the Best In Show award at a show out east to a brand-new, fresh from the crate, never run 1975 Norton Commando. It was fabulous. It was utterly and exactly like a 1975 unused, fresh from the crate Norton Commando should be like … because that was exactly what it actually was. No pretence, nothing had changed. The air in the tyres came from Andover in 1975. Proud Owner cheerfully declared that he’d neither run nor ridden it. My awarding the prize was mischief-making on my part. I wanted to provoke a little debate. If only all my plans were so successful!

Almost everyone who commented on it was dutifully and predictably outraged. Norton Commandos were built to be ridden, they frothed, and they were indeed. However, this one was still actually new and unridden. It was a reference, if you like, a definition of what a new stock Commando was actually like. It was original. As the collective rage increased, I gently suggested that if Proud Owner actually wanted to ride a Commando, then he could; he could buy three or four of them for the alleged value of the new one. This provoked more rage, more vitriol. How dare anyone be so blatantly wealthy that they could afford not one but two Commandos! Outrage abounded. It was great fun.

But that bike was completely original (and it may still be; I have no idea who its owner is). Unlike the Triumph which I started this tale by telling you about. That was not original. That was – perhaps – better described as ‘mostly original’ or ‘lightly restored’. But why does it matter? Why does it matter to you (or anyone) what I (or anyone else) do to or with my own bike? I don’t mind what you do with yours, and I’m delighted if you want to share your enthusiasm for your bike with me. 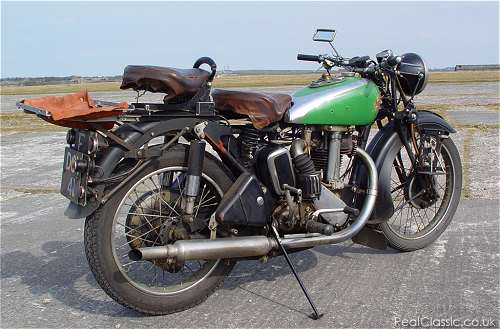 Just don’t tell me it’s all original when it ain’t, OK?