Numbed by the current obsession for producing shiny fake motorcycles where there was previously rust and ruin, Frank Westworth reveals a talent in the opposite direction…

I was sat pondering the other evening. Don’t worry, there’s no law against a little gentle pondering – not yet, at any rate, although that could easily change, of course. Earlier in the day, I had been enjoying a gentle trawl through the rusting piles of junk at a rather fine autojumble, as you do, and had discovered a couple of rare gems; invaluable spares for the weary wobblers which infest The Shed. ‘Invaluable’, as I discovered when I asked after the price of these rusty relics, is not a synonym for ‘inexpensive’. Sigh.

Of course, at the same grand Kempton Park event, I could have availed myself of brand new bits to replace the worn-out bits of the ’47 Matchless which had been occupying my thoughts and depleting my wallet. Improbably, the new bits would have cost about the same as the old bits, and would presumably have both fit the bike and indeed worked. But where is the challenge in that?

I am occasionally asked why it is that folk still break bikes for spares, rather than rebuilding them for the delight of posterity, whoever she is? And I have no real answer. I like rebuilding bikes. I find it therapeutic, unlike several of my esteemed chums, many of whom do not share this conviction (Riding Is Everything! they cry), I plainly do need therapy … or so it sometimes seems. But ’twas not always thus. In an earlier, gentler and somehow more tense yet relaxed age, I broke bikes myself … although by accident rather than for profit.

I have in fact a long and undistinguished history of destroying previously fine motorcycles. If you added up the worth – in today’s terms – of the array of motorcycles which I have transformed from stolid, solid plodders into immobile roadside wreckage, it could run into millions of pounds. Well, certainly into thousands, and many of them. Which is a worry.

My very first AJS was a non-runner when I dug it from a barn, and although with a little help from my friends I turned it into a (slow) runner, within a depressingly short space of time I converted it into a wreck. I did this in a potentially painful way; by riding it into the side of a Vauxhall Cresta.

In my defence, I should point out that although I was riding home from the boozer, late in the evening before my Biology A-level, the tubby Vauxhall performed an unexpected and unindicated U-turn in front of me, collecting me in its side as it did so. The AJS was a bit shortened by this, as was my temper, although the latter was cooled more than somewhat when the whole of Taunton’s rugby club first fifteen piled out of the car to see what had made that irritating banging noise…

But AMC Teledraulic forks are made of stout stuff, unlike the Vauxhall’s B-pillars, and after a little judicious kicking I was able to ride the bike home and for a while longer. I did the kicking, by the way; I was not kicked. Although it was close…

A lorry pulled up, rather remarkably. The driver, obviously a sympathiser, loaded the dead Matchless into the back and ferried me to London, through a blizzard. The bright side was that Geoffrey was forced to ride his Ariel through the same blizzard. I tried to convince myself that his life was in a darker place than my own. He was very cold and very wet. I had a seriously broken motorcycle.

Improbably, the crank hadn’t broken. Despite a long, long life of AMC destruction I have never broken a twin crank. Must try harder, plainly.

However, I had bent a rod, and AMC twin rods, in 1971, were a little scarce. More scarce than they are today, which is a bit odd if you think about it. I currently have about five pairs of AMC twin rods. In 1971 I had just the one. One rod, not one pair. Life was hard. The bike ended its days as the wreck which may illustrate this page if everything has worked out. It was a great bike. I loved it to bits. For my whole life since that day I have been searching for another 1961 G12, alternator and distributor model, to replace 321 KUP. Failure is a terrible thing. 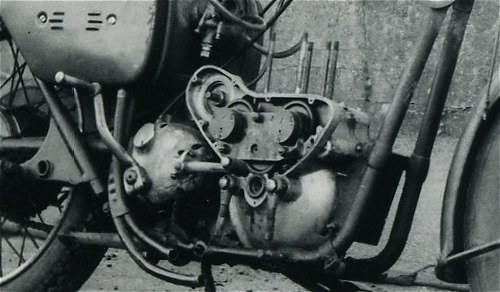 Life continued, as it so often does, and I destroyed many other motorcycles in a jolly spree which has yet to end. I completely ruined the engine of a Matchless G9 by holding the throttle against the stop as I rushed homewards to perform an urgent bodily function and failed to understand that the decreasing performance and increasing mechanical clamour were down to the timing retarding (or advancing; I’ve never been sure) to the point at which I first holed a piston then broke it up completely, taking out the entire engine as it did so.

I performed a similar trick when the dizzy I had fitted to an AJS 31CSR disintegrated (I never was good with delicate electrical things) and snapped the rear timing case extension clean off. And then there was…

You get the picture. Why do folk break bikes? Because idiots like me left loads of damaged non-runners laying about the scenery, and sometimes resuscitation is no mercy at all…