Riding old bikes produces many wonderful moments. Frank Westworth dredges through his memory for some memorable AJS and Matchless rides…

I accept at once that you ride your old motorcycle (perhaps it’s an AJS, or Matchless; no-one is entirely perfect) all over the place and at every available opportunity. In those distant days when the sun always shone, politicians told only the truth and our classic superbikes were one hundred percent reliable … well, so did I.

At about 1010, I would consider the weather and wonder whether I should take the overtrousers from the AJS Model 31’s unlovely topbox, where they lived amid a peculiar odour resulting from a spilled Chinese takeaway I’d carried home some years previously while the topbox had been fitted to a Honda. Decisions involving overtrousers and the weather were weighty indeed, and I needed to consult Bill, the Workshop Manager about this, too. More appalling coffee.

Work would sometimes – but not often – intrude between about 1130 and 1330, with a break of an hour or two for lunch, during which time I would inspect the Ajay to see whether it needed maintenance before being subjected to the ride home. It never did, despite my strongest hopes. And then, from about 1400 until 1700, when was the moment of blessed release, I would be entirely preoccupied with gazing from my office window at the bike parked below and wondering whether I should wash off the dead flies on the tank before I touched up the gravel grazes, or whether that was just asking for trouble.

The ride home was always blissful, and often involved a journey of about fifty miles, even though I lived only about five miles away from the factory. It’s odd how things work out.

Taking the old Ajay out for a canter was almost the best thing in life, back then, and I made excuses to do so at every opportunity. Which is one reason I became active in the local section of the mighty AJS & Matchless OC; the creatively-entitled Chester & North Wales section. I was there at its first meeting, you know. Well, I was young and knew no better.

That section, like one or two others, held a monthly ride as well as a meeting. The rides were great. Typically, the same two of us would ride off to some mysterious location in wild Welsh Wales, where folk were there few and of traffic there was even less. Great days. Rain, snow, pestilence and flood didn’t stop our adventures. I wore out tyres. And chains, and even swinging arm pivots and steering head bearings! Blimey.

On the first Wednesday of every single month a small group of idiots … sorry, I mean enthusiasts … would ride up to The Cat & Fiddle Inn, twixt Buxton and Macclesfield, for no reason that I can now remember. We would sit there, sharing the bar with the mountain rescue team and their husky dogs, shivering and drinking terrible coffee (this is plainly a theme) while the snow-ploughs did their scrapy thing and All Along The Watchtower played on the jukebox. Then we would slither and wobble our way back home again, rejoicing in the laser-like Lucas lighting to see us safely back to the familial hearth.

On every Sunday a chum who we’ll call John, because he’s called John (that is my favourite joke, by the way) would come around on his even more ancient, leaky and hideously painted AJS and we would rip up the tarmac together, terrorising some innocent Little Chef with our demands for toasted bacon sandwiches. Although such unbelievably delicious fare was never on Little Chef menus, no-one dared argue with John, who despite his pleasant, well-mannered faÃ§ade could easily have been a mad axe murderer – it took just a single look at his AJS to recognise that grim possibility.

John, you see, not only occasionally and confusingly referred to himself as ‘Baldrick’, he also referred to his innocent AJS as ‘Blackadder’, and during one of his intense maintenance sessions he even painted the legend BLACK ADDER upon its oil tank. Was nothing sacred? Plainly not. 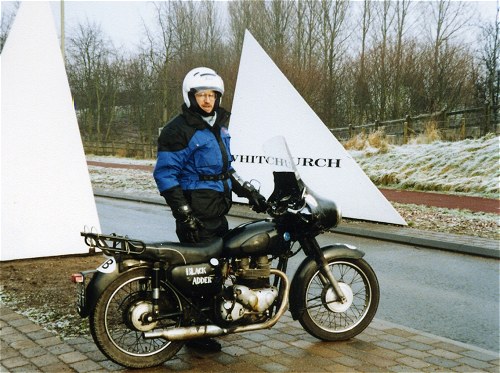 John and I would discover many mysterious and thought-provoking things on our travels. Take the accompanying picture, for example. Deep in one ice-lashed January, John and I discovered strange pyramidal structures at the entrance to my then home town of Whitchurch, Salop. What were they? Were they alien spaceships, sent down to steal away our womenfolk? Were they subtly secret housings for primitive Gatso cameras, set there to entrap unwary AJS pilots as we slashed by at 120mph? We will never know. One day they were there … and then they were gone.

As you can see, riding an AJS (OK, and maybe a Matchless as well) is a voyage of discovery, of education, of skill and triumph over adversity. Driving an Austin Allegro was never like that…