There came a point when both Panther and Ariel stopped building their traditional four-stroke motorcycles and switched over to two-stroke production. David Bullivant has a theory which explains why…

In recent issues of the magazine, we enjoyed looking at a nice Villiers-powered Panther (in RC36) but it was not said why Panther went over to making two-strokes painted maroon in the first place. They made a range of Villiers-powered models, some offered with a sort of Earles fork front end, others with telescopics, and then the Dyna-start fitted model. I think the Dyna-start was a German device; it was certainly used on a lot of German two-strokes of that period and not a few cars, even four-stroke examples, such as the NSU Prinz 4.

Fitted to two-stokes, they could be made to fire the engine so that it ran backwards, making a quick getaway sometimes rather hair-raising as the motorcycle/car started out going backwards. Indeed, the very reversibility of the Dyna-start provided the Messerschmitt bubble car with its reverse gear!

Onto Ariels and the Leader which featured in RC34. Why did Ariel go cap in hand to Germany to find a nice two-stroke engine to hang in a brand new design of motorcycle? 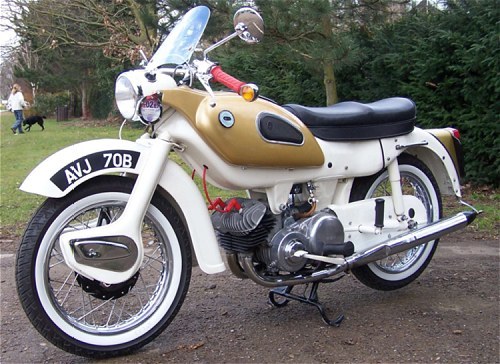 So why did Panther and Ariel give up producing four-strokes?

Both companies phased out four-stroke production at the same time; both companies came up with a two-stroke powered bike, or set of bikes, fitted with an engine other than their own. Really, the only difference was that the Selly Oak product stuck to Burman for their gearboxes, whereas Panther used Villiers engine / gearbox units (which were pretty fair copies of the Czech Jawa engine / gearboxes … but let’s not go down that lane just now). 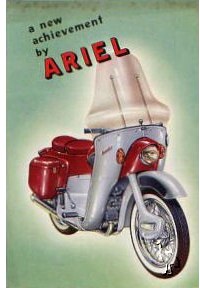 Again, one has to ask why did Villiers stop producing such ‘universally acceptable’ power units? Was it because they were not getting enough orders from other makers of ‘kit’ bikes, so continuing to produce for Panther was not viable? Panther could surely have found another supplier of engine / gearboxes in Europe.

And Ariels? Why did the Leader and Arrow suddenly die? Was it really because they were taking market share away from the Triumph Terrier engined BSA C15 250? Hardly! It was because suddenly Burman hadn’t any spare capacity to make a few gear sets for Selly Oak; they had such a huge contract with BMC making steering rack and pinions sets for the five hundred pound Mini; the Mini-van cost only £350 in those days!

So these illustrious makes, with a history going back to the dimmest and earliest times of powered single-trackers, were scuppered by their reliance first of all on Joe Lucas and then the one on Villiers and the other on Burman, both firms closing their motorcycle doors in the faces of the men sent to buy more parts … was this really the sad end to these two great makers?

What do other readers think?