That’s no way to treat a classic bike! John Kane revisits a simple land before heroes emerged from the back streets…

In 1971 choppers were becoming fashionable in Britain. Lots of 15 year-olds like me had Easy Rider posters on their walls. Peter Fonda and the other one (Dennis Hopper) were the epitome of cool sophisticated bikers. The rockers and their motorbikes from the early 1960s were tarnished in their relative oily rag presentation. Greats such as Thruxton Velocettes and Vincent Rapides had yet to be lusted after by callow youths and in 1971 were seen as old fashioned. Few of the general population of motorbike riders recognised their true value, but someone somewhere must have, as even then in an untidy state they commanded high prices.

To some of us, choppers were elite motorcycles experienced mainly in magazines rather than in real life. Motorcycle Mechanics in September 1971 and October 1972 featured choppers on their front covers, and carried articles about how to build a chopper and not to fall foul of the law. The September 1971 edition in particular had one cool dude on the front with long hair, a very smart aubergine penny collar shirt and loon flares, posing on a tastefully chopped gold metal flake hardtail Triumph twin, with extended forks, peanut tank and ape-hangers. Adverts of the time from motorbike shops had photos of King and Queen seats, high handlebars and trumpet exhausts that could be bought to bolt onto your motorbike. 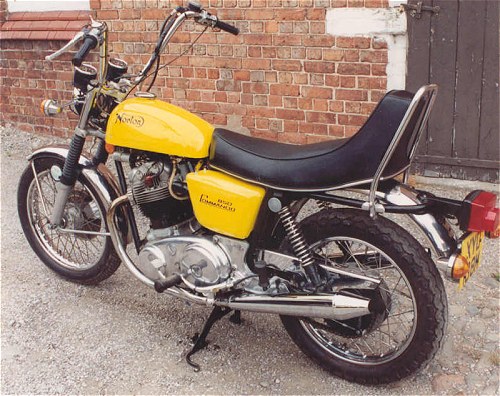 “Motorbikin’; moving on the Queen’s Highway looking like a streak of lightning…

“Whoo, we doing about ninety five, so good to be alive!”

…sang the retro rocker Chris Spedding. This was more in tune with the British experience than bouncing over potholes on forgiving but topping out springers.

By 1978, somehow like hippies, choppers seemed a little dated to me. As did the bearded long haired crusties who rode them. Personally I was beginning to favour the simpler custom bikes of the mid to late Sixties American style, ie. stripped down, tall and slim with wide handlebars. Gradually choppers were moving towards ‘low riders’.

There were always professional customisers, whose motorbikes were far more ‘finished’ in appearance. The October 1972 edition of Motorcycle Mechanics showed a frame ‘packed’ with Cataloy filler, ie. the petrol tank, strengthened headstock and frame were sculptured into one flowing unit. No bolt-on tanks here, but lovingly complex custom spray paint jobs. I wonder how all that filler has stood the test of time?

By 1979 the professional custom bike builders moved further away from the amateur achievable to the extreme. When I visited The Bike Show at Earls Court, there was a BSA B33 low rider, turbo-charged with a belt primary drive. This B33 had the latest in gold plating, which was now becoming a feature on custom built show bikes. My own B33 could not even stretch to a chrome exhaust pipe!

Stripped down B33s are beautiful, but gold plating? Who can afford this, or could park such a motorbike on the road? I must be missing the point. 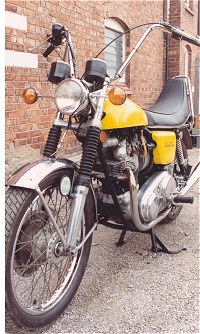 There was also a type of chopper rider emerging who was more Dennis Hopper than Peter Fonda, ie. long hair or no hair but lots of facial hair, only these guys looked like they had over the years consumed too many beers and cheeseburgers and developed a hobby of casually hanging out in tattoo parlours.
None of these were people you would want to have an argument with, but some of them – if you got chatting to them – were very nice blokes indeed.

When the Southport beach races were held in the mid-1970s, I remember seeing one of the local cut-off denim bikers being driven in a side car outfit with huge ape-hangers by a statuesque blonde haired woman. I was very impressed.

Most blonde women then were to be found adorning choppers in motorbike magazines or the Norton Commando ad campaign. Nowadays these women thankfully are more likely to be riding the motorbikes instead of being ornaments.

By the 1980s choppers were just too much of an investment for us mere mortals. SuperBike magazine in February 1981 featured on the front cover a 1650cc ‘Piggest Hog’ Harley Davidson with two semi-naked women. The hog was dripping in gold plate which frankly looked horrible. This for me was about where I left off lusting after choppers.

Currently low riders and choppers are in specialist magazines and their owners don’t seem to reflect the care and attention to detail to their own appearance that their motorbikes exhibit, but I am sure that is an illusion. It probably takes a lot of effort to follow custom bike riders’ fashion, not just anyone can look like they belong in ZZ Top (guys, you know who you are?). 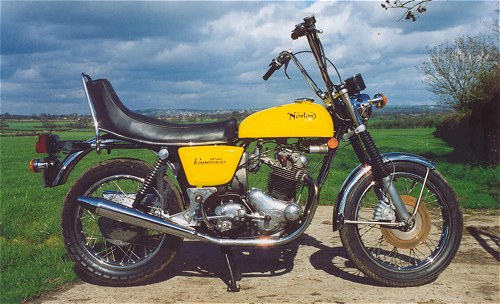 I still like choppers but cannot recall the last time I saw one on the road. I am all for any motorcycle, particularly pre-1980s, but prefer to see them on the road as opposed to show bikes. You might not like chopper and low-riders, you may think the Norton Commando Hi Rider deserves to have disappeared as ignominiously as it did. But whatever your view, the chopper phenomenon helped produce the styling of one of our most exiting looking motorbikes of all time, the Triumph Hurricane! What a beauty.

1983 was a significant year for me, and finally marked an end to my flirtation with choppers. It was in this year that a significant event happened. As I rode my BSA B33 into the youth banger racing project I was a volunteer at, I was enthusiastically greeted by a Moto Guzzi riding bloke some years younger than me who raved about my Retro motorbike and riding gear. Especially my Everoak Racemaster crash helmet, ‘Where did you get that lid?’ Now this left me a bit nonplussed, as in my eyes this was just my old helmet, jacket and motorbike.

Retro? At this point I knew that my self-appointed role as the spokesperson for a misunderstood generation was over; I had moved into a role as some sort of emerging eccentric classic biker…