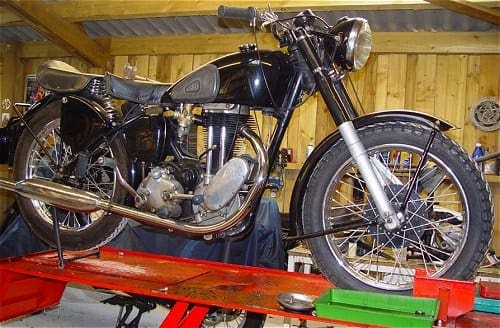 Great Things Are Afoot. Is Frank Westworth really going to sell a classic bike? Or even two classic bikes? Stranger things have happened. But not many…

It’s all true. Although I hate selling bikes, and although I am absolutely no use at all when bikes need to be sold, I am going to change things around in The Shed. This will involve … gulp … selling bikes.

I really enjoy buying bikes. I enjoy everything to do with buying bikes. Buying bikes is fun. Even when I fail to buy the bike I’ve been trying to buy, it is still great. Even when the bike I’ve bought turns out to be a pile of something unpleasant … well, it’s all part of life’s rich tapestry, and therefore fun indeed. Buying bikes is such fun for me, in fact, that at one stage I decided to start a magazine called exactly that: Buying Bikes. Couldn’t fail, I thought, and indeed I imagine that it wouldn’t have. Failed, that is. Buying Bikes – how could you fail to buy a magazine with a gripping title like that?

It is possible that I have bought too many bikes. In times of tension, I have been known to give bikes away rather than sell them. No, chuckle not; this is true. I have given away some perfectly pleasant bikes over the years, and last year I tried to give my most favourite-ever car away, mainly because I couldn’t face the thought of selling it. Happily, Rowena, my much Better Half, would have none of this, and realised £511 from the sale of the mighty planet-destroying, gas-swilling but entirely wonderful Deranged Rover which had been my bestest wheels for a whole decade. I couldn’t sell it. She could. And she did. So there.

When I decided that I needed to out a couple of the bikes from The Shed, my natural post-hippy, post-intelligence and post-affluence inclination was of course that I should give them away. As I said, I have done this before. I know how to do it. Giving things away results in a nice rosy glow which is only slightly sullied when the undeserving recipient sells the bike for an enormous sum a little while later.

I am planning to sell two bikes, and replace them with a single bike. So there. See if I don’t. Happily, only one of those bikes is an AJS, and I have a few others, but all the same, I do hate selling bikes. 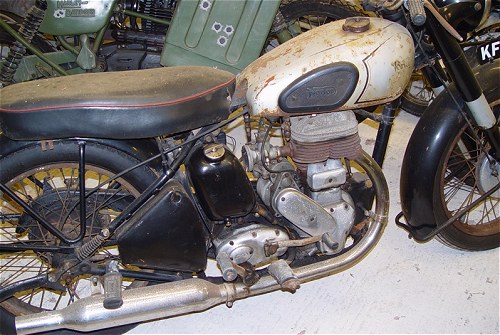 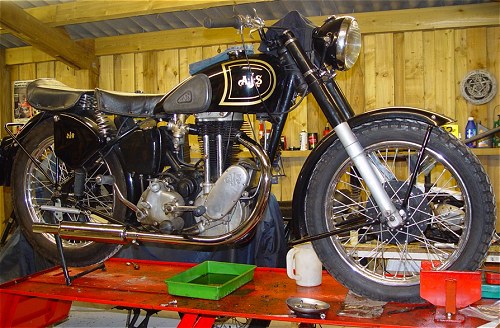 But the Model 16 has provided a load of fun. I fitted it with a new exhaust system, from the remarkably-named feked.com, which is indeed an email address to conjure with, and had a go at lining the handsome, curvaceous fuel tank with sticky tape, courtesy of Classic Transfers. Neither project was notably successful, although they gave me several chuckles (and provided laughter galore for visitors to The Shed!). I made it go and I made it stop. I registered it and retained its original numbers. I gave it a clean and sprayed it with Duck Oil, for reasons I cannot now remember. And to no effect, because it continued to corrode, lazily, as my bikes do.

But what is it for? I do, I confess, prefer the unrestored 1947 G80 to the rather more shiny Model 16. And, rather strangely, I can start the G80 more easily. Compression is a worrisome thing; the AJS has loads while the Matchless has little. How can this be? Who knows?

By the time you read these weary words, both bikes will have departed; gone over to darkest Somerset, where I know A Man With A Shop, a man who enjoys selling bikes, a man who will sell mine for me in a hopefully painless way. I shall then use the proceeds, all £511 of it, to buy the bike I should have bought before; a decent single with a decent electric start. A Royal Enfield with a history. The very same Royal Enfield which Rowena rode all over the country a couple of years ago. Hmmm…