Want to know what an Owners’ Club is really like? A65Bill dishes the dirt with the inside story of the BSA Owners’ Club recent AGM…

The issue of owners’ clubs regularly appears on the RC Message Board and tends to polarise views. It is clear from some comments that opinions are often (mis)informed by third party remarks of dubious reliability. A65Bill wormed his way into a recent AGM armed with his trusty (restored from scrap!) digicam, notebook and freshly sharpened pencil. What follows is the uncensored dirt which, for the first time ever, exposes the goings-on at the BSA Owners’ Club.

Everything that follows is factual, indeed some of it is shockingly so and necessarily carries a warning for the young and sensitive. At certain points in the event, to avoid compromising his professional standards, A65Bill, in the time-honoured tradition, ‘made his excuses and left the room’ before things went too far.

The journey itself was going well, until within striking distance of the venue, the double agent claimed a massive clutch problem and even suggested aborting the mission. A65Bill eased the tension by striking up conversations with a nice man who had a T120 in boxes and a T140 on the road (he promised to be at the Classic Bike Clubs Show on May 27th – and to go public if not given the secret code *bear & woods*) and with a tanker driver who knew a thing or two.

Eventually, Carole Nash sent one of her commandos to van the bike to the target location. Fearing an ambush on the way, A65Bill sourced some bottles of pop and made very rapid progress across country, taking full advantage of the cover of darkness. By the time the van arrived via the sat-nav route, A65Bill had already sacrificed his stash of RealAle and pre-prepared Chicken Korma, Vegetable Curry and assorted Naan to gain entry to the hall.

The morning proved that the subterfuge had worked and a hearty breakfast was enjoyed by all. Cliff the Treasurer even parted with some coins for the electric meter. An agent of the local Home Guard (photograph classified under the Official Secrets Act) mounted on a Squerfor called in to conduct 30 minutes of interviews and left satisfied. Much tyre kicking and friendly banter followed out in the sunshine until Kommandant Dave called for the opening of the meeting at 12 noon. 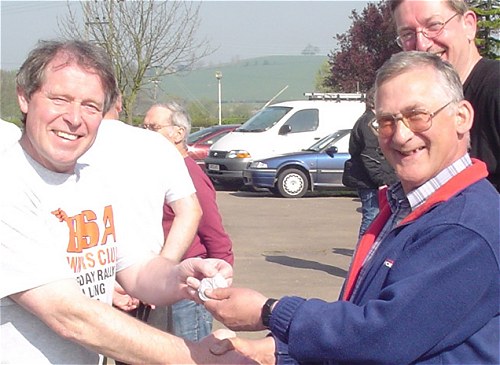 Sergeant Woodie provided valuable support, although at one point he had to change into uniform to avoid being arrested as a spy. A break in proceedings gave an opportunity for the assembled experts to descend on the reluctant A75 and effect a temporary solution to the clutch problem. Such is the way of Owners’ Club members.

A number of members were seen enjoying left-over black pudding, wrapped in stout pieces of bread, heavily spread with animal fat. Apologies to all veggies and vegans reading this harrowing tale.

Upon conclusion of the agenda, more banter and swapping of boxes of bits took place in the car park; no money was seen changing hands, suggesting that various barter and deals-in-kind had been arranged in advance. The Committee retired to a back room, evidently for more secret discussions and planning goodness knows what.

The clutch of the A75 failed again, confirming the diagnosis of a failing bearing and another logistics unit recovered it to base. 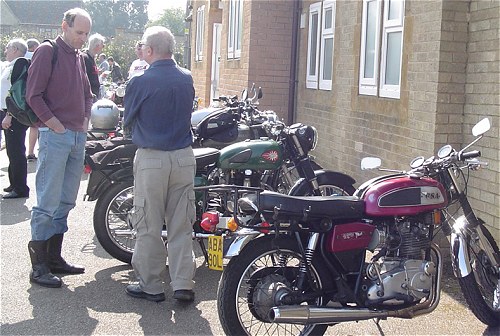 Full details of the proceedings of the AGM are not suitable for general publication, but will be released, after suitable censoring by the National Secretary, to anyone man or woman enough to join the club (see www.bsaoc.demon.co.uk). In essence, the Club is not about the AGM or the volunteer committee, it is about the people helping each other and about the bikes and using them.

The BSA Owners’ Club is not a business (it doesn’t supply spares or own premises), but it does provide an umbrella to represent BSA enthusiasts and negotiate special benefits for them. The Members’ Meetings (March and November) and the AGM (April or May) just help set the common rules and policies and keep the Branches in contact with each other.

If you’d like to find out more about the BSAOC, and don’t want to go under cover yourself, then it’s far simpler to attend their annual Open Day. In 2007 the club’s Open Day falls on Sunday June 10th:

Guests are welcome today at the BSAOC’s OPEN DAY which is part of their annual rally at Billing Aquadrome, Northants. All old bikes fans invited to drop in and enjoy the theme of girder forked and veteran BSAs, admire the bike displays, autojumble, regalia, ride-outs and so on. Camping available for BSAOC members. Great opportunity to see the club in action and join up on the spot!