Did you know that lots and lots of the very best, British-built AJS and Matchless motorcycles were exported to the USA? It came as a surprise to Frank Westworth…

While I was a youthful fledgling, fresh to the vigorous world of magazines and Editor of the AJS & Matchless OC’s mighty organ, I started to learn different. When I first occupied the Editor’s lukewarm seat at The Jampot, whose palatial office suite is even now refreshingly close to the RealClassic Shed, I discovered that the Club had members not only in the doughty UK, but also in the most exotic and indeed distant USA. I was completely surprised by that, may I tell you. I had in fact been to that very same USA only a few years earlier, and although I had managed to watch a most disreputable film in New York, I had completely failed to spot any AJS or Matchless motorcycles. In fact, all the motorcycles I had spotted, out in luscious New Jersey, had been Hondas.

Life with The Jampot provided an education in many ways, and the discovery that these great bikes had been sold to folk as far away as that broadened my horizons more than a bit. I was even more surprised to receive letters (this was long before the WonderfulWobblyWeb had been invented, and folk still wrote things on paper, using pens, and took photographs with cameras which produced prints which could be posted in those ‘letters’, as we called them. I tell you, they were strange and distant days).

Several fine American folk responded, not laughing at all at my ignorance, and revealed that while we in battered Blighty had our showrooms filled with heavily-mudguarded and sensibly comfortable touring twins, and singles which were the same apart from a certain lack in the cylindrical department, in the US (and other places, I discovered with horror and indeed shock) there were gaswillions of bikes laden with chrome and glinting alloy, where we had black paint and massive steel, as well as engines packed with power! I gazed at the first photo of a Matchless G15CS and wondered where it had been all my life!

In Chicago, apparently. I just had to have one of these. No no; I really must. I may have been more skint than a skint thing on St Skint’s Day, but I was going to have my very own G15CS. You see if I didn’t. Vast fast and tractable Norton Atlas power, as well as stonking stopping from the 8″ anchors? The stuff of dreams. I gazed at my own AJS 31 fondly, and dreamed of the day I could pension the old plodder off, replacing it with something so awesomely awesome that no-one would ever again kick sand in my face.

I’d never even seen a G15CS in the metal, but an AMCOC Notts & Derby section stalwart, Sir Nick of Daniels, had found a G15CSR in a supermarket near Long Eaton (if memory serves), had rebuilt it, rode it about … and offered to let me ride it. Stunned, I was.

There was worse to follow. Lord Anthony Curzon loaned me a Norton. Sorry, didn’t mean to blaspheme, but his Norton P11A was as much a Matchless as was a G15 … more so, in fact. And it was unbelievably superb. I rode it loudly through downtown Croydon (in those days I knew how to travel far and wide), and spent so much time gazing at passing shop windows that it’s a minor miracle that neither I nor passing pedestrians was murdered… I just had to have one of these fire-breathing and utterly salivatory monsters. But where could I get such a fiend? I scoured the Shropshire Star’s small ads and found not one. 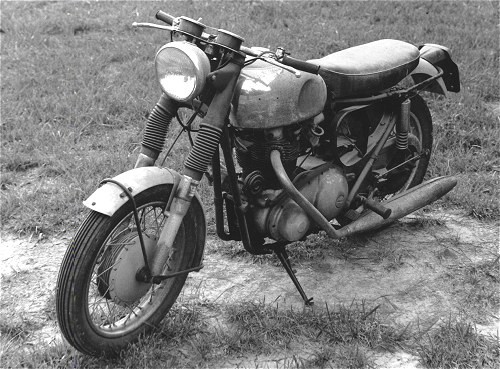 Then a man from Chicago, David Swain by name, wrote to me and asked whether I’d like one. He unkindly sent me some pics of it. He named a price which was so low that I almost wept. He offered to pick the bike up, put it into a crate and sort out the shipping. Americans are like that.

I sent him some money. He sent me the bike. It was magic, and I was in love. I was also so skint (see above) that I needed to sell it. Which I did. I did this three times. More folk sent me pics of superb machines – available machines, like the amazingly unrestored Matchless G15CSR in the pics which might accompany this story. I kept on buying them, importing them, running out of money and selling them. It was all so unfair!

But finally, finally at last, I kept one. It’s great. But one question still burns in my heroic, manly bosom. Why would anyone sane buy one of these machines (0-60mph in 0.001 seconds; flat out at 60.5mph; exploded at 60.55mph) in a country crisscrossed with vast straight highways? Life is full of mysteries…