Dave Wooding started his riding career with a Triumph 3T. He also rode a Bantam-based Villiers-engined oddity and a BSA B31, but it’s the Triumph 350 twin which he remembers the most fondly…

Everyone remembers their first time, but how many have a photo of the event?

I remember that for me it was on a vacated army camp and although it was all over in 15 minutes, it was enough to leave a lasting memory of the euphoria and the desire to have one of my own. I was well and truly hooked!

However, as first timer, my control was a bit erratic and a very large nail transplanted itself into the rear tyre necessitating the pushing of the Triumph 3T home across a bumpy field.

It was 1957 and I was only just 14. My older brother Ken had bought the 1951 Triumph 350 after years of pedal-cycling his RJ Quinn racing cycle, with the purpose of increasing the range of his outings. The 3T was nicknamed ‘Ironsides’ and to this day the mention of the name evokes a peculiar feeling of fondness.

When Ken offered me a ride on the 3T, I jumped at the chance. He gave me (and my camera) a lift on the pillion and, in the late fifties, helmets were not a legal requirement so woolly bob hats served the purpose.

We rode to the nearby deserted army camp. Most of the huts were demolished but the roadways were intact. After brief instructions I set off, Ken recorded the scene, well, just about, and I even managed to get into second gear before the puncture cut the excitement short, leaving me desperately wanting more.

Ken was studying for his HND at the time but after two more years he eventually reached the end of his deferment from National Service and joined the RAF. Guess who got to look after his bike when he was posted to Aden in the Gulf?

What damage had been done in the intervening period may have been the cause of the big ends failing on a return journey from North Wales one fine day. The ticking turned into a knock and the knock became more pronounced over the 15 miles or so before the entrance to the Mersey Tunnel and the engine emitted a wonderful haze of blue smoke as it overheated. The tunnel walls echoed the sounds of the disintegrating engine effectively but not enjoyably, and by the time the one mile length of the tunnel had been covered, the knock had turned to a clank and the engine eventually seized fifty yards from the exit. Being full of youthful energy, and in a hurry, I pushed the bike up the sloping exit before the tunnel police arrived and after another 300 yards stopped, exhausted, near an amused bus queue.

With another six miles to go, I gave the bike a kick in the hope it might start. Unbelievably it did. So, in as ‘matter-of-fact’ manner as I could, I pretended to the bus-queue that the clanking and smoking was perfectly normal.

Home was reached by engine power and prayer.

A brand new flywheel assembly was surprisingly located and delivered in person by the wonderful dealer who happened to be visiting Merseyside the next day, all for £4-7s-6d. The greased cloth wrapping was still on it. Brand new! 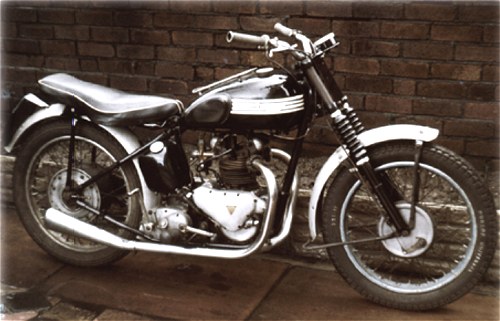 It was also about this time that the MOT came in for 10 year old vehicles. Now that was a challenge! Well do I remember finding that the local bus depot would test motorcycles. The brake test facility preceded rolling-roads and used an elevating ramp about 10 feet long with a hand rail down one side.

You sat on the bike half way along the ramp, with both feet on the footrests and with one hand on the rail to steady the machine. The rear brake-pedal had to be firmly depressed as the man wound the hand-winch to lift the rear end of the ramp to the appropriate inclined angle as indicated by the swinging pointer. If the bike moved forward meanwhile, you failed. The clever bit came when changing to test the front brake. With the ramp still inclined, you had to pull hard on the front brake-lever before releasing the rear footbrake, in the mistaken belief that the front will be the better brake of the two. We had some hairy moments and that ramp was very steep!

One year, knowing that the rear drum was oval, I had locked it in the best position. We had successfully reached a hitherto unperceived elevation with the lowest part of the bike some two feet off the floor and some distance from the hinged end of the ramp. If I released the rear brake by accident we would have shot down the ramp and there was a very large bus sized inspection pit in front of us. The front brake was poor, the cable worn. I leave the rest to your imagination. Fortunately I kept my foot hovering over the rear brake pedal. Anyway, we passed the MOT on the retest next day with a new cable fitted.

When my brother was finally demobbed, (he was one of the last service men under the compulsory National Service and I missed being called-up by six months), he gave me the 3T for myself and bought himself a two year old 5TA Speed Twin complete with Avon fairing and panniers. So, I was now able to be more adventurous with the mods to Ironsides.

Hands up if you remember the winter of 1963? I used Ironsides every day for work for the 17 miles round trip during the three months of ice and snow. She went beautifully, even when the temperature dropped to the record 20-degrees below and I only dropped it three times on the solid ice. As I was working in the boiler house at this time, we had a pot-bellied stove in our work-shed and an ample supply of coal to keep us warm. It became a regular thing to remove the bent footrest, heat it in the stove, straighten and refit it during the dinner break. 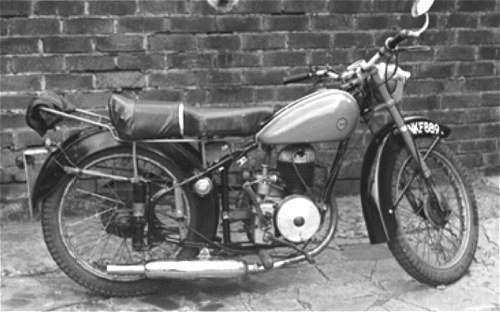 During this time I had also acquired a Bantam based Villiers-engined 197cc ‘oddity’ that went like stink and could be steered easily by the pillion passenger, as my fellow apprentice discovered much to his mischievous delight. The ‘Oddity’ and the 3T were also joined by a BSA B31. Advertised outside the shop as a ‘man’s bike’, I mean, who as a teenager could refuse a bike so advertised?

The BSA took my girlfriend and me to the Isle of Man on holiday where in one of those unexplainable moments I told her I loved her and she consented to be my wife. There was one other moment when I thought we would not survive to break the news at home when the throttle wouldn’t shut off going down a steep hill outside Peel. Feeling around the carburettor with my left hand and pulling like mad on the brake with the other, it became obvious that something had found its way into the bell mouth and was preventing the slide closing fully.

Aha! It was one of those light-bulb experiences. The toggle on the end of the cord around the bottom of my anorak (yes — anorak) had been sucked in. Opening the throttle wide briefly and pulling the cord with the left hand released it. Was this also a first?

The proposed responsibility of marriage meant changes had to be made. The lovely shiny BSA with its Tri-point screen had to go to buy a more suitable means of transport and was replaced by ….wait for it… a Reliant van. Oh the shame of it. But it kept us dry and was considered by the in-law-to-be, as more respectable than a motorcycle. I had not yet got a licence for a four wheel car yet, even so, I had taught myself (legally) to drive in a BMW Isetta bubble car, with reverse, that a ‘friend’ had conned me into buying from him for £25. It was sold after three months for £50 but my conscience troubles me to this day. There’s a few stories to be told about these two three-wheelers, but some other time maybe. Meanwhile, I continued to use the Triumph and the ‘Oddity’. 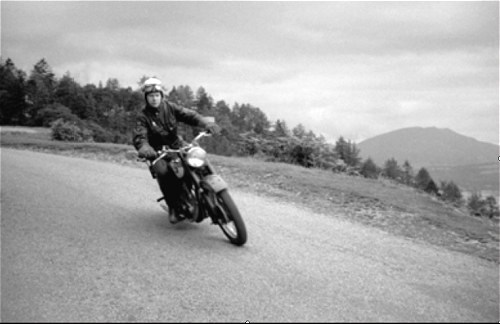 Some years later with a family on the way, the Triumph was eventually sold to help pay for a proper car then, after another year or so, was bought back again with the engine blown up. It was slowly refurbished over time but lay in the shed for some years with its replacement engine, a new paint job and the sprung hub changed for a donated rigid wheel. Succumbing to money pressures, the Triumph was eventually sold again, this time to a keen ‘Rocker’ type around 1971 and was seen alive the next year at the Aintree Race Course at a local bike race day.

Does anyone now know of a 1951 Triumph 3T registration number MFM 924? If so please let me know. I would love to renew acquaintance with it for a third time.

Over the years, I have bought and sold numerous bikes, old and modern, large and small, powerful and quaint, British and foreign, in an attempt to relive those first exciting moments. I still let out the occasional song of pure delight when it all comes together. There is nothing quite as enjoyable as a pleasant ride through the country lanes.

I currently own a 1992 350 Indian Enfield in trials mode, a R65LS BMW and a recent GS500 for reliability although the Suzuki is giving way to a BMW R1150R soon.

But that first time thrill is still special. Over time, riding has progressively become, like lovemaking, more relaxed and enjoyable in a different way as the years have rolled on.