This year – this week, in fact – there have been two competing motorcycle shows in London. Martin Gelder tries to pick a winner while making “vroom vroom” noises and bouncing on seats…

The Ally Pally show sponsors MCN announced last year that the long established event at Alexandra Palace in North London would be moving to the Excel venue in Docklands. Shortly afterwards, Superbike magazine announced that they would be picking up the reins and hosting a competing show back at Alexandra Palace the week before MCN’s Excel show.

Confused? I’m not surprised. Does London need two motorcycle shows? If it does, is there any point in having them take place on successive weekends? And, perhaps most importantly, which one is most worth attending?

There was a bike show held at Excel several years ago. I went and it was deserted; there were more exhibitors than customers, and there weren’t that many exhibitors. On the other hand, I really don’t like Alexandra Palace as a venue. It seems crowded even when it’s half empty, the exhibition space is a tangle of random and oddly connected rooms, and it’s awkward to get to by road and by public transport.

What a choice. In the end, I chose the Excel show because it’s easier to get to for me, because a couple of companies I wanted to see would definitely be there, and because I’ve been to Ally Pally too often and fancied a change.

First impressions? Go on a bike or using the Docklands Light Railway, or face a £3 an hour charge for parking in the vast covered car park. Pay and display means you have to try and guess how long you’re going to be in there which probably leads to a lot of people overestimating and overpaying. Parking at Alexandra Palace is free for cars…

Things pick up once inside the exhibition, which is split into two light and fairly airy halls. One of the overriding criticisms of the Ally Pally show in recent years is that there has been no support from the motorcycle manufacturers; a motorbike show without any motorbikes to sit on is like a bacon and egg sandwich without the bacon. 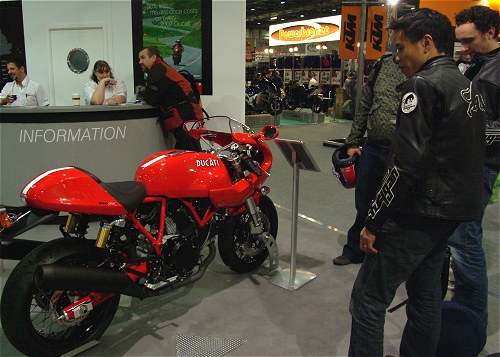 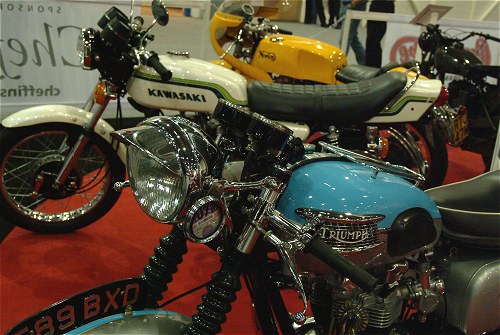 Which show is best? In my view the Excel venue is by the better of the two despite the additional cost of car parking. It was a pleasure to walk round the two halls despite the show filling up with an unusual mix of despatch riders, biking commuters and suited city types as people working nearby or simply passing through the area stopped off at the show in the early evening.

The Excel show lacked little that I’ve seen at Ally Pally in recent years, and having bikes that you could sit on made a real difference. I know I’m going on about it a bit, but having motorbikes at a motorbike show is what lifts an exhibition from being a t-shirt bazaar into a credible event. 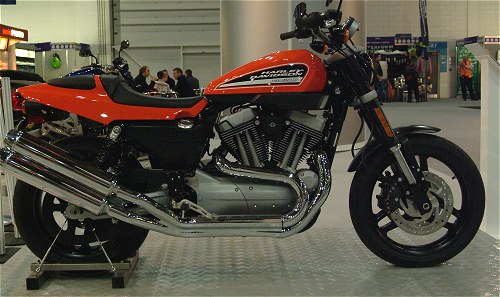 If you to Alexandra Palace to meet up with your mates in the bar or because it’s on the way to the Ace CafÃ©, then Excel will be no substitute. If you want to look at a range of bikes from several manufacturers in one place, or talk to the exhibitors about their products, or do a bit of bargain hunting before spring, then Excel gets my vote.