If you want to ride your classic bike roughshod, then you simply can’t beat the real thing! Frank Westworth’s been playing in the dirt…

Before I say anything else, may I share with you my complete amazement when the AJS & Matchless OC, a very fine club (official) presented me with an award last year! I want to thank everyone concerned for this entirely unexpected trophy. For reasons which continue to elude me, the club presented me with The Ambassador’s Shield, also known as the Basil Chilvers Shield, and apparently it’s for promoting the marques and the club. Doesn’t everyone do that? It brought a lump to my throat when Mr Jampot Editor Chris Read produced a plastic bag containing the handsome shield, and then, to prove it was not a dream, he paid for our fish’n’chip lunch. That is rare, I can tell you…

I have been having a wild old time of it lately, what with giving up the day job to concentrate on RealClassic magazine, produced by Rowena and I from our clifftop eyrie in an unfashionable part of Cornwall. And I have acquired a bike which is possibly the best AMC twin I’ve ever ridden … but more of that another time, I think. The Previous Owner may yet change his mind and demand the CSR’s return!

When I was a lad, slender, clever, dark-haired and prone to assisting folk my current age across the street, lots of us attempted to turn the lumpen ruins which were all we could afford into much more super-duper motorcycles. Most of my chums wanted to be pretend racers, and fitted clip-ons, rearsets and swapped engines like there was no tomorrow – which was alarmingly close to the truth in several cases, given the way they rode. The more sane of us went down another, darker, less glamorous path. We fitted knobbly tyres, big wide handlebars, and threw away all the excess weight – which, on a G3 Matchless is quite a lot. Have you ever weighed an E3 dynamo?

The muddy route was always more credible than the hardcore highway hero way; can anyone look sane pretending to scratch around a housing estate on a stripped down 1954 jampot AJS Model 16? Even an Ajay 16M fitted with alloy guards looks daft with clip-ons, so forth. But I mustn’t knock it; several of my chums have been this way. I preferred the notional trailbike approach, not least because there’s less backache involved, which is important now that we’re all a little older than we were. 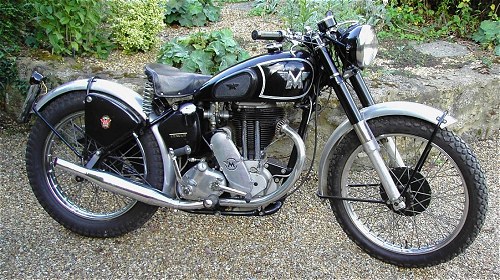 That 1948 rigid G80C was also a great memory jogger in another way. It reminded me how bikes from the immediate post-war period were jacks of all trades, unlike the later comp machines which were very unlike the roadsters from which they were allegedly derived. I had the pleasure of riding Malcolm Arnold’s late G80CS, and it was indeed a truly tasty tool, but it had a certain seriousness of purpose about it which the rigid beastie did not.

That G80CS was much more developed, much more competent, and beautiful in red, but I would want to have one in The Shed only if I could have another less serious machine for those less serious moments. The G80C would make an ideal bike if you could only have one bike.