Roger Bibbings suggests that while speed itself may not kill, you don’t have to travel at 180mph to enjoy yourself on two wheels…

Speed kills? Well, momentum increases as the square of velocity – so as speed increases the energy to be dissipated in a collision increases very rapidly indeed, more than is generally appreciated. But speed itself is quite benign. For example, we are all travelling through space at many hundreds of miles an hour as a result of the earth’s rotation – so it’s all relative.

Putting to one side the requirements of road traffic law, the basic rule that needs to be applied to ensure safe management of speed in the road environment is the old adage, ‘never travel so fast that you cannot stop safely on your side of the road in the distance you can see to be clear.’ And this in turn supports the principle of ‘always allowing yourself sufficient time and / or space to cope with the unexpected, including your own and other peoples’ errors’.

Of course, choosing the optimum speed in any setting is all a matter of judgement and there are quite a few variables: tyres, brakes, road surface, angle of lean, line of sight, general visibility, reaction times and so on.

Recently, while on a long commute on the trusty R80RT, I came upon a tragic motorcycle crash in which excessive speed was probably a contributory factor. The two hours spent chatting with other motorists (and two other motorcyclists) held up at the scene while the emergency services did their work, provided plenty of time for a sober exchange of views on the case for and against speed limits and their enforcement.

Speaking personally, the price of fuel, the limitations of an older machine (not to mention rider), a desire to keep my licence points free and the unpredictable behaviour of other road users all combine to mean that nowadays I rarely travel at high speeds and I generally observe limits, especially in towns and villages.

On the other hand, as the performance capabilities of modern machines continue to increase one can understand why many riders find such restrictions irksome and treat limits with contempt. Youth cannot be suppressed of course. But whereas in the 1960s I would blat about at 80mph, today’s young rider might aim at 180!

The thrill of speed on two wheels is undeniable but also I would suggest quite relative. I find that 60mph on a sweeping mountain road on my oily Ariel VH easily trumps travelling twice that speed in a straight line on a modern superbike.

If you really do want to explore the potential of your modern sports bike, then recognise the limitations of our crowded public roads and try a track day.

Otherwise, invest in a classic and have just as much – if not even more – fun. 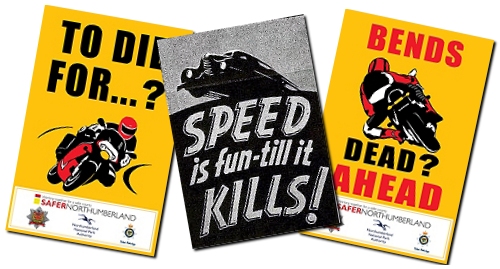