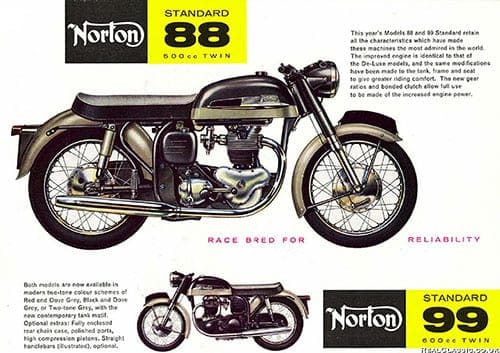 If a bike from yesteryear was rubbish when it was a new bike, does that mean it’s still rubbish now it can claim to be a classic bike? Frank Westworth contemplates classicness and other fantasies…

A man gazed at me in what may have been wonder. It may also have been fright, admiration or horror. Sometimes it’s not easy to tell. He juggled with his brains, Prometheus-like, for a further moment, and then he spoke.

‘They’re crap,’ he announced, darkening my lightness. ‘You must be off your head.’ Which may or may not be true, how would I know? By any definition of madness, the mad would struggle to recognise it in themselves. He could of course have intended to reveal to me that I was inebriated, but given the time of day and the fact that I was standing upright without assistance, that seemed unlikely. It’s all a question of context.

‘They’re really crap.’ He was warming to his unsavoury and impolite theme. ‘Didn’t you once write about them, saying that they were crap when they were new and they’ve not improved with age?’ No-one loves a smartarse, and I reminded him of that glad fact. He ignored me. A wise man, perhaps. If a slightly brave one.

We were admiring a Norton twin. Well, one of us was admiring it. The other was heaping scorn upon its silly fat-arse tinware. I told him that there was subtle beauty beneath the bulbous bottom. He sneered. I reminded him of the eye of the beholder; biblical references are handy in a time of disquiet. Ask any priest. Eyes are too easily plucked out, I reminded him further, warming to my biblical theme. He laughed. Life can be cruel.

The Norton in question was not some ground-shaking, bone-rattling Dominator, although had you been viewing it in the dark from a distance of a mile or so and through fog you might have mistaken it for one. Had it been a Dominator, of course, it would have merited much admiration and awe-struck whispers regarding its classicosity and vast worth. Navigators are not the same. I have always understood that a Navigator is not a Dominator. I enjoyed a grammar school education, and know these things. In some ways, as I sternly announced to the man standing by me, who was proving that maybe he was not the friend I had mistaken him for, a Navigator is preferable to a Dominator. I reminded him, with mounting fortitude, that The Shed contains several Norton twins, but not one of them is a Dominator. I do not generally like Dominators. I certainly would struggle to pay the sort of prices asked for Dominators. In fact, I might raid the wallet for a Model 7, maybe a 77 and certainly a Mercury, but 88, 99, 650SS or Atlas? Nah.

But The Shed does contain a brace of Norton lightweights; a Navigator and an ES400 Electra. I like them both. They have much to recommend them beyond the name on their fuel tanks. I could list their many fine features, but space is limited, as is The Reader’s patience, and I am unsure who would fall asleep the sooner; you or me. 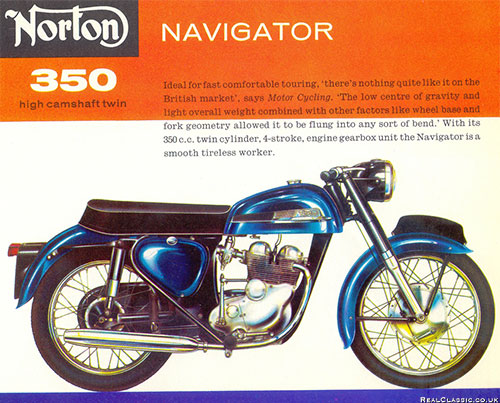 But I had indeed once written that they were crap when new and had not been improved by the passage of time. I meant it when I wrote it, which makes it true. Or honest, at least. I would not write that now, because it is no longer true … for me. The bikes haven’t changed. I have changed. The world changes. Change is the only constant. Why should something accepted as fact in 1996 remain an accepted fact in 2015?

A recurring and constantly tedious dirge at gatherings and throughout the mystic ethers is that there are no affordable classics. I have always thought this to be arrant rubbish. How do you define ‘classic’? And my definition of ‘affordable’ is not likely to be the same as yours. You may consider a £30,000 Manx to be both classic and affordable, for example. I would rather have an ES400 Electra, which hopefully you would instantly dismiss as cheap junk and not a proper Norton.

Perceptions change. Back in 1996 I would never have considered spending money on a ratty lightweight Norton; they were worth nothing to me. I didn’t want one. Now I have two and delight in their comedic effect upon those more knowledgeable than I.

Back in 1996 I was privileged to ride a Kawasaki twin, a Z750, which a man (another man) was attempting to define as an affordable classic. I thought it might be quite pleasant in desperate circumstances, but why bother? Kawasaki themselves did it better when they launched their W650. Next week* I am going to test-ride a Z750 twin for another old bike magazine. If I enjoy it – and I hope that I do – am I being dishonest to describe it in favourable terms? No, of course I’m not.