Old bike clubs are right at the core of the classic bike scene. Frank Westworth has belonged to many clubs, but wonders whether the excitement is all too much…

Whenever I have paused to think about it, I have always wondered why bike clubs are so popular. Think about this. One of the reasons we (OK; ‘I’) enjoy motorcycling so much is the solitude of it. The absorption of the experience involves being alone; riding a motorcycle – ancient or modern – demands concentration. I cannot imagine trying to ride a motorcycle while my attention was being demanded by three other people, a radio, a vocal on-board navigational system and the constant demands of the cell phone. No. When I ride, which I do as much as I can, which is a lot, I ride alone.

Mr 1%, then? No, not a bit of it. I just enjoy being alone in the middle of our increasingly crowded society. So why have I always been a clubman? It’s true. I have always been a member of a bike club, very often of several of them at once and almost all of them marque clubs; clubs whose members share some misplaced admiration for a particular manufacturer. And all of the time I have been a clubman, I have asked myself why that is, given that I usually prefer solitude.

Back when old Brit clunkers were correctly perceived as being exactly that, there was a sort-of safety in numbers; a sort-of mutual support and sympathy system. And clubs were small, had a few hundred members at best, communicated sporadically by means of smudgy Xerox newsletters and invited their members to meet up to drown sorrows and share tales of misfortune, misadventure and heroic drinking. They were also great places to find worn-out replacement bits to replace the worn-out bits on your generally worn-out old clunker. The Great Truth that all machines tend to wear out the same bits was yet to be discovered, as indeed was the ‘classic’ bike. At one point my shed contained about a half-dozen 350 AMC single engines, all of them with completely worn-out drive-side mainshafts. What I needed was a single drive-side mainshaft in good condition. Entire engines were available … new mainshafts were not.

So marque clubs started sourcing spares for their members, who invented ever-more creative excuses for riding a new Honda CX500 instead of the ailing Dayton Albatross which they truly believed to be the best bike ever invented but for which that essential legshield grommet had been unavailable since 1962 and who could venture into the wide world without that very grommet? Hurrah for clubs.

As marque clubs grew ever bigger, there was inevitably that occasional rumble of dissent. While the committee focussed with selfless devotion upon ensuring that rigorous safety standards were applied to the bouncy castle, children’s playgroup and needlework sections of the annual rally, the unreasonable minority drizzled ever more irritatingly about the perceived lack of focus on motorcycles. Old motorcycles.

Several enlightened marque clubs introduced closed-to-marque events which allowed entry only to members mounted upon machines of the marque. And inevitably another minority screamed, frothed and raged at the insidious elitism of this, demanding to know why they were refused entry to their own club rally simply because they had arrived in the Volvo? They were, after all, wearing their Spagforth Fullthrust T-shirt and ‘I’d rather eat worms than drive a Volvo’ hat. Which is what it’s all about.

I know, I know; it will never catch on. 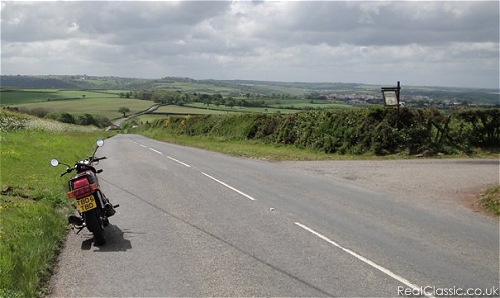 Around the same time, I wondered with increasing despair why I was a member of so many clubs? What did I actually get from it?

When I sat, for the very first time, considerably nervously and aged very young, around a marque club’s committee table, a doughty and terrifyingly knowledgeably clublady asked me The Big JFK Question. Was it not right, she wondered, to ask what I could do for my club, and not what my club could do for me? I considered this to be dead right-on, and adopted it as my Official Way Of Thinking. And indeed I do keep trying to remind myself that this is still the right way.

But it is getting difficult. As the new year sputtered into a dark and gloomy start, showing as much enthusiasm for starting as that Spagforth Fullthrust after two decades of neglect, so the annual demands landed. I let them pile up a little while I thought about it. Some club memberships are quite expensive, and what, I asked myself, do I get for my increasingly hard-earned money?

The answers were sometimes impossible. Too often, the answer was that I get nothing. It is true that we tend to get out of something what we put into it, and the truth is that I am disinclined to put much into a club which boasts a property portfolio and has a cash-at-bank balance bigger than a small motorcycle manufacturing company. They need my money less than I do.

What can a club which boasts more employees than my own business and should surely be more profitable, want from feeble weedy me? I thought hard about this. The club sends me a magazine. I have a magazine of my own and I can fill that with stories I actually want to read. It could send me spares for the Spagforth. So can several other traders, and in any case I don’t need many of them. It can invite me to attend an event. I go to bike events all the time. What else does my membership get me? Does being a member increase my delight in my Spagforth ownership? And if it does not, then why am I a member? I answered my own question. Then I wrote several renewal cheques with a happy hand. Several less than last year though…