If his choice of bikes isn’t terrible enough, the fact that he can afford one is worse! Frank Westworth is as bemused as ever…

Welcome to a strange day. It’s not every day that a chap’s email inbox gets filled with mail, mostly from strangers, announcing that one is being got-at in the pages of the world’s allegedly number one motorcycle weekly. Or at least, in its online incarnation.

Bewildering stuff, huh? Of course I needed to rush and investigate, reflecting that it’s a good job that reading it would be free; I dread the very notion that I may need to pay real money to read folk being rude about me. But it was true. Share with me my surprise and amusement. Despite the pseudonym, the chap making the odd comments about your ’umble scribe was easily identifiable. In fact, and you will be as surprised, nay, astonished by this as was I, he was an ex-editor of a too-familiar motorcycle magazine! Why hide behind a pseudonym? If you feel a strange need to snipe in print; put your own name to it, like a grown-up.

My sin, my hideous transgression from the norms of accepted behaviour, was revealed when I read the story to which it referred; a story also carried briefly in a recent copy of that same magazine. The story was about Norton’s Domiracer, a new(ish) bike apparently and allegedly poised to take the race tracks of the world by storm. I personally consider this to be unlikely, merely more jolly promo puff from a company which is excellent at providing headlines; headlines being far cheaper than adverts to sell bikes, for example.

The alleged new(ish) world-conqueror from Norton will apparently come with a price tag of around £24,000. That’s not entirely cheap, but it may well be worth the money. I will never know. However, I do know that the roadgoing motorcycle which shares the fantasy bike’s powertrain is a fine piece of kit indeed. How do I know this? Did I read all about it in the pages of sundry august (and otherwise) publications? No. No I did not. I know because I bought one. Me, myself, with my own money. I have a current Commando, a 961 Sport, handsome in black. It is excellent.

My crime against good taste and humanity according to the dork who was abusing me lies in the fact that – are you ready for this? – I could afford one. It cost £12,600. In my view it’s worth every pound. And to provide you with a couple of comparators; at the time a Ducati Multistrada would have set you back £12,750, a Diavel £14,995, while a BMW R1200GS TE was £13,816 and a Harley-Davidson Electra Glide Ultra Limited’s entry price is £21,195. These are all big twins, like the Norton. In comparison the Norton was a snip. And I actually wanted a Norton, not one of the others, of undoubted excellence though they may be.

Receiving criticism for my choice of bikes is a familiar song, but being criticised because I can afford one… what on earth is that about?

Moving on, because a chap should be impervious to pseudonymous insults – and indeed I am that chap – it is more apposite and amusing to consider two other pertinent factettes. Parked next to the 961 Sport in The Shed is another Norton Commando, a 1975 Mk3 Roadster, rebuilt – nay; re-engineered – by Norvil Motorcycles, of whom you will have heard. That’s fact one; I am such a cad and a bounder that I own more than one Norton. It is indeed a tough life. Fact two is that the two very different Commandos cost about the same. If you want a new Mk3 Commando from the very excellent chaps at Norvil you will need to wait three years and pay out £16,750. Plus VAT. 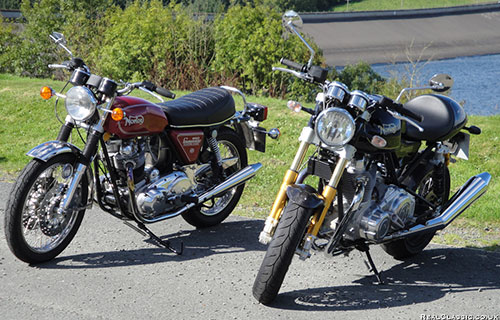 And can you guess which of these two objects of shameless self-indulgence gets the more use? Did you say the new one? You’d be wrong. The Mk3 Roadster gets far more use. It suits my kind of riding far more than does even the least sporting of the current breed. I prefer it in every way, from its riding position to the way it does what it does. To be honest, what it does is less than the 961 in performance terms, but when Les Emery rebuilt it I asked for – and got – the lowest possible state of tune, a single modest Amal carb, and the best possible brakes. I can thrash about like a maniac on the Mk3 … if I tried that on the 961 Sport I would probably become a dead or a maimed maniac, because that bike is far better than I am a rider. Simple as that.

Excuse me for waxing irrational and jingoistic for a moment. I am completely delighted that I have been able to buy a brand new Norton. I was last able to perform that gentle stunt in 1991, when I bought a new Commander, which I still have and aboard which I cover more miles than on the two Commandos combined. I wish Norton nothing but good. I am irrationally happy when I meet other owners. I am delighted for them. We laugh together at our bikes’ charm and character, things like that. One man I know owns three of the things. Should I poke a green finger of envy at him because he can afford what I cannot? Do not be daft; I’m delighted for him. How could it be otherwise? Some people can be very strange… 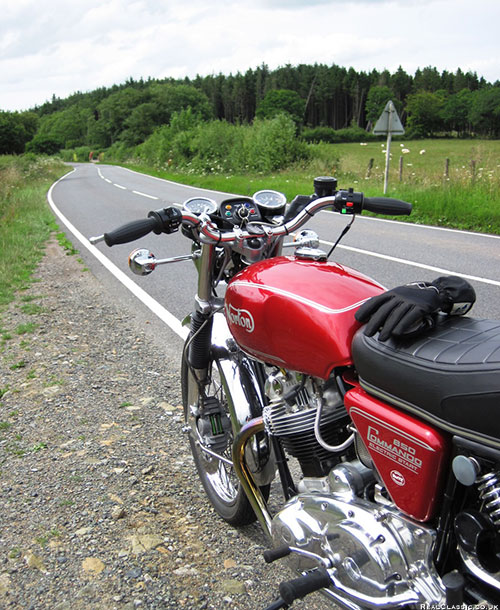