Life is packed with famous last words. Also aphorisms, epithets and acronyms, all of which are the stuff of editorial nightmares; less of a concern if you are a higher being – not an editor, in other words. I am, confusingly, an editor. My life is redolent with clichÃ©…

But the notion that a little knowledge can be dangerous? I’ll go with that. Where were we? Oh yes; we were stood on the magazine’s stand at a recent autojumble, and a man was being outraged at me:

‘We’ve got a problem.’ Plainly. The problem is that he was angry and was aiming that anger at me. ‘I wrote to you.’ My eyebrows, unbidden, drift towards my hairline, which at once recedes with renewed vigour.

‘Oh.’ Some folk prefer to rant rather than to share a conversation. That’s fine by me.

‘You did not reply.’ This is factually inaccurate, so I correct him. Gently, as a chap should when dealing with someone who has already announced that they have a problem.

‘I did in fact reply to you. Twice. The first time my email was returned, so I re-sent it. The second time it did not return so I assumed that it arrived. I can do no more.’

He was unamused. ‘I wrote you a proper letter!’ He was starting to speak in exclamation marks; always a tiny worry. ‘You did not print it! Why not?’

I explained as gently as my increasing death-wish would allow that his letter was both offensive and factually inaccurate, and that although I might have derived some transitory and pathetic satisfaction from revealing him to be an utter chump and confirming my legendary status as a chap who has more than a little knowledge (although none of it is exactly useful), I decided to spare him the public ridicule and opprobrium which would certainly have descended into his bleak life had I printed his letter.

He was unmollified. I encounter a thankfully small number of folk like this, but they are consistently unmollifiable. It’s a puzzle.

‘We have a problem!’ The exclamation marks were back. His face was growing red. Other readers and the Better Third were moving slowly away to a more tranquil part of the stand. I considered an outburst of vile temper and abusive language. Instead of this undignified retaliation, I corrected him again.

‘You have a problem. I do not.’ Rage was setting in. It is always fascinating to observe.

I made one final attempt at reason. Norton say in their 1948 catalogue that the ‘Model E.S.2 machine is to the same specification as the Model 18, with the exception that it is fitted with the NORTON Spring Frame’ (the quote marks are to reveal that this is an exact quote from that very catalogue), and careful study of the 1948 Norton Parts List reveals that all the engine part numbers are the same between the two models. You are permitted to be admiring and incredulous at how I spend my free time. I have a large collection of motorcycle catalogues and I find that reading aloud from them relaxes me after I have been compelled to deal with insane people. 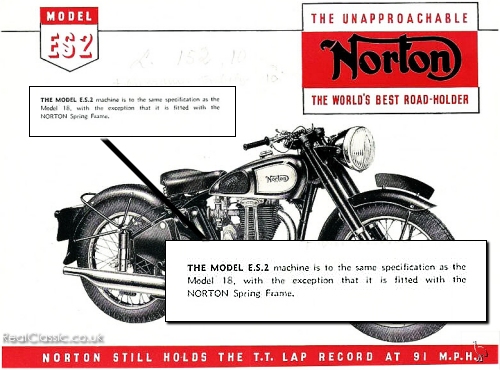 But no! They are wrong! Mr Outraged knew, for example, that the con rods are different lengths. They’re not. How can they be? Sometimes I almost feel respect for politicians. My final valiant attempt, a suggestion that it is surely possible that the guys working at Norton Motors in 1948 would know what they were building at the time and that his memory may have waned in the last half-century or so provoked nothing but fury.

‘So you refuse to print my letter?’ I agreed that this was true, not least because he was starting to dig his way well into my nasal cavity by now. And so, gentle reader, he stormed off. Peace and tranquillity returned and an entirely different man presented me with a large and impressively gift-wrapped bottle of an Irish distillation called, oddly, Bushmills. I was bemused. It was way past Christmas and… why?

‘Because you wrote that ‘whisky’ should be spelled without an ‘e’! And I disagree.’ We roared with laughter. I attempted to explain to him about the identical engines fitted to the 1948 Norton singles. He looked at me as though I had just landed from the planet Tharg. ‘Who cares? You need a drink,’ he announced, and being the knowledgeable gentleman that I am, I could not argue…