What are journalists for? Should they always tell it as it is? Or as they see it? Frank Westworth fears a breakdown but Sandra Saves The Day…

Did you enjoy last year’s great big Stafford Show? Me too. It appears to be part of our UK national character to concentrate on grumbling, so it is always a refreshing delight to meet hordes of happy folk ambling around the world’s biggest old bike bash. This despite the online drizzling from those who feel a mysterious need to announce to the world that they hate it and will never go again.

Why do they think that anyone should care? I don’t, and I’m certain that you don’t either, so why make a fuss? Why don’t they simply be quiet and go away and leave us all alone while they do something else? You have probably observed all those allegedly humorous T-shirts with ‘Keep Calm & Carry On’ in large letters on the front? We should get some printed which suggest ‘Shut Up & Go Away’. Can’t fail. Should sell thousands…

So why do folk – folk who might otherwise sensibly ignore such posturing – take notice of the things journalists write? You may stamp your foot angrily at this point and shout that you never take a printed word seriously, and that may indeed be true. But others do. The things journalists say can have massive effects. Not all of them desirable. Do you remember Hesketh?

Hesketh built several motorcycles in the 1980s. They were big and noisy and impressive and they were expensive. They built in a few Unique Selling Points (as marketing men call them) which should have guaranteed their success. They failed. Today’s roads are awash with BMWs, Hondas and Triumphs. Not Heskeths.

One reason for this sad state is that the supposed gentlemen of the Press panned them. In particular, they panned the gearboxes. And they panned the general mechanical clatter. I have ridden several Heskeths. Such is the weary lot of the motorcycle journalist. Their gearboxes are no worse than most BMW twins, and are better than most Moto Guzzis. They clatter less than all Ducatis of their day. Or even most modern Ducatis. Had I wanted a Hesketh, which I did not, I would have been impressed by their superb finish, their long-legged performance, their remarkable styling and their rapidity. The only single item which would have seriously dimmed my ardour would have been the sidestand, aka the suicidestand, which was truly wobbly. But heck … I could have fixed that myself.

Back to the Stafford Show. It was Sunday and I’d sneaked out early to ride the 280 or so miles home. Transport was my very own almost-new Norton 961 Commando. It was running superbly. This was no surprise, because it had been delivered to the RealClassic magazine stand at the show by Norton themselves, after they’d serviced it and tweaked the CPU in some mysterious manner intended to improve the slow running. Which it had. We rattled through the lazy Sunday town centre, heading south-westwards towards the Welsh March, probably my favourite riding roads.

All ran excellently until the quiet town of Gnossall, where the engine stopped. It refused to start again, leaving me stuck with a stricken motorcycle in the middle of scenic Staffordshire nowhere. On Easter Sunday. No signal for the cell phone. I pushed the bike to a garage and desperately sought a signal. There was none. All was dark in Gnossall. That’s not true. In fact all was sunny in Gnossall. Apart from my mood.

I waved back to all those riders streaming homeward from the Stafford Show. None stopped to offer assistance because they could see the new Norton … which could not possibly have broken down. 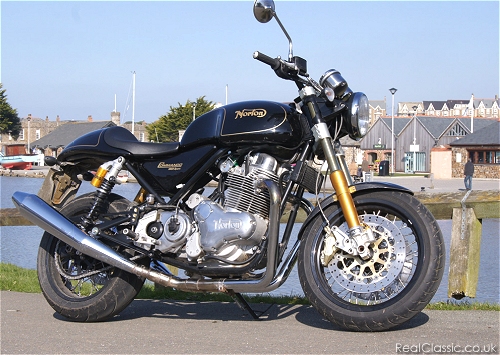 Sandra saved the day. Sandra is the nice lady in the Texaco garage who loaned me her own phone, so I could rack up her charges trying to contact the Better Half (on duty at the show), Nortons (ditto) and the always efficient AA, who arrived promptly.

AA Man flailed about with electrical wossnames of mysterious purpose. They which made no difference. ‘I reckon it’s the crank sensor. They fail a lot.’

‘On Nortons?’ I asked, incredulous.

‘On everything.’ Fair enough.

Commando on the trailer to Norton, who duly called me the next working morning to confirm that the crank sensor had indeed failed and to ask where and when I would like them to deliver the bike.

So. Here, at long last, comes the point. I could write here and scream and rant about how the famous new Norton had fallen at the first and let me down after only 513 miles. I could rave and shout about how rubbish it is. Pressmen being what they are, several others, who don’t actually own 961 Commandos but mysteriously do know all about owning them, would chime in. We could very easily ‘do a Hesketh’ on them. Because although weary experience reveals that we typically ignore it when we read great things about a bike, we never ignore it when we read something damning.

The ethers and the letters pages would fill with outraged commentary about how the bikes are rubbish, how Norton should somehow miraculously know in advance when a 50p components is going to fail and so on.

Or we could reveal that a sensor failed. Nortons Motorcycles called the RAC on my behalf (there was some comedy confusion because I couldn’t receive their calls due to my lack of cell signal) and sorted the bike out in under five minutes. They did everything. Bike fixed, bike fine. And that is surely what you would prefer to read. Well? Isn’t it?