Twenty years ago, Goat Maison set off on his 1958 600cc twin to ride halfway around the world. In the previous episode, we’d left him in Iran…

After an unpleasant encounter with a big crowd in Qom, I headed out of town and then stopped for a coke. There were some young soldiers there (who insisted on paying for my coke) who were comparing battle scars. The war with Iraq was in mid-flight and a lot of them were being killed.

Later that day, the road surface changed under my wheels and I hit the deck hard. The front lamp was smashed and my knee took the fall. A truck stopped to help and I was on my way. The knee became stiff and painful. It was my kickstart knee…

Fuel was not always easy to come by and there was a fuel stop every 200km in the desert with a long queue of cars waiting for the next tanker delivery. The fuel supply was being interrupted by the war with Iraq, but when I showed up, I’d be ushered to the front and anyone with a spare litre would just bring it to me and tip it into my tank. I was probably the only one who didn’t have to queue for fuel. Before setting off, they’d phone the next filling station to make sure that there was fuel for me.

In the south of Iran, they were building a road as fast as they could. The route through Kabul was closed due to the Russian invasion so the old track through Baluchistan had become the new main route. I had trouble leaving a town one day because I couldn’t find the road. It was then that I realised that there was no more road and that I’d be riding on the desert track from then on. This was corrugated, hard-baked sand which could be ridden slowly or fast — but not in-between.

I fell off many times and would sometimes fall off every few minutes when the sand became soft. This is one of the hottest places on earth in August and I was wearing a black Belstaff jacket, sheepskin lined leather boots and gloves, and a black helmet. If you take your gloves off, your hands cook and if you take the rest off, you lose too much moisture. Completely out of water one day, I ran into an army patrol who offered the usual red carpet hospitality.

I finally arrived at the Pakistan border which is a few mud buildings in the desert with a high fence that stretches for a few meters either side of a gate. The words ‘s**t’ and ‘hole’ come to mind. My first taste of Pakistan was from a very creepy immigration officer who wanted to interview all foreigners about ‘sexual positions’.

The toilet was quite typically ‘desert’ and was a three-sided mud wall structure with nothing inside but other people’s poo turning to dust. You do your business and stick the paper in the fresh poo. The swirling wind then picks up the paper and sends it spiralling around your head until it reached the top of the wall and disappears in to the desert! On the subject of bodily functions, having a pee when riding was best done on the bike and pointing to one side (wind depending) because there is no firm ground in the desert to use the bike stand.

When sleeping in the desert, I’d wake up with sand in my mouth and ears. My Belstaff pockets would be full of sand too, but the vastness of the silence and the vista of the stars at night are unforgettable. The peace and cleanliness that some desert veterans speak of are found here in quantity.

The Bartholomew map shows a thick red line going through Baluchistan. On a British map this would represent an A-road, but this was not even a C-road. Maybe it’s a Z-road because there was no road. There were many tracks that could have been ‘the road’. Keeping a sane head is the only way to keep you in the right direction and panic is always a slip of the brain away. To lose your way here is likely to be your last act. Sometimes there was no sign of any other vehicles and I’d start to think that I had strayed in the wrong direction, and then I’d see on the horizon a dust trail thrown up by a distant truck and adjust my trajectory a little. 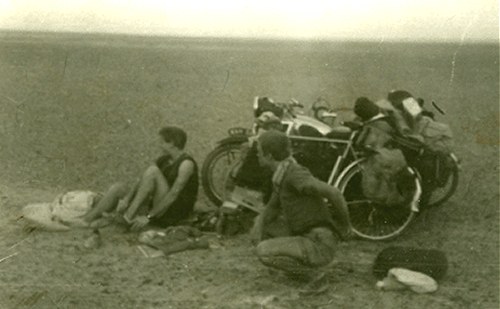 My ‘planning and preparation’ had not extended to more than a litre of water or any spare fuel, so some Iranians had given me a plastic jerry can full of fuel. When I was getting low on fuel I stopped to fill up, but the plastic had split and was just waving in the breeze. In these situations (and there have been many) somebody of the ‘bacon saving’ type often just turns up out of the blue (or they have done so far which is how I’m still here). There was a small group of tents and I rode towards them. The group chief was easy to spot. They always are in this part of the world not just because they dress more regally but because they hold a certain posture that singles them out.

I pointed at the tank and asked ‘benzene?’ He clicked his fingers and a young boy ran off to return with a ceramic jar of benzene. They asked a fair price for the fuel and I was on my way. This happened twice that day. The desert was actually full of people in some areas although you couldn’t see them most of the time. These people were mostly Afghan refugees or nomads. The ‘road’ had been bombed by the Russians on occasion and the area was known as bandit country. I never knew if the people who stopped me were bandits or not because they looked so surprised to see me (in my Biggles outfit) that they offered me water and cigarettes and forgot to rob me.

And in the final episode: how a spaceship came a cropper in the desert…