Back in 1984, aged 22, Goat Maison set out on a Great Adventure aboard a Norton Dominator. In the first chapter he discovered the M25, then the English Channel, and then Greece…

Finding a campsite became an important task each day as the sun was fading and one day, for some reason, I found myself completely off the beaten track heading up a mountain track. By the time I had got down again, it was very late. Throughout the day, I’d noticed that a tappet had become noisy and had tightened it twice. Now it was chattering again so I got out the torch (planning and preparation) — and it fell into pieces.

In the darkness, I somehow managed to fumble in my way into the pushrod inspection cover. The pushrod cap was wobbly like a loose tooth. The alloy rod had become soft and the cap was going to fall off sooner or later. After midnight I found a campsite and fell into the sleeping bag quite exhausted.

After a couple of days relaxing, I had the spanners out and saw that the pushrod needed replacing, so walked to the railway station a couple of miles down a country lane to board a train to Thessalonica. After walking around for a couple of hours, I found an old man with a shop full of bike parts which looked a lot like British ex-WD stock. Everything in the shop was rusty and dusty and he had a couple of rusty, dusty Triumph flat-tankers outside in the alleyway. How I found this shop by walking around is a mystery.

He spoke no English but understood the problem. With a piece of steel rod (probably from a tractor part), he led me through the streets to an engineer who turned the rod to the same dimensions as the one from the Norton and I had a new part. So long as I wasn’t going to rev too high, this would do. 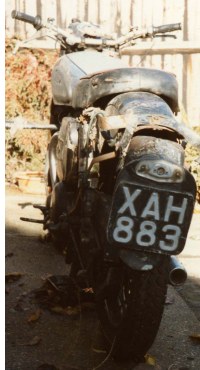 Half way through Turkey there is an invisible line. One minute you’re on the outer fringes of the Western world and the next moment, you’re over the Sivas Pass and into a much wilder place. There were lots of impoverished, suspicious, stone throwing Kurds, packs of wild dogs and multicoloured mountains. Anything could happen here. There were no campsites and I used small hotels and became acquainted with bed bugs for the first time.

In the far Eastern end of Turkey at Dogubayazit, terror started to infest my imagination with images of what was waiting for me in Iran. The risk of torture, beatings and prison life were all on the menu for an infidel such as myself. Iran was declaring war with the West on a regular basis and, to make matters worse, I didn’t have a customs carnet to legally take the bike through.

One morning after a final cup of Turkish tea, I set off past Mount Ararat and the resting place of Noah’s Ark towards the Iranian border in what might be my last hours of freedom.

There was a long line of trucks queued up at the border, and I was lucky enough to meet an official to whom everyone bowed, and whose English was very good. He asked me to write a letter promising not to sell the Norton in Iran and said that he could issue me the correct paperwork! It was lunchtime and I had still not been tortured. After going through several offices I finally had a complete set of papers and stamps, so I rode past the final checkpoint and into the setting sun still a free man.

I couldn’t believe my luck until I ran into an army patrol. They wanted a ‘souvenir’ from my baggage, but then one of them smiled and said; ‘Harley Davidson?’

‘Yes’ I said, and they sent me on my way unmolested (Norton 77 actually!).

Iran is a friendly place, where people offer travellers hospitality whenever the chance comes. I was often bought food and taken to meet relatives.

One day, I was having trouble finding a hotel and the owner of a car showroom beckoned me into the showroom where I was promptly refreshed with cups of tea and bowls of coconut ice cream. He handed me the phone and said that it was for me! On the other end was his daughter in Tehran who spoke good English and asked if there was anything they could do to assist. I told her about the hotel problem and that I’d like to be able to store the bike somewhere overnight. From that moment, the hotel that was ‘full’ suddenly had a free room and I could leave the bike in the showroom overnight.

Qom is the Islamic heartland of Shia Iran and was the only place that I was not welcome. Having pulled up outside a hotel and taken off my gloves and helmet, there was a very large crowd around the bike. I was used to crowds, but these were different. The air was tense and hostile. The hotel owner stood in the doorway and shook his head.

I put on my helmet and gloves and knew that I needed to get out as soon as possible. As I fired up the engine, the crowd didn’t part as crowds usually did, they just stared. Clutch in, first gear, clutch slightly out — they reluctantly parted as I inched through them. I thought that at any time, if someone had shouted anything riotous, that there’d be a cosh around the back of the head and that it’d be all over. I got clear as quickly as I could. 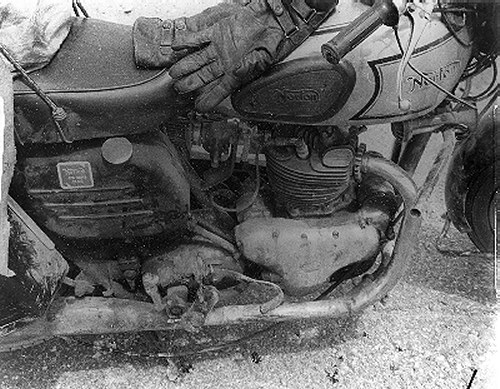