Chapter Three of Jim Algar’s Dominator Diary, wherein the engine gets torn down, and the news is… not good. So let’s take the gearbox apart, shall we?

With the engine and gearbox on the workbench at the end of Chapter 2, the next step was to tear the engine down to its component parts in preparation for sending the crankcase halves off to Norvil for the repair of the cracks around the drive-side oil seal area. Pulling the timing cover revealed a wondrously complex arrangement of gears, sprockets and chains, looking for all the world like something out of my childhood Erector Set. The crankshaft pinion drives the oil pump and a half-speed gear that carries a double chain sprocket; the front chain drives the camshaft (and the dynamo) while the rear chain does magneto duty. All that ironmongery came off rather easily, as did the notoriously difficult crank pinion gear, once threatened (‘Show him the instruments of torture!’) with the necessary (and notoriously expensive) special Norton tool, in my case on loan from a very generous fellow US member of the Norton Owners Club (www.noc.co.uk). Thanks, Steve!

It was after the pinion gear came off that everything began to go decidedly pear-shaped. At this point in the disassembly, one should be able to admire the wonderfully regular circular hole where the timing end of the crankshaft exits the crankcase. So why is mine not circular? (I did say pear-shaped, didn’t I?). Why is there a thumbnail chunk of metal missing from this fine creation of Birmingham Aluminum Castings (1903) LTD, Smethwick 40, Staffs?

And where has it gone? It didn’t go pitter-patter-clink onto my garage floor when I removed the timing case, which suggests it was disposed of and the damage ignored during the tenure of some previous owner (the rotter!).

And wait (as they say), there’s more. 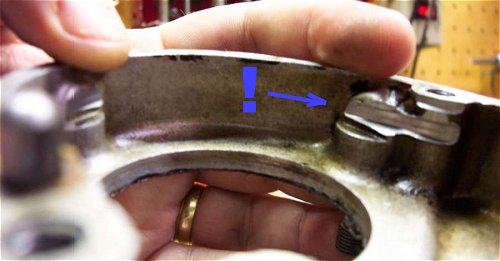 On the inner edge of the timing cover, around the magneto mounting area, there are unmistakable signs of the magneto chain having done a fair job of metal grinding at some point in the past. Are these two phenomena related? Hard to see how, but nevertheless it’s just more things to consider as I ponder the fate of my crankcase. Well, this sounds like a job for Les Emery again. I grabbed my digital camera, made several pictures of the damaged areas, and have sent them off with a letter to Les to get his opinion (www.norvilmotorcycle.co.uk). In the meanwhile, the crankcase halves shall sit in my garage, waiting.

Shall I sit idly by awaiting Les’s expert verdict? I shall not. It’s time to tear into my gearbox! As mentioned in the previous chapter, there is no visual or operational reason for doing so, other than my desire to become intimately acquainted with my bike from stem to stern.

My Dommi left Bracebridge Street in February of 1956, which makes is one of the last Dommis with the original Norton ‘laid-down’ gearbox, as AMC rationalised its line up in May of that year with the ‘corporate’ AMC gearbox, which was shared between Norton, Matchless and AJS. As Frank W pointed out in his Dominator 77 article in issue #1 of RealClassic, the AMC gearbox has gotten a reputation for being clunky and stubborn in operation, which is actually all down to clutch adjustment. In my humble opinion, the original Norton box and clutch were superior in this department. The pressure plate is lifted by a large, circular, mushroom-shaped foot on the end of the actuating rod, which guarantees that the plate will lift cleanly and squarely. In fact, it can’t do otherwise. In the AMC box, the foot disappeared, and the thin end of the rod simply pushed against the adjusting nut in the center of the pressure plate. Trying to keep the lifting action square is down to adjusting and balancing the three clutch springs. Picture trying to balance a dinner plate on the end of a pencil. Difficult and fiddly, at best. 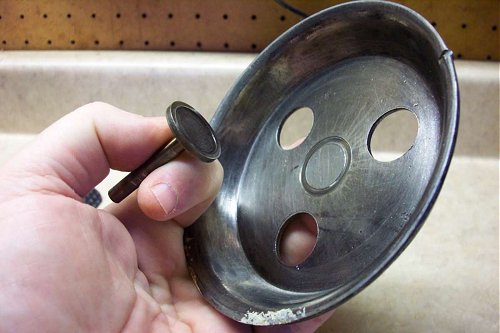 Oh, and why ‘laid-down’? Anoraks on, class. The gearbox had served Norton well since the pre-war years on its single-cylinder models. The shifting end of the box was rather vertical in aspect, with the gear-selection shaft above the kick-starter shaft. This was fine on the singles, but when this box was mounted to the early Dominator twins, the larger engine meant the box was further back in the frame, which would have required a very long gear lever , pointed down and forward, to get it properly positioned for the rider’s toe. So the end of the box was simply rotated 90 degrees forward (laid down, get it?) to provide a much shorter gear lever. 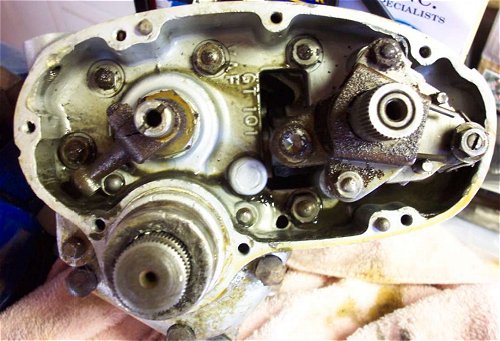 So let’s grab a spanner, shall we? But first, a basic truth: gearboxes scare us. Whereas our bikes’ engines may hold no mysteries for us, gearboxes seem, in their perceived complexity, to be beyond the capabilities of the average Joe. I mean, just take a look inside! There are gears that are fixed to their shafts, gears that spin on their shafts, gears that slide to and fro on their shafts but don’t spin on them, all manipulated and controlled by a Rube Goldberg affair of camplates, shifting fingers, balls, selectors, springs, ratchets, detents and other assorted gizmos.

Still, with the manual at hand, featuring a good, clear exploded drawing of all the whiz-bang bits and pieces, I can begin. (Not the Haynes manual in this case, however, since it starts with the 1957 models and AMC gearbox. But that’s all right; I’ve got reprints of manuals for both the singles and the early Model 7 Dommi; same gearbox as mine.) I had disassembled the clutch earlier, and aside from one warped steel plate (already replaced) it’s in good shape. Taking a gearbox apart, I discover, is fairly simple and straightforward, as long as care is taken to prevent any of the tinier bits of mechanism from going ‘sproingggg!’ and launching themselves to the nether reaches of the garage.

I find that the gearbox is, as I assumed, in pretty good shape. There’s some sort of mung, the colour and consistency of coffee grounds, that seems to have an affinity for the steel parts (but not the aluminum ones) inside the cover, and the mainshaft bearing in the outer cover turns with a feeling more akin to crushed walnut shells than smooth steel balls – that’ll be a replacement, then.

So this seems a good spot to take a break. I’ve got a bike that’s essentially in bits, my crankcase query is winging its way over the Atlantic to Les at Norvil… time to put the feet up, open a cold beer, and ponder the meaning of life. Stay tuned.