Chapter Two of Jim Algar’s Dominator Diary, wherein the classic Norton twin gets naked (small children to leave the room, please), and the cylinder head gets the better of him. Twice…

At the end of Chapter One, Black Bart was about to tie Polly Pristine to the railroad tracks…oh, sorry, wrong story.

At the end of Chapter One, I had decided that the Dommi’s cracked crankcase would go to Norvil Motocycles for repair. I had considered, briefly, looking for a set of used cases, but decided, mostly on the grounds of maintaining originality, to go the repair route instead. Well, the engine is out and sitting on my workbench, ready to be stripped… sounds easy, right? Well, maybe for you. For me…

I could have done the minimum teardown necessary to get the engine out of the frame, of course, but decided, on a whim (dangerous things, whims) to go the whole hog and take the bike completely apart, although it certainly doesn’t need that level of attention. I fully expect that most of what I disassembled will prove to be perfectly serviceable, and that I will just be re-assembling it. For example, I fully intend to do a complete disassembly of the gearbox while it’s out of the bike. Why, you ask? Did the seller mention something that has me concerned? No. Did my (very brief) test ride reveal a problem? No. Has a subsequent visual inspection turned up something worrisome? Nope. So why take my gearbox apart?

Because I want to. When I was a lad, I found that the quickest and best (though sometimes most dramatic) way to learn how anything worked was to take it apart… and then put it back together. As I got older, my success rate at the process improved, and now I routinely tear into anything that has roused the least bit of curiosity in me to see what goes on inside. So that’s what the Dommi is going to get, stem to stern. Wasted effort? Not on your tintype, pardner (oops, slipped into Black Bart mode there). It will mean that I will know my bike from front to back – down to the level of every nut and bolt.

It will also mean that I will be purposefully creating the one thing I said I didn’t want to be starting with – a basket case. But it will be my basket case, which is an altogether different thing. And it will hopefully be a well-organised basket case (more on that in a bit). So let us begin, shall we? 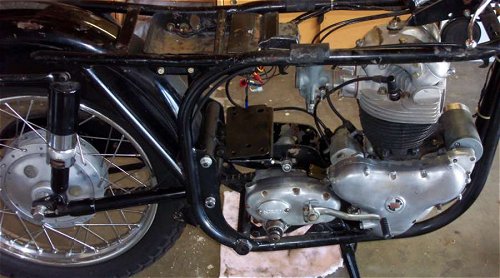 Understand that I have never stripped a bike down to its component parts and pieces before. Oh, I’ve fiddled with bikes all my life in a maintenance and remove-and-replace sort of vein, but nothing this involved. Still, I am nothing if not courageous (read foolhardy if you prefer) when it comes to things mechanical – is not ignorance bliss? – so I took spanner in hand and advanced upon my Dommi as it sat cringing on the floor of my garage.

It’s amazing how quickly a bike begins to look naked once you start pulling off big chunks of it. Take away the seat and lift off the gas tank and all of a sudden you’re looking at all sorts of bits and pieces formerly well hidden from view. Cables, frame tubes, wiring, gussets… it’s an instant motorcycle anatomy lesson.

The parts then get somewhat smaller – oil tank, battery box, assorted and sundry bracketry and pieces – each small task revealing more and more of what’s underneath. 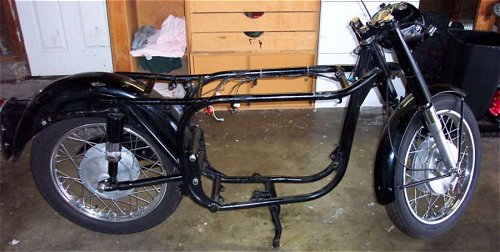 After a while, of course, all the hardware – the little bits and pieces that hold the big pieces to the bike – begin to pile up; where to put it all? You may think that you’ll remember exactly where all those different-sized bolts go back in, what kind of washers they had, and whether that threaded hole is supposed to take a bolt or a stud – after all, you’re going to put it back together this coming weekend, aren’t you? And then, of course, you find yourself back in the shed six weeks down the road, trying to remember what pieces out of the jumbled, greasy pile go just where.

You can also write little notes to yourself on the bag. Does your carburetor needle have six grooves in it? Next year, will you remember which groove the clip was in? ‘Clip came out of middle groove’, written on the outside of the bag of carburetor pieces, will prove a big help come rebuild time.

Bigger parts I try not to just throw into a pile in the corner of the garage, lest the neighborhood kids decide to use my gas tank as a football. Cheap shelving from my local DIY works well.

So, I’m cruising along, happy as can be, merrily stripping off large chunks of motorcycle, and ready at last to attack the engine. (Perhaps an unfortunate choice of words there). The cylinder head has to come off first, after which the engine and transmission, bolted to mounting plates, can be lifted out of the frame as a unit. So, let me refer to the manual: ‘The cylinder head is retained by a total of five bolts and five nuts. Slacken and remove nine of them…’ All right, I think, as I stop reading and pick up my spanner, ‘slacken and remove nine of them…’

So nine quick bits of spanner work and the cylinder head should lift right off.

Have the more observant among you just noticed the very elementary mathematical mistake I made? And it’s not even long division, just plain addition.

If I had finished reading the above sentence, where it says ‘…leaving only the front centre bolt in position,’ I wouldn’t have spent a fruitless hour with a hammer and wooden block, trying to persuade the head to come off because I just knew (hah!) that I’d gotten all of the necessary nuts / bolts. Imagine how sheepish I felt when I suddenly remembered that five plus five equals ten, not nine. I could blame Norton for hiding that centre bolt in a deep, dark tunnel in the cylinder head, but I’m not going to; this episode is down to me, lock, stock and overlooked bolt. Live and learn. 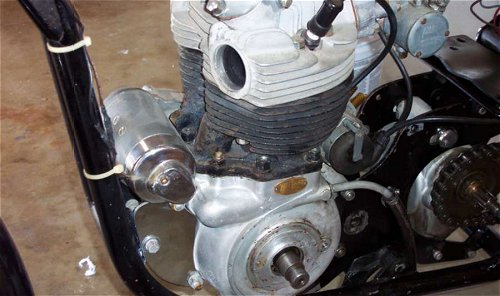 Except that even after removing the centre bolt, the cylinder head was not finished with its lessons. Taking the cylinder head off is recommended as a two-person, four-handed job. The reason is that as the head is lifted off the cylinder block, the pushrods have to be pulled up into the head past the rocker arms, out of harm’s way, and held up there as the head is turned and angled and fiddled out between the upper frame rails. But as I was by myself at the time, and anxious to get on with it, I thought I could manage it. And I just about had it out, too, when suddenly the greasy head spit itself out of my hands and headed for the cold, hard concrete floor of my garage.

A philosophical aside: why is it that when a disaster occurs over which you have absolutely no control, time obligingly slows down so that you are treated to a lovely, slow-motion view of every heart-wrenching step of the developing calamity? There I was, hunched over and inextricably tangled in the frame rails, powerless to do anything but watch as the cylinder head slowly finished its perfect swan dive onto the concrete, landing with a sick-making CLANG! on the floor. 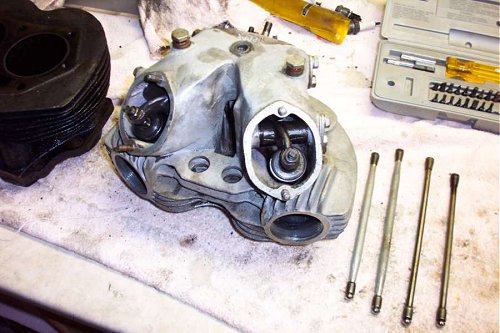 Great, I thought. That’s got to be a broken fin or two, at the very least. I picked up the head, and to my relief found no apparent damage. But just as I was putting it up on the workbench, my attention was caught by one of the three studs that protrude from the bottom surface of the head. This stud had, it appeared, suddenly decided to eschew the vertical and assume a new, somewhat more nonchalant posture. Sure enough, a close examination of the tip of the stud revealed the smashed threads where it had taken the brunt of the impact with the garage floor, bending in the process. Well, I thought, I should consider myself lucky. A new stud is a £3 part, whereas a broken fin is… well, it doesn’t bear thinking about. Lesson learned; when the manual suggests you recruit a helping hand for a task, there just might be a reason. 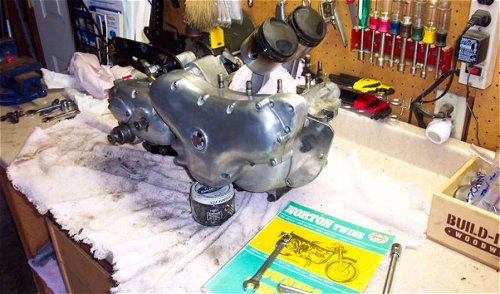 After that, things got a little easier. The cylinder block came off without a fuss. (It’s held on by nine nuts. Nine. I counted them. Carefully. Then I read the manual again. Nine). 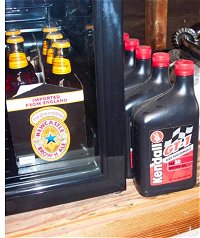 With the help of my son, Geoff, the engine / gearbox assembly was carefully lifted out of the frame and placed reverently on the work bench. (15-year-old Geoff, by the way, has yet to show any interest at all in any mode of transport with less than four wheels. Where have I gone wrong?)

So after a pleasant weekend of work and a boneheaded mistake or two, here endeth Chapter Two. Next shall be the total stripdown of the engine in preparation for shipping the emptied crankcase off to Norvil. Stay tuned.