We can’t all be expert spannermen. Howard H reminds us what it’s like to be fixing up a classic bike with little mechanical skill (and even less time)…

Have you ever had one of those days in the shed where everything you do goes just right? No, me neither, though I suspect Humbernut might be familiar with such days. I always think carefully about any job I tackle, but usually only after I’ve already finished it. Having little spare time at the moment, I always seem to be in a rush — and that’s when things go wrong.

Removing the cylinder head from my Norton Big 4 wasn’t part of the Big Plan. But I had to, as you will see. The gearbox and clutch had been dismantled and rebuilt, partly because everything involved with these assemblies seemed to be only loosely assembled (apart from the engine nuts, bolts and screws almost everything on the bike seemed to be loose), and partly because gear selection was a bit iffy (ie; ‘where’s fourth gear gone?’).

Well, I didn’t find the expected carnage in there; in fact all was in extremely good condition despite the water lying in the bottom of the box. So everything was carefully reassembled (in the reverse order to disassembly of course) and the gear selection re-tried. Hmmm, well we now have four gears, although there is some stiffness — just have to wait and see how it goes on the road.

But… what was that loud sucking noise when I turned the engine over to aid gear selection? And where’s the piece of paper gone which was stuffed in the (carburettor-less) inlet tract?

And that’s why I had to take the cylinder head off. Oh well, I suppose it can have a decoke.

At this point it was noted that the plus-20-thou barrel was in good condition. In fact it joined the list of parts in good condition. For example, there are NO slots worn in the clutch drum grooves – unbelievable, I have never come across this on an old Brit bike before.

Having cleaned the oil tank thoroughly and having fitted new rubber oil pipes and clamps, new oil was poured in. Great, another job done. A couple of days later, however, the bike was moved to one side to begin replacing the old, rotten wiring, which looked like it had served as house wiring in a former life. 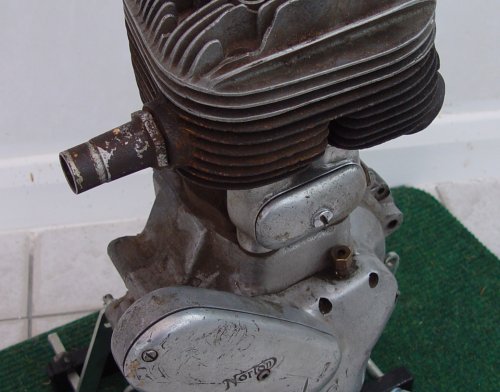 So why is there a big puddle of oil on the floor of my newly-built shed (and that’s a story in itself!) then? Ah! Because the soldering on the metal part of the oil pipe has given way at the pipe / flange interface. (Did that sound like I knew what I was talking about? Just a little bit?). Well I can’t fix that one, so it’s down to the local classic bike emporium to get it re-soldered.

What I could do, though, was bodge…. er, re-engineer the battery tray which I was given with the bike. This was, as the vendor admitted, off a totally different bike, and in parts half the thickness of metal was rusted away. Chemical Metal, Smoothrite, some bending, skinned knuckles, and a home-made battery strap later and it looks (and works) fine, despite being probably nothing like that fitted to any other Big 4 in existence. A rather distinctive touch is the Ozzy Osbourne keyring figure (a present from my daughter) now fixed to the battery tray. Cool or what! Unfortunately it’s not a talking figure, which would be even better. It could be used when replying to demands for speeding fines, maybe? (‘**** off, what, er, what, oh **** it’. But perhaps not: speeding on a 600cc sidevalve?)

A battery was bought cheaply mail-order and was filled with acid — WITHOUT burning myself, the cat, the dog, or any item of household furniture! A miracle, then.

So it goes on, with oil leaks appearing here and there, being fixed, and springing up elsewhere (and that’s before the thing was even started). I started it for the first time last week, as reported on the message board. It started second kick, sounds well, and I’m looking forward to getting it on the road before spring — despite the leaking fuel tap, the non-existent regulator, the drive chain that needs replacing and the hundred and one other bits and bobs that need doing.

Then we’ll see about an MoT. Wish me luck.

What’s One O’ Them Then?

You may have missed the ongoing entertainment of Howard’s happenings on the message board, so we’ll take pity on you and explain at least some of the plot. Howard is rebuilding a Norton Big 4 which, despite is name, is not particularly big and it doesn’t have four cylinders (nor is it red and there’s no rocks in it neither, but that’s beside even this point).

But if you thought it was Norton’s Model 4, and big – as in large – then you might feel a little less baffled. However, we could seriously spoil your day by muddying the waters with the snippet that the Model 4 is uncannily similar to the Model 1. Does anyone out there know the difference?

Oh yes. Sorry. Big 4. Built from 1932 to 1954. 634cc of heartily throbbing sidevalve single producing an entire 14bhp at 4500rpm. Girder forked until 1947 or thereabouts and not a sniff of a swinging arm. Pre-war ones have a lower seat (27.5-inches) but an inch less ground clearance than post-war ones (29-inches and 5.5-inches for the completists among us). As we’re talking in Imperial then you’ll need to know that the Big 4 weighed 373lb unfuelled, had 7-inch drum brakes fore and aft and could carry no less than 2.75 gallons of whatever passed for petrol under rationing.

Like many sidevalves singles, Big 4s were ridden and ridden until they could be rode no more, so you don’t see so many of them these days. And if, after reading all this, you aren’t immediately smitten with an urge to rush out and ride a Big 4 then, well, there’s plainly something not quite right in the state of Texas… 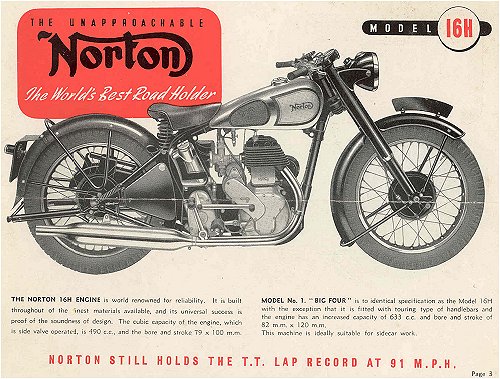