Rob Seedhouse wanted a project to keep him out of trouble for a while. It turned out to be a very long while! But if a job’s worth doing…

In 1990 I was bored with my model engineering hobby and though that if I could combine my engineering and my motorcycling then I would have the best of both worlds. I wanted a project which, when finished, I could really use. A friend offered me a Norton, cheap. Thoughts of Dominators and past ton-ups down the local ‘mad mile’ flashed through my mind — but then I came back to earth with a crash.

‘It’s a Navigator’ he said. Ah well, it would be something to pass the time. And they weren’t that bad, were they? I chased away vague memories of burned-out pistons and Wipac electrics…

So a deal was done and for £65 I became the proud (?) owner of something that resembled a motorcycle. Well, it had two wheels and what seemed to be an engine underneath all the sawdust and wood chippings. With rose-tinted glasses firmly in place, I couldn’t understand why the wife told me to park the works’ pick-up around the corner until it was dark, so that the neighbours wouldn’t think I had gone into the scrap business. When she first saw the bike, my wife definitely thought I had gone mad!

We off-loaded the Navigator down a ladder, to the musical accompaniment of metal parts falling off onto the floor, and it was quickly put behind closed garage doors.

The following day I checked over my prize purchase. The condition of the bike was such that it looked like someone had ridden it with the frame and engine mounting studs loose and the spacers missing. The result of this was a cracked frame downtube. The fork legs were topped up with water (don’t ask me how it had got in there; perhaps the missing oil seals is the clue). The front mudguard was wrong, the rear had suffered badly in its life. The sidepanels and seat were missing but the toolbox and oil tank were still there. The tank was dented and the previous owner had brazed up a split.

What else? Oh yes, the rear number plate was wrong, the headlamp was bent, and the speedo didn’t work. I’ll get to the engine later! On the positive side, the frame and engine numbers matched and there were the remains of its original registration number. Perhaps I could retrieve that?

Was I disillusioned? Well, no. I wasn’t. I just saw it as a challenge. Strange, that!

The first thing I did was to join the Norton Owners’ Club and send for any information about the machine they might have had. The bike is a 1962 model, registered in 1963. It was in 1963 colours of metallic blue and black, with remnants of chrome on the rear mudguard (chrome guards were an option). I found the original 1962 colours of blue and grey when stripping the frame and toolbox. I, and others in the club, believe that the bike may have been updated to the new colour scheme for 1963 before sale to improve its appearance, but it would have still retained the 1962-style silencers.

I decided to rebuild the bike in 1963 colours and try to get it as original as possible — but then I also decided to incorporate improvements as needed. I just couldn’t resist adding some personal embellishments along the way!

Before starting the stripdown I took photos at different angles with some close-ups of a number of items. Parts books and owners’ manuals were obtained, together with Roy Bacon’s book on restoring Norton Twins. I also grabbed as many contemporary photos and sales adverts as I could find. Because of the way the bolt-up frame wraps itself around the engine, I opted to assemble the frame around the bottom half of the engine and then fit the forks and wheels, and then all the other parts. 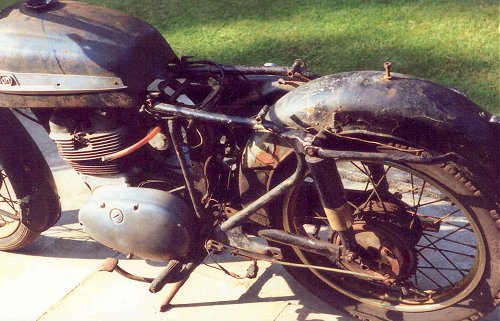 Then, to work! The frame was stripped, the down-tube reinforced and repaired by a coded welder, and the whole powder-coated and reassembled with new stainless studs and spacers. The swinging arm bushes checked out OK. The forks were rebuilt with hard chrome stanchions and new bushes and seals. New lower forks legs were sourced locally to replace the totally worn out old ones — what a price! The springs had to be re-used as I couldn’t find the correct ones at the time.

Likewise, I couldn’t find any decent cup-and-cone bearings for the steering head so I cut one up, made a drawing, checked the heat treatment process that the originals had been given and made my own. They were then taken to a contract heat treatment company and nitrided to provide a good, hard, thin case depth. With new ball bearings the result worked fine.

Fork tinware was re-used where possible but the lower shrouds were beyond repair. Genuine handlebars were obtained from Terry Brock (Norton lightweight owner and guru) and re-chromed. Terry also provided a number of other items as well as advice — thanks!

The rear suspension units were checked out and they still had good damping action with no leaks, and the springs were still the right length — that was a surprise! These were cleaned up, re-painted, re-bushed and new chrome shrouds fitted. Central Wheels rebuilt the wheels with new chrome rims and stainless spokes after I trued up the drums. I wish now that I had used stainless rims as well. New Avon tyres and tubes completed the wheels.

I sourced a replacement front guard but wasn’t able to find a rear mudguard. Several attempts were made to reclaim the original, which included getting contractors who were blasting a metal fence to remove the rust with their equipment (not recommended. OK, it removed the rust but left 20mm cannon shell holes). My wife, Margaret, eventually lost patience and sent me to the Stafford Classic Bike Show with instructions to ‘find that guard and finish the job!’ The last stall I visited had the elusive part and I returned home well pleased, clutching my trophy.

Both guards looked as if they would take chrome OK but it took two different companies to do the job right — you have to remember that this is thin metal and 40 years old. You need a company which will spend time on the preparation and produce good polishing, otherwise the chrome just reflects the marks which are left. I can thoroughly recommend Bob Cooper at Chrome Restoration Services in Stafford.

As the previous owner had done what most riders did at the time, and had thrown away the sidepanels, I had to find new ones. Luckily the NOC had just made a batch. I wish I’d known before I begun just how scarce the spares are. The club is doing a good job on improving the situation, however.

My wife found a fuel tank at Founder’s Day which was in far better condition than the original, and even came with a petrol tap and good badges, covered in buckets of Hammerite — all for £20! These were stripped and re-chromed. I put sealant into the tank as a preventative measure, and cleaned and serviced the tap. 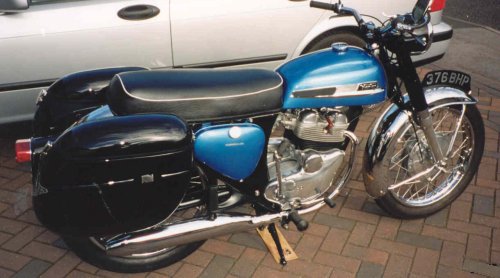 Although I have a spraygun and compressor I decided to use a professional for all the major paintwork. I wasn’t happy about spraying a metallic finish and certainly didn’t want to get involved with two-pack! Chase Accident Repairs, who were recommended by my local paint supplier, did the work at a good price. Although they concentrate on car repairs they like motorcycles and don’t mind the more fiddly work which two-wheelers entail.

The genuine seat base came from Granvilles, and was re-covered by RK Leighton in black with white piping.

Remembering the nightmares that I’ve had with motorcycle electrics in my younger days, I installed a new harness, modified to take a Boyer Powerbox and electronic ignition. Although new, one of the crimped connections fell off the harness when it was taken out of the packet, so every one — including the Wipac switch plugs — was checked and soldered into place. The original Wipac switchgear was stripped down (watch those springs; they fly everywhere!) and I soldered the brass blades to the internal brass links to cure any possible intermittent contact problems. 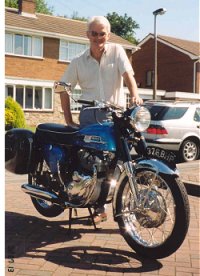 I couldn’t find a decent original ammeter so a Lucas one was fitted instead. The Navigator’s headlamp is smaller than the normal 7-inch, so a Wipac glass was found at an autojumble, and mounted on a Chinese reflector using electrical non-corrosive sealant. My wife again came to the rescue and found the correct chrome rim.

Exciting isn’t it? And I haven’t got to the engine yet!

Coming soon: the engine rebuild, reclaiming the Navigator’s original number, and getting it back on the road. All easier said than done!

Lightweight or Heavyweight Nortons. Which is best?