Ever have that sinking feeling that something is missing? In Tom Rodford’s case it was all of his Norton Lightweight’s tinware. But he persevered, and built a motorbike out of a pile of bits…

It all started in August 1996, sat in a pub at the local motor club evening. Pete and I were talking about the next classic car run when he changed the subject and said; ‘Do you know anyone who wants an old British bike?’ Well as it happened I wanted one myself! So I replied ‘As it happens… what have you got?’

Pete knew very little about the bike, only that it was a Norton and that it was in bits. So after another pint we agreed a time to have a look at it. As it was a nice evening that day, I took ‘The Boss’ along for a ride out. Arriving at Pete’s we men went straight into the garage, while the wives went into the kitchen for a chat. In the centre of the garage stood a pile of bits and boxes and, more importantly, the original logbook. The bike was a 1959 250cc Jubilee, and it had done about 14,000 miles.

Not really knowing what I was looking at, it did actually seem to be all there. A frame, two wheels, petrol tank, engine, forks, apparently everything except for a battery and silencers. ‘How much do you want for it?’ I said. ‘About £400.’ A little haggling later and we agreed on £200, and into the boot of the car it all went.

‘What do you think of it?’ asked The Boss.

‘How, exactly, can you get a motorbike in the boot of a car?’ she asked, suspicious. When I replied that it was ‘in big bits’ I landed up on the receiving end of what might be called an old-fashioned look. I suppose we’ve all had THAT look from the wife at sometime or other. It’s the ‘now I really know you’re stupid’ look. But it was too late, the deal had been done and we set off home.

Apart from the original logbook there was very little documentation about WYT 719. Where to go for information? The Norton Owners’ Club. My membership was accepted and I soon made contact with Ray Sage. He advised me that WYT was an early Deluxe model and sent me a picture of one. It was obvious that my bike was not at all complete! There were none of the rear enclosure panels or the heavy front mudguard included in my ‘kit’. More information was needed, so I bought books and manuals and — most importantly — contacted Terry Brock, the Lightweight supremo. He soon had me on my way.

One bigger problem lay in the way of the restoration of WYT, and that was a 1966 Morris Minor which I was about halfway through restoring. So for the next two years work on the bike proceeded only slowly. I built up the unrestored frame to see what was (and what was not) there. I visited autojumbles to find those elusive rear enclosures and mudguard, and purchased new parts in readiness for the restoration to begin in earnest.

The restoration proper began in January 1999. The frame was taken for powder-coating in Dove Grey (not the right code for the powder but a very close match). All new stainless frame spacers were made, a multitude of stainless fasteners bought, new steering head bearings purchased and fitted, rear shockers checked and restored, and the front forks were stripped, re-bushed and sprayed in Monaco red. Both wheel rims were sent for re-chroming, but on their return looked too pitted under the chrome so a new set of wheels were commissioned from James Wheildon. Soon a rolling chassis appeared, looking smart, standing on its new Metzeler tyres.

Now for the next step. 12-volt electrics? Electronic ignition? Yes, to both. I also purchased a new wiring harness. Why? Because the one that came with the bike was a homemade loom on which virtually every wire was coloured red! That’s a real help when trouble-shooting wiring problems, so it’s now lurking in a landfill site somewhere. I also bought a Boyer Bransden 12-volt power box and Micro Digital Ignition system (total cost £160, including an alternator), and fitted them to an alloy carrier plate which was mounted between the frame and battery carrier.

Next the rear enclosures, mudguard and petrol tank had to be sprayed. Three litres of Dove Grey (mixed to match the powdercoat sample plate) arrived, and the tinware was carefully shot-blasted to remove the multitude coasts of paint and surface rust. Other that that the panels were in remarkably good condition, and were soon fit to be sprayed. 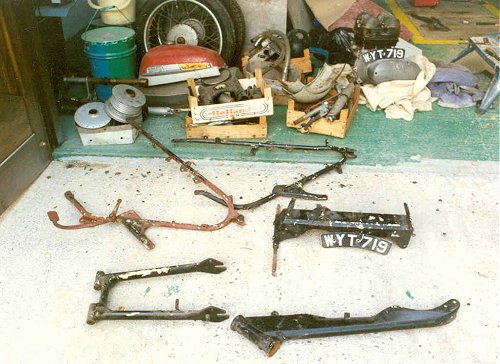 By early 2000 WYT was a complete rolling chassis and work could start on the engine and gearbox. As the barrels weren’t fitted to the crankcase, heaven only knew what was inside, so a complete stripdown had to be done. As I’m sure most of you are aware, the trickiest part of stripping any engine and gearbox is timing the use of the oven to coincide with the wife being out… Once this was achieved, the stripdown swung into top gear to ensure completion before The Boss returned!

Once the crankcase and bearings were removed, the cases and heads were sent off for chemical cleaning. They came back beautifully clean, probably better than new! The crankshaft was dealt with while the cases were away. On unscrewing the sludge trap plugs I was met with a solid mass. I wasn’t surprised that the big ends were in such a state. I don’t suppose that they’d seen any oil for the last few miles of their lives! I set about digging out the sludge traps. Once cleared, they were scrubbed out with petrol using a bottlebrush and pipe cleaners, and then the crank was sent off for re-grinding and the barrels for re-boring. For future peace of mind I opted to fit a remote oil filter kit (cost £30).

Rebuilding the crankcases proved to be straightforward (allowing for the aforesaid timing of the oven!) as did fitting pistons, barrels and heads. These needed no more work than the fitting and lapping of four new valves onto the original seats. No unleaded seats fitted yet… we’ll see how the originals perform first.

All of the gearbox components were checked for wear and seemed to be in very good condition. Therefore I didn’t bother with any major work, apart from putting a precautionary peg in the layshaft bush to prevent it from rotating. I also used the Malmsebury Mafia oil seal conversion for both the kickstart and gearchange shafts. Voila! The box was rebuilt and the engine unit was ready for fitting into the frame.

Another look at the timing initially had me thinking that everything was OK, but working through the engine cycle on the timing disc changed my mind — perhaps using the timing holes in the stator plate I was actually timing it at 64-deg bTDC and not 32-deg. So I timed it again at a point midway between the timing hole and the little coil — and she fired up a treat. I rang Terry for a second opinion and it seems that whilst I specified a stator plate to fit a Jubilee / Navigator, I had been given a stator plate for a Commando (to make it fit the Jubilee housing an adapter ring was also supplied).

The next day I rang Boyer Bransden and purchased the correct stator plate, which arrived a few days later. This was fitted and timed up using the timing holes as per the instructions and everything worked satisfactorily. (The original, wrong, stator plate was not from Boyer Bransden but from a well-known supplier who shall remain nameless. So all you Jubilee owners out there who are going to fit electronic ignition: make sure that you specify and get the Jubilee / Navigator stator plate. Be wary of using a Commando plate with an adapter ring. In my case it didn’t work properly).

By Christmas 2000, WYT had been completed. All that remained was to reclaim the original number and a new V5. With all of the required paperwork completed I was amazed at how easily this was done and thanks must go to Neville Hinton and the Bristol VRO for their help in achieving it. In Spring 2001 the Jubilee was successfully MoT’d, taxed, back on the road and looking good. We rode 1000 miles over the next year, without mechanical problems, and WYT was properly run in. Over winter I gave the Jubilee a complete service and changed the engine and gearbox oil. The clutch plates were re-lined. I also fitted a sprung loaded oil seal behind the clutch — to cure that annoying dribble — and a three-tooth smaller rear sprocket — to get a bit more speed!

So WYT has had a complete nut-and-bolt restoration. As far as costs go — well, let’s just say I’ve spent a shilling or two to do it! Despite all of the pundits and knockers, my experience has been that the bike is 100% reliable. As long as the Jubilee is serviced properly then it can give reliable service. Having said, that I suppose that using electronic ignition and a modern alternator has greatly reduced the effect of the much slated Wipac electrics! Perhaps with the modern electrics the Jubilee has a chance of losing its unenviable reputation of being a pile of junk?

I must say that the Jubilee is a bike which wouldn’t have been on the top of my Christmas present list and I have only come to own one because it was cheap, even as a basket case. However, having rebuilt it and ridden it, I have come to like it. It does 60mpg and is cheap to run. Yes, it is not fast — BUT — it is fast enough for me (almost). I find it a comfortable and good-looking bike to ride and, as a ‘born again’ motorcyclist, it has provided me with some enjoyable times and many new friends.

What more does anyone want than that? 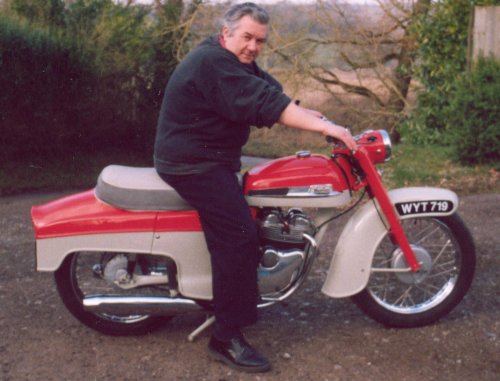