Roy Workman gets a bit nippy and meets any number of Norman cycles, and the Norman Cycle Club, and a windmill…

My interest in Norman motorcycles was rekindled when an article in the MZ club magazine mentioned a Norman Club. On enquiring about it I found out that the club started up in 2001, and that it has grown steadily to a membership of over 100, including some members of the Norman family.

My first motorcycle was a James 98cc, purchased from Precision Garage, in Gillingham, who were Velocette agents. The James was a great first bike but, living in a hilly part of Kent as I did, some of the hills were too steep for the output of the engine so something more powerful was required. The James was part-exchanged for the Norman, with an engine twice the size and with three gears instead of two. I could now ride anywhere!

Norman motorcycles were made in Ashford, Kent. The brothers Charles and Fred Norman started producing bicycles in 1921, and the business grew rapidly. A new company called Norman Cycles was formed. Norman’s started motorising their products in 1938, when they produced an autocycle, called the Motobyk, which was basically a strengthened push bike fitted with a Villiers engine. About this time they also produced their first motorcycle, a 125cc machine, again powered by Villiers.

During the war years the firm kept going. The War Office ordered a couple of hundred Motobyks, and the firm also made folding motorcycles for use by the forces, particularly the paratroopers.

After the war improvements were made to the range of motorcycles, and Villiers 150 and 197cc engines were fitted. Norman were one of the first firms to use swinging arm suspension. Fred Norman did some development work on Armstrong leading link front forks. Norman then used these forks from 1955 as they helped to improve the steering, road holding and braking. The Norman factory produced a Mark II version of these forks, when Armstrong stopped producing them, and Norman also supplied these forks to other manufacturers. 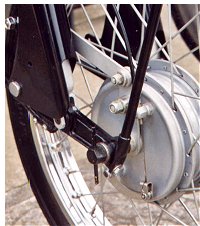 This was powered by the British Anzani engine, which gave a top speed of 60mph. This was soon replaced by a Villiers engine of the same size, which was somewhat quicker.

As well as road machines, Normans produced off-road bikes. Derek Minter, the famous road racer, used a Norman trials bike during the winter months. He used to advertise the company’s products and his photos appeared on the factory trade stand at the motorbike shows. The Norman factory had a go-ahead attitude. They entered well known trials like the Scottish Six Day Event. In 1954 their effort comprised of a team of eight riders and machines, and one of the riders was Ray Peacock.

In the 1955 Victory Cup Trial, Ray Peacock gained a first class award and finished in 17th place, one place behind Hugh Viney, who finished 16th riding his AJS. The Trial was plagued with heavy snow and frozen ground, and the original 18 sections were reduced to seven. There was a mix-up with the route marking, so some competitors did not finish until after lighting up time. Ray did well to finish 17th; he was the second two-stroke rider to finish.

In 1955 Norman were marketing nine different models, and the Norman Nippy moped was introduced a year later. This was a nice quality moped, powered by Villiers or Sachs engines.

Norman also produced two very stylish 250cc sports motorcycles, powered by Villiers; in the late 1950s these were the B3 and B4 models. The B4 was particularly smart, having an Italian style tank, dropped handlebars and a red and white colour scheme — very racy for its time, with good handling and acceleration. 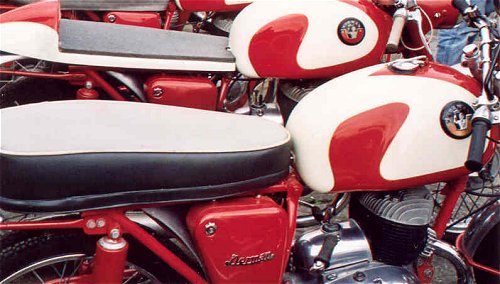 Hallets of Canterbury, a local dealer, entered a B3 sports machine in the 1959/60 Thruxton 500 mile races. The bike was more or less standard, although the engine was tuned by Villiers and it was good for 90mph. The riders were Les Hatch and John Punnet. In the 1959 race they led the 250cc class, eventually finishing second. Les’ mum was listening to the race on the radio — they were mentioned for over two hours whilst they led the class! The resulting publicity resulted in £10,000 worth of orders overnight. When you consider that the top of the range B4 sports cost £192 at the time, this shifted quite a few bikes.

At the peak of their production Norman were producing 5000 bicycles, 600 mopeds and 120 motorcycles per week.

Fred and Charles Norman decided to retire in 1961 and the factory closed down. Some Norman machines were made in Nottingham for another year by the new owners, Tubular Investments (owners of Raleigh). 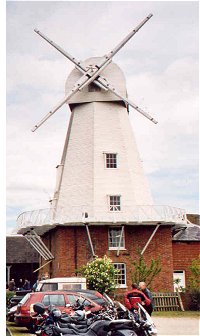 The windmill in itself is well worth a visit. It is open until the 28th Sept 2003 and then re-opens next April. Guided tours, lasting approximately 45 minutes, cost £1.50 for adults. These are very interesting and you get a good view the higher you go. The windmill is open on Saturdays, Sundays and Bank Holidays, from 2pm to 5pm. On special event days, like the forthcoming Harvest Transport Festival, on the 28th September 2003, the windmill opens at 11am.

This Transport Festival has lots to see. The Windmill Trust is looking for business (it needs to raise money to help with the restoration, particularly for a new set of sails). If any clubs fancy a different place to hold a rally then the windmill has good hard standing area and a fairly flat field available.

The Norman Cycles Club is going well for a new club. Their editor, Gary Pilcher, produces an enjoyable newsletter. The club have their own website at www.normanmotorcycles.org.uk. They have club T-shirts and sweatshirts for sale, as well as petrol tank transfers and cloth badges.

The club’s next day at the windmill is the Transport Festival Day, but please check either at the windmill or on the club’s website to confirm the date before you set out. The windmill’s phone number is 01233 661866. 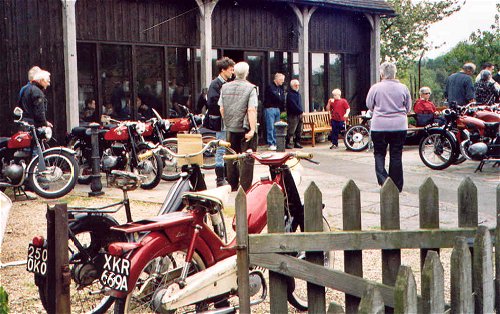