As 2008 draws to a close, here’s our last round-up of classic bike news for this year. And most of it is about what’s happening in 2009, apart from the scoop news about the latest Norton…

Break out the Kleenex before you follow this link, because you won’t know whether to laugh or cry. www.squiffles.co.uk; a ‘world first for this prestigious British brand’, apparently. Please, Great Bird of the Galaxy, make it an early April Fool’s joke. Or a bad dream. Please don’t let it be real. And if it is real, then we sooooooo TOLD YOU SO…

Meanwhile, back with proper Norton motorcycles, the Norton Owners’ Club will celebrate its 50th anniversary in 2009 and already the club has produced a handsome Golden Jubilee Calendar and a range of Golden Jubilee merchandise. (Well, all right, there’s a t-shirt so far. But it’s bound to be a full range of merchandise before long!). The highlight of the club’s celebrations will be Norton Day, to be held at Donington Park on Friday June 19th 2009. More details to follow when we know what they are or see www.nortonownersclub.co.uk

The Worcester Auto Club is also having a birthday in 2009, when the organisation will be 75 years old. As part of their celebrations, the WAC have offered all VMCC members one year’s free membership to the Worcester Auto Club. Now don’t let the name mislead you – the WAC is all about motorcycling and the club is home to well over one hundred members who make use of the club’s facilities as a base for their two-wheeled activities. The club is licensed and opens three times a week on Sundays, Tuesdays and Fridays. WAC membership normally costs £20 per year but VMCC members who can produce a current membership card will be given 12 months complimentary membership of the WAC. Jim Strefford can tell you more about it on 01905 25333 during working hours, or see worcmcc.org.uk

Triumph rocker oil feed/cooler units are now available in the USA from British Bike Connection. Made in the USA of billet alloy these are similar to the old WEBCO units but BBC say they are ‘a lot better’! Available for either 650 or 750 unit twins for $85 in American money (which still works out reasonably cheap in GB sterling despite the plummeting pound). From www.britishbikeconnection.com, phone 001 (585) 288-4546 or fax 001 (585) 288-2772 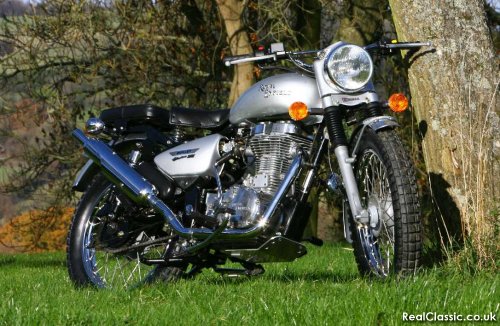 Bator International Inc have taken over the Daytona Antique and Classic Motorcycle Auction and Vintage Bike Meet, scheduled for March 4th to 7th in 2009, at its traditional venue at the Stetson University auditorium.

Head honcho Glenn Bator said that he and Jerry Wood are very happy with the transaction and are both looking forward to working together to continue this long running event. Both parties feel that this a great time in the market to invest in collectable old iron. Bator says; ‘in the past several months, we have all watched the stock market in some areas drop by 40% or more. In that same period of time, classic motorcycles have not gone down anywhere close to that percentage rate and, in some cases, have increased in value’.

Bator states that they already have a great line up of motorcycles for the March event and are still accepting consignments. This will be the first in a series of new motorcycle auctions that Bator International plans to put on throughout the US and possibly abroad. See www.batorinternational.com

British Historic Racing, which is the road race arm of the VMCC, has announced its provisional timetable for the 2009 season and the competition begins with a test day at Mallory Park on March 27th. The first race of the season then takes place on Easter Monday at that track with six other rounds following at circuits around the UK (see our events page for the full listing).

British Historic Racing enjoyed a bumper 2008 season as a rapidly increasing number of new fans discovered the thrills of watching British, European and American motorcycles from yesteryear battling ferociously at leading circuits throughout the country. Newcomers are always amazed at just how rapid the racing is, and the action comes thick and fast with typically around 20 races per day taking place. As well as being fiercely competitive BHR events also have a well earned reputation for friendliness and the club positively encourages spectators to visit the paddock where they will find riders, owners and sponsors only too happy to talk bikes. 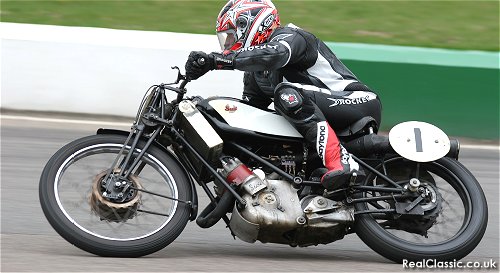 The BHR series offers a wide variety of machinery which ranges from the 1920s to the mid-70s and includes solos, sidecars, trikes and even the spectacular BSSO scooters. With methanol fuel permitted, the pace of these machines has to be seen to be believed, as has the competitive spirit among the riders. In the solo classes there’s everything from rigid frame Scotts, Rudges and Velocettes to Bantams, Manx Nortons, BSA triples and Triumph Thunderbirds and just about everything else in between, including some ex-works machines. For fans of three-wheeler racing, BHR events provide more diversity and action than any other club with three well subscribed classes that include Big Wheelers, Kneelers, Scooters and Cyclecars (like Berkeleys and Morgans and Specials) that invariably produce excitement by the ton.

The club looks forward to welcoming many new riders and fans for what promises to be a thrilling 2009 season. More info is available from bhrsecretary @ ntlworld.com

Buying via any of these links also helps to support RealClassic.co.uk: