We have no idea what a Heldun Harlequin might look like, so we’ll be going to the Ardingly Show on October 26th to find out…

Entries have now closed for the end-of-season South of England Show which is on Sunday 26th October 2008. We understand that if the weather is in the least bit kind* then both halls should be packed to bursting, with plenty of unusual and interesting machines on display. The event is always well supported by local clubs, so you can expect to see plenty of Beezers, Indians, and AJS and Matchless machines mixing with all manner of other marques. 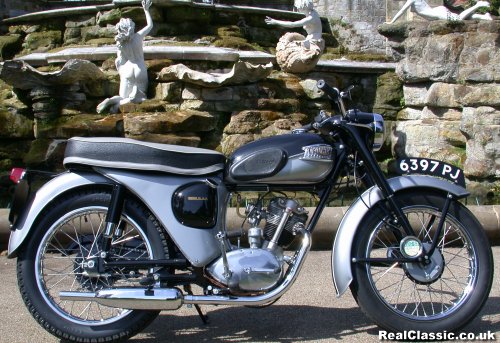 A range of more familiar classic bikes will also be on display, including quite a few which have been featured on this site and in the monthly RC magazine. Alan Goff has promised to bring his 1962 Tiger Cub, aka ‘Puddlejumper’, which has been with him since 1968 and was recently treated to a full restoration. Neil Pattemore has entered his prize-winning Triumph T120R (no more prizes for you, Neil; you’re hogging the limelight!), while Dave Hawes never lets a little thing like bad weather stand in his way, so we look forward to seeing his Laverda Jota once again.

There should also be a 1977 Kawasaki Z900 A4 on display, recently restored from the ground up using as many reconditioned and refurbished original parts as possible. It’s been painted in Z1B colours – so don’t go telling the owner that they didn’t do that paint scheme in 1977… 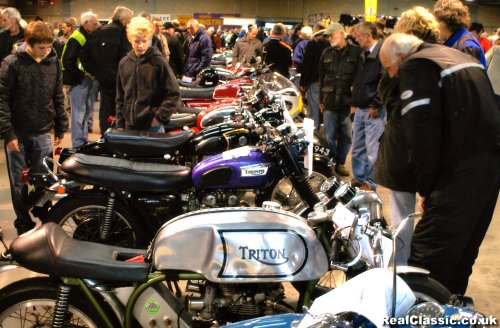 All these bikes and more will be inspected by the concours judges (RC’s editor, Frank Westworth, taking the helm for judging duties) and stand a chance of winning a handsome trophy in eight categories including Best Competition/Special, Best Lightweight, and Best Overseas. The club which produces the most magnificent display will take home the award for Best Club Stand, and one bike in particular will be chosen as the Best RealClassic. The prize-giving is usually at around 3pm; the Show itself opens to the public at 10am.

As well as the old bikes, local Royal Enfield dealer will bring along a range of modern Bullets for your inspection, and the Show will also include various trade stands, autojumblers, a free-to-sell your classic bikemart plus refreshments and a free car park. The main event takes place inside the heated, weather-proof hall, which is where you’ll also find the RC Roadshow, offering a range of RealClassic regalia plus magazines, subscriptions and the odd JaffaNob or ten. Don’t forget to show your RC Club card at the gate if you are a magazine subscribers, because that entitles you to pay the discounted rate.