Triumph motorcycles launch a special model to celebrate the 50th anniversary of the Bonneville, and reveal steadily rising sales…

Triumph have got plenty to celebrate in 2009: booming worldwide sales and the 50th anniversary of the Bonneville. The British-based manufacturer is on the up, with sales set to top 50,000 in 2008. That makes Triumph the world’s fastest growing motorcycle brand, and sales have increased by an average of 17% per annum over the past four years. A sizeable chunk of that success is due top Triumph’s cruiser and retro ranges – so the company intends to mark the 50th anniversary of Britain’s most famous motorcycle with a flourish.

Triumph unveiled the limited edition 50th Anniversary Bonneville at their dealer conference at the end of July. It’s based upon the stock T100 model, and only 650 Bonneville T100 50th Anniversary edition bikes will be produced, echoing the engine capacity of the original 1959 machine. Each will be individually numbered and identified with a brass plate on the handlebar clamp and a certificate of authenticity, signed by John Bloor.

The Anniversary Bonneville will sport a striking orange and blue colour scheme (said to be based upon the Tangerine Dream design, although we don’t remember there being a whole lot of blue in that…), and there will be a bunch of detail changes to the specification to make it considerably more special than the usual T100. The Anniversary model will use the same chassis and fuel-injected 865cc twin engine of the Bonneville range, and will cost £6499 OTR (about £500 more than the standard machine). 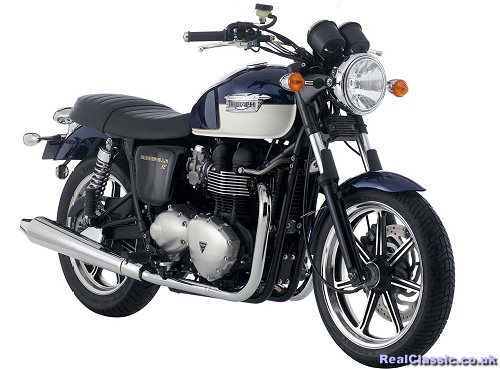 The other members of the Bonnie range get an overhaul, with the Bonneville model being updated and joined by an SE offshoot. Both of these take their styling cues from the 1970s and have been tweaked to make them easier to ride. The front wheel has been changed to a 17-inch alloy item to improve manoeuvrability, the seat height has been lowered by 25mm, and the handlebars are closer to the rider. 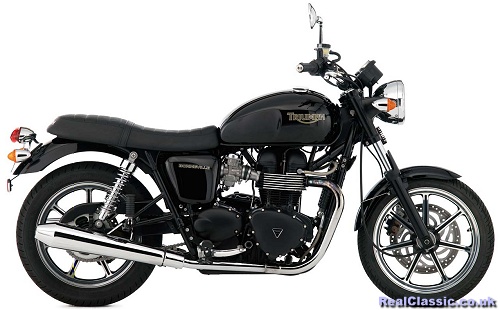 The bike’s styling has been tidied up somewhat with a shorter rear mudguard and mega-style silencer swiped from the Thruxton model. The higher-spec Bonneville SE gets a splash of special equipment including a tacho, chromed tank badges and brushed alloy engine casings. 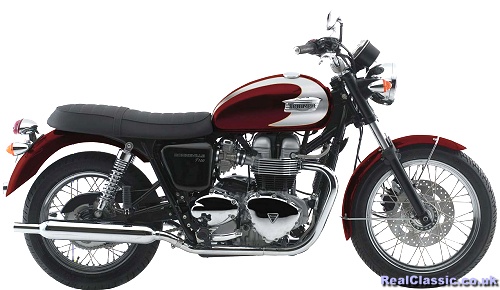 If you prefer a 1960s style bike then the wire-wheeled T100 model would be the one to go for. It remains essentially unchanged with just a few alterations to the footrests, clock surrounds and such. Mind you, fork gaiters now come as standard instead of being option extras – ooh, the thrills… 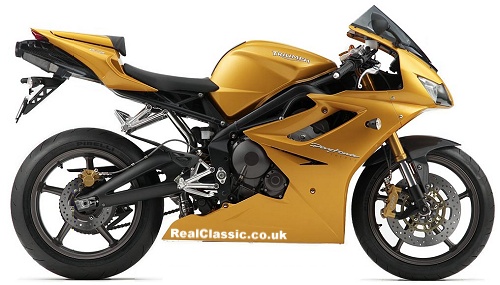 Triumph have opted not to muck around with the Scrambler, and have instead just given it a new paint scheme of matt-khaki and a £5999 OTR price tag. The Triumph range of sport- and streetbikes also gets a comprehensive overhaul for 2009, with many changes to the Daytona 675 and the introduction of the new, high-specification Street Triple R. 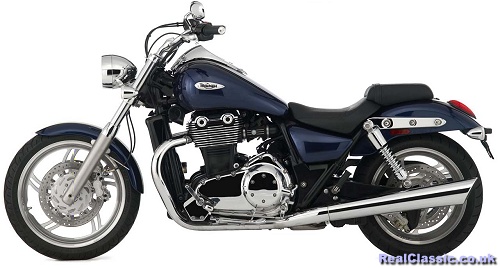 The model which got the most attention at the conference was the all-new Thunderbird, which won’t be available until late in 2009 for the 2010 model year. It’s a six-speed, belt drive, 1600cc parallel twin cruiser with a high spec including optional ABS, and so on. 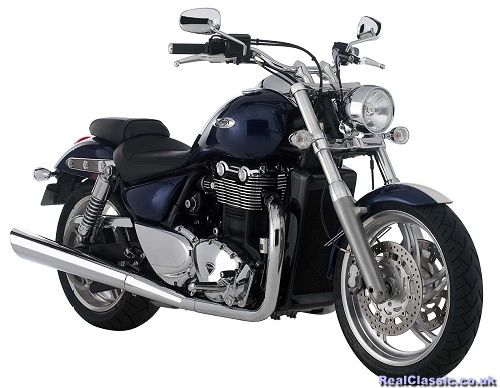 Triumph’s clothing division also announced a range of new products, including ‘Triumph engineered by Alpinestars’ sports riding gear and a new T-shirt depicting Steve McQueen. Most exciting of all (in a sense) was the announcement that Triumph’s first heated product will also hit the marketplace in the coming year, in the form of the electrically-powered EXO2 vest. What next – ladies’ lingerie?

In fact, Triumph seem pretty keen to underline the success of the modern company. If worldwide sales do exceed 50,000 in 2008 then that will beat the record of 46,700 set by the original business back in the 1960s.

‘We often hear talk of the “golden age of British motorcycling” referring to the 1950s and 1960s, but we are proud to be rewriting history and creating a new golden age right now,’ said Tue Mantoni, CEO of Triumph Motorcycles Limited.

‘Triumph is currently operating in 38 countries and our success is a tribute to our philosophy of making unique motorcycles with distinctive Triumph characteristics. As part of our growth plans we are committed to expanding our range significantly over the next few years.’

Great news. Any chance of a Tiger Cub 650 single, chaps?