Classic bike fans have a busy few weeks ahead of them, starting in the Midlands on July 5th; getting festive at Mallory Park the following weekend; have a cracking time in Kent on July 20th and finishing at Founder’s Day…

All Marques Welcome At Uttoxeter

The Uttoxeter Classic Bike Show and Autojumble, although it’s organised by the Vintage Japanese Motorcycle Club, is for all makes of motorcycle no matter which country they come from. After making a solid start in 2007, the second event has attracted many more clubs and entries, with British bikes featuring strongly among them. Some 75 bike clubs have booked in with more than 900 machines entered for the concours. A number of classic clubs are holding their annual rallies at the event further adding to the multi-faceted appeal of what is fast becoming the talking point of the 2008 classic scene.

You can expect to see every kind of classic motorcycle, ranging from barn finds to concours champs, and including 90 air-cooled Yamahas, 40 BSA Gold Stars, 20 Ariel Arrows/Leaders and 30-plus Bantams – and don’t forget the autojumble, trade stands and such. So there should be plenty enough to keep you busy for two full days…

Even in the final couple of weeks before the Festival of 1000 Bikes takes place, the VMCC organisers are still adding attractions to England’s largest racing motorcycle festival. The Tul-aris GP bike will be ridden during the weekend by ex- Grand Prix ace Mick Grant. The Tul-aris is the first and only home-built, US-made Grand Prix bike to set outright lap records and win numerous races, including a national Formula USA Unlimited Grand Prix race. 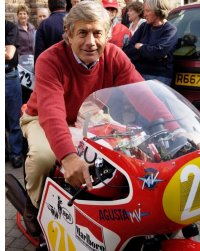 Giacomo Agostini will also be taking to the track at Mallory Park this month, aboard the four-cylinder MV Augusta 500 seen here.

Ago is one of a host of past masters who’ll be re-living old times. ‘To be riding again at Mallory with my old rival and friend John Cooper is a happy feeling for me and this event has many star riders from that time’ says Agostini.

‘It will be good to be riding with them again on the race machines from those great years.’ Look out too for David Hailwood, riding the RC181 Honda 500.

The VMCC have also organised another amazing spectacle, as a tribute to the late Roy Richards. The National Motorcycle Museum will be running four of their famous ex-works rotary Norton racers during the weekend. Ex-Norton works riders Trevor Nation, Ian Simpson, Phil Borley and one other surprise star name will be putting these most iconic of race bikes through their paces. On top of that, up and coming rider Lee Dickinson will be riding the new Norton NRV588 rotary race machine currently under development by rotary guru Brian Crighton.

Martin G’s Morini will be on the RealClassic stand, if he ever gets it finished…

RC readers will be meeting at the RealClassic stand (look for Mike’s Powell Tiger Cub collection and maybe an RC banner if we’re lucky) during the weekend. Wouldn’t be at all surprised if PUB doesn’t show up at some point, too – plus, of course, the Festival of 1000 Bikes also includes many other displays and events; scrambles, pre-65 trials, autojumble, grasstrack, wall of death, live music and evening entertainments.