The riding season must be on the way because suddenly there’s a plethora of new parts for classic bikes, plus free delivery from Frost and a special offer on tank sealant and rust cure…

The oil filter cap for M-series BSAs, which holds the oil filter in place inside the oil tank has been unavailable for years – but it’s now back on the shelves at BSA and Ariel specialist Draganfly Motorcycles. The filter cap costs £13.04 and is part number 66-8358, while the filter itself costs a mere £5.95 (part number 66-8359). You’ll need to add VAT and delivery to those prices – but it still sounds like a snip for the luxury of clean oil…

You may have already heard of or used the Flowliner sealant, an epoxy coating which seals small holes and flaky rust thus extending the useful life of old oil and petrol tanks. Now Flowliner have added a second string to their bow, and are introducing Bio-Rust to RC readers with a special offer. 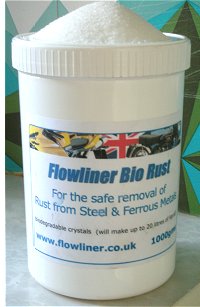 Bio-Rust removes heavy rust deposits from ferrous metals without damaging the items, unlike blasting, acid dips or grinding. Bio-Rust is water soluble and bio-degradable, so does its bit to save the planet too.

Ideal for use in motorcycle tanks, up to 20 litres of solution can be made from the 1000 grams of sugar-like crystals. After degreasing, fill up the tank with solution and then leave for 24 hours during which the product will darken as the rust is neutralised. Drain off the solution, flush out the tank with water, allow to dry and it is ready for sealing with Flowliner Tanksealant.

The solution can be preserved for future use as a dip for soaking smaller components and will carry on working until it completely blackens when finally depleted. Flowliner Bio-Rust normally costs £9.95 plus delivery from C Wylde and Son on

SPECIAL RC READER OFFER: You can buy a kit containing both 750gm Flowliner tank sealant and 1000gm of Bio-Rust (enough for tanks of up to 25 litres) for £32.95 including UK delivery – that’s 10% off the normal price.

The British Bike Bodgers Booklet by John Craggs contains nearly a hundred handy hints for British bike owners and is now available both as a printed book from Lulu (www.lulu.com/content/1023246) at £2.50 or, for those who don’t trust downloads, on CD for just 50p more.

If you’d like a CD version of the booklet then send a cheque to J Craggs at BBBB, 60 Belmont Road, Chandler’s Ford, Eastleigh SO53 3FJ. Happy Bodging!

Those jolly chaps at AMC Classic Spares hold a huge stock of genuine AJS and Matchless components; some secondhand, some new-old-stock and an ever-increasing range of quality new parts for post-war singles and twins. The latest additions to their range are modified rear wheel taper roller bearings, which work as a straight replacement for the original, 014868 items.

The wheel bearings cost £60 per pair including VAT but excluding delivery. You’ll see AMC Classic Spares at most large autojumbles and shows so if you don’t want to pay for delivery you can always collect from their stand in person. Call 01462 811770 to order or if you need any other AJS or Matchless spares (part numbers are handy for ordering but vague descriptions often do the trick!)

Paul Goff, purveyor of bright lights and easy-to-fit electrical gubbins, told us ages ago about the latest version of the V Reg 2 Voltage Regulator for dynamo equipped bikes. But because we are something of a shambles, we somehow managed to file the information under the cat for several weeks… oops. Anyway, reading between the muddy pawprints, Paul says;

‘Because of the ease of connection and reliability these regulators have become an industry standard with over 8000 sold during 11 years of production. These are dual 6V/12V units which means that they can be fitted to replace a failing 6V Voltage control unit then, at a later date, convert from 6V to 12V to give better lights without the need for another regulator. 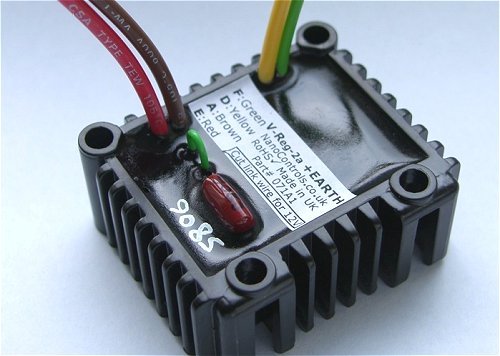 ‘They have the same four connections as the original Lucas regulator and no alterations are needed to the dynamo even for 12V. Unlike cheaper regulators, extra protection is built in to safeguard the dynamo. The latest version is enclosed in a smaller metal casing with fixing screws supplied which makes fitting even easier.’

The Voltage regulator comes with full instructions and wiring diagrams for £41.95 plus £3 delivery to the UK, and is available from www.norbsa02.freeuk.com or 01494 868218.

Welding kit for home workshops has become widely available of late, and you’d be forgiven for thinking ‘hey – I could have a crack at that!’. However, the entire set up isn’t exactly cheap, and it could be one of those things which you buy, use once, and then glower at every time you go into the garage.

Quote reference 804RC before the end of June 2008 when you call 01706 758261 to order, and if you’re a new customer then you can claim free UK delivery (mention RealClassic). Or see www.frost.co.uk/item_Detail.asp?productID=9490 (but you’ll have to pay for delivery if you order online)