The AJS and Matchless Owners’ Club threw open their doors last weekend with a grand open day. Paul Morgan-Knight, who needs all the help he can get with his G80, dropped in…

Many of you are aware of our Steamed Editor’s predilection for the wares of a certain Plumstead motorcycle factory. This motorcycle marque is serviced currently with a top class club and spares scheme.

Until a couple of years ago the club’s spares scheme shared space with a classic bike showroom. When the owner decided to sell up the club decided to buy and sell bikes (under the name of Kettering Classic Motorcycles) as well as running Jampot Spares.

The spares scheme keeps a really good range of stock and is staffed by enthusiastic people who really know their stuff.

May 2008 saw a departure for what is essentially a business run by a club as they decided to have an open day. This tactic can be quite a gamble as the main problem can be the good old British weather. The second problem is whether anyone will turn up.

I had to journey up by car, as I am temporarily embarrassed in the bike department (read that as: I’ve blown it up). I arrived at 10 o’clock armed with my camera and winning smile to see that a small crowd had already gathered. Among them was LJ, from the message board, with his red A10. After hellos and general mickey-taking I was pointed to a door where two young ladies were doing a sterling job of keeping coffee cups full. Suitably refreshed it was time for a quick wander round.

There was a really wide range of bikes for sale from a Garelli step-thru moped to a Zundapp flat twin with a lot of British stuff in between. Hopefully some blotchy pictures should be scattered around for you to look at.

Next stop was the well-appointed workshop. There were various bikes in progress, all being finished to superb standard. When I emerged from looking at the tools and bikes in various states of undress, you couldn’t move at the parts counter. It really was that busy. There was also a good selection of rusting… errr… valuable, previously-cherished spares on a trestle table on one wall. The rummagers were having a field day.

There was marquee in the car park where the refreshments were to served but, thinking of my ever-expanding waistline, I used the opportunity to make my excuses and leave. But not before berating LJ about the minute specks of dirt on his bike, which I knew would cause a frenzy of polishing when he got home.

So if you need spares for your AJS or Matchless then you could do worse than Jampot Spares. While you’re at it, why not join the club? This way you get a discount too. I have first-hand experience of the Jampot Spares service as I’ve used them in the past for my never-ending engine rebuild on my G80 (and I may even finish it one day, possibly).

I really hope that club get some good promotion from this and I feel that more clubs should do this too. It can only do good for the classic bike movement in general, if only to prove we’re ordinary people and not a bunch of old blokes locked in the past! 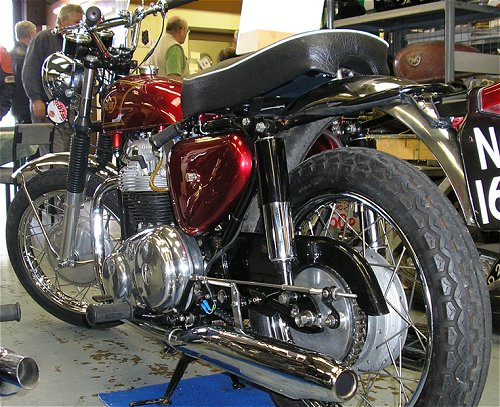