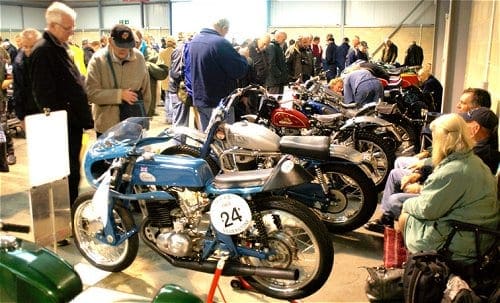 It’s springtime so it’s showtime! There’s just time to finish off your winter project, polish up your P&J and enter your classic into one of the RealClassic-sponsored Spring Shows. Or just come along on your winter hack…

If ever there is an event which is likely to be under assault from the elements, then it’s the Malvern RealClassic Bike Show. We’ve had torrential rain, snow, hail and fog in previous years but the show has always gone on… and we’re usually amazed by the determination and good humour of all those who make the effort to attend. So don’t be dismayed if the forecast is awful; gird up your loins and join us at the Three Counties Showground — at the very least we can promise you a HobNob from the RC biccy tin…

Last November’s show was the busiest ever, so we hope to see plenty of RC readers join the concours competition. Dave Minton will hopefully be leading the way with the judging, and every type of RealClassic stands a very good chance of winning (so you don’t have to ride a shiny Triumph twin. Or a scruffy Triumph twin. Or any sort of Triumph. In fact, you could bring anything other than a Triumph. Unless you want to bring a Triumph, in which case…).

The winning bikes at Malvern last autumn ranged from a 1928 AJS K7, owned by Alan Smith who took home the Bike of the Show award, through a military Norton outfit dating from 1941, oodles of postwar Brits like the class-winning 1952 Enfield two-stroke and an array of excellent BSA A65s (two of which went home with prizes), plus interesting machines from further afield; a 1960 NSU Supermax, a 1972 Suzuki Stinger and a 1980s BMW boxer which took the prize for being ridden to the event.

One other thing: this event will be inside the SEVERN HALL which is a different building to normal. So if you’re used to going to one part of the site you need to follow the signs to the Yellow Gate, and keep your eyes peeled for lots of old bikes. If you end up on your own, then you’re either in the wrong hall (or we’ve printed the wrong date…) (again) (sorry to the man who travelled to the Show on the wrong weekend last year. Really. Very. Sorry).