There’s no doubt that a certain kind of new motorcycle is heavily influenced by the style, sound and substance of classic bikes from years gone by. For 2008, Royal Enfield go back to their off-road roots while the Ace CafÃ© launch a roadgoing racer…

The Ace CafÃ© celebrates its 70th anniversary in 2008 (and you don’t look a day over 50, guys!), and to mark the moment they’re doing something really rather special – building an Ace CafÃ© Racer. There will of course be other events throughout the year, but at the heart of the party is the production of a Limited Edition series of S&S-powered Ace CafÃ© Racers.

The design of the Ace CafÃ© Racer has yet to be finalised, but we’re told it will be ‘based on the “Speed Thrills” and “Burn Up” legacy that is the very core essence of the cafÃ©, its culture and its heritage. The S&S Ace CafÃ© Racer bikes will be the ultimate cafÃ© racers, equipped with a unique S&S 50th Anniversary engine.’

You’ll be able to see the Ace CafÃ© Racer as it develops at www.ace-cafe-london.com. Meanwhile, here’s pic of one which S&S did earlier, for Lance Weil. There’s no denying its brutal good looks. It does seem a shame, however, that the Ace CafÃ© Racer won’t be powered by a British bike engine – perhaps Triumphs just aren’t good enough any more…?

Meanwhile, Royal Enfield brought out another new version of their 500cc Electra-engined Bullet at the International Motorcycle Show this month. The Bullet has been in continuous production since 1949 and the new Woodsman is inspired by the street scramblers of the late 1950’s that the company exported to the USA.

With its distinctive high level exhaust system, trials style bars and solo saddle, the Woodsman looks every inch the classic British single, but is actually powered by the company’s current all-alloy Electra engine, with 5-speed gearbox and electric start. The traditional pushrod design means that owners will experience the characteristic feel of a British single, with plenty of torque, combined with impressive fuel economy – on the RealClassic Electra we normally get about 85mpg, which means we tend to forget to fill it up for 300 miles or so. 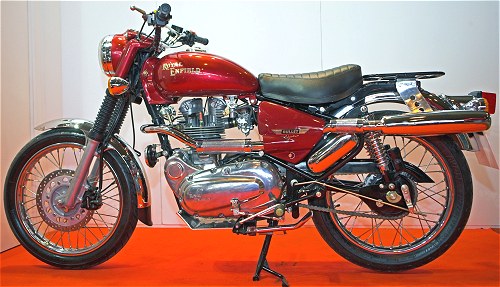 The exhaust system on the Woodsman is not only higher than on standard Bullets, but has moved to left side, necessitating a re-styled side panel, all of which adds to this machine’s distinctive appearance. Its short sports silencer boosts power by 10% compared to the standard model, for brisker acceleration. The Woodsman is equipped with a handy rear rack and alloy bash plate too.

It certainly drew something of a crowd at the NEC, but in part that’s because of its improbably ungainly exhaust bracket. We can’t wait to ride one, to see if it suffers from the usual bane of hi-rise exhaust pipe bikes: ‘what’s that funny smell? Smells a bit like a hog roast. Oh look, my leg’s on fire…’

Royal Enfield has been gearing up for the new Euro 3 emissions regulations and the new unit construction 500cc engine with EFI is also on display at the NEC this November (but we don’t have a photo of it, sadly [Yes we do! RM]. Which is a shame, because we want to see how ugly it is [It’s not that bad actually. RM]. Unless a miracle has actually occurred and someone has designed a new motorcycle engine which looks half as good as it goes). 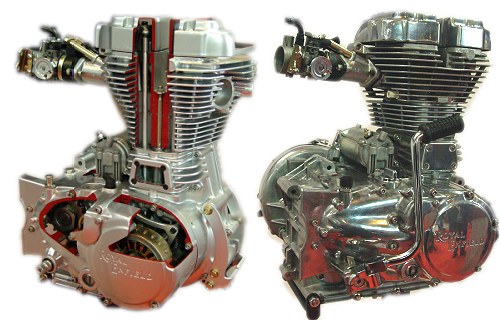 The Classic four-speed Royal Enfield Bullet will be on sale until well into 2008, but by 2009 these iron-engined bikes will no longer be available.

The Royal Enfield Electra Woodsman is due in dealers’ showrooms in spring 2008 and is expected to sell for £3895 OTR (or you could opt for the DL version with chrome guards at £3995).