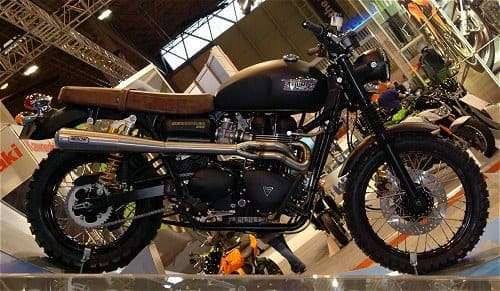 Yes, it’s NEC Show time again. To save you the trouble of traipsing up to Birmingham, Martin Gelder selflessly devoted the best part of a day to photographing new Triumphs, old DMWs and a woman in a rubber nurse’s uniform…

It’s all change for this year’s International Motorcycle and Scooter Show at Birmingham’s NEC; the show has shifted to three different halls within the NEC complex, and the organisers have taken to shuffle the stands slightly. The show is now arranged into three distinct areas, with most of the manufacturers grouped in a single hall, with a second hall mixing some of the bigger accessory manufacturers with the likes of Royal Enfield and Benelli, and a third hall devoted to the “marketplace” stalls selling cut price helmets and waterproofs.

Although interconnected, each hall had its own different atmosphere, ranging from the pleasant airy feel of the big marque stands to the overcrowded hell of the marketplace. Once stand was selling “everything at half the marked price”, but some of their marked prices were ludicrously high (£700 for an Aria helmet that normally costs £400); do really people fall for this?

Triumph were displaying a couple of tricked-up twins, including the matt-black Scrambler, above and a Thruxton with Ohlins suspension and Brembo brakes. Very nice they were too, but they did have the effect of making the standard Bonneville models look a little ordinary. 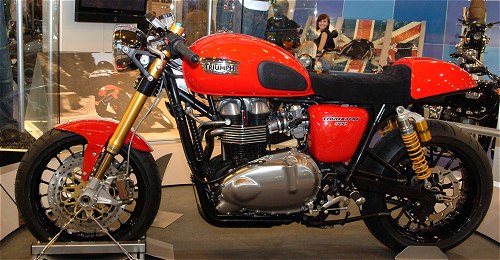 One bike that looked a lot less ordinary that I had expected was the new 675 Street Triple. Very impressive; there was nothing on it that hinted at cost cutting, yet the bike is priced at less than the T100 Bonneville or basic Scrambler; £5,350 for a Street Triple, or £5,900 for a T100? I know where my money would go. 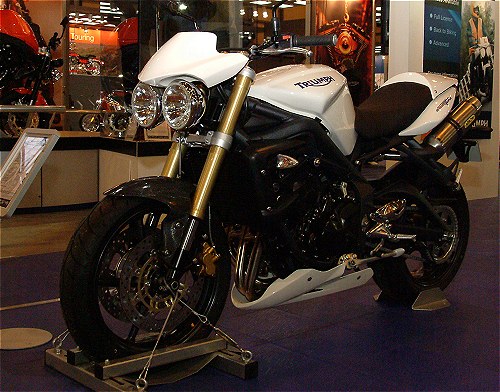 Triumph were also displaying the “Touring” version of the Rocket III; sticking a set of panniers and a screen on the big bruiser is a very logical move. I couldn’t help noticing that a couple of Harley Davidson staffers had wandered over for a snoop at the Electra Glide’s new rival. 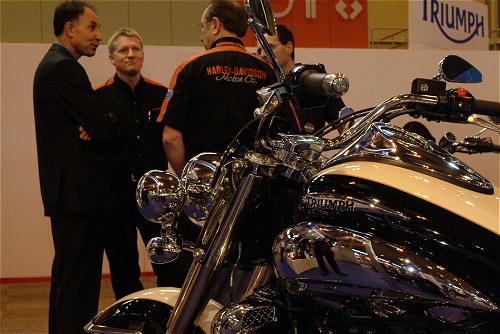 Insurance giant Carole Nash can be relied on to provide the biggest, brightest and most enticing display… 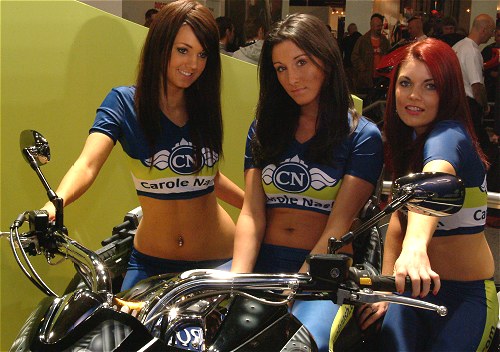 …And they had some bikes to look at as well. 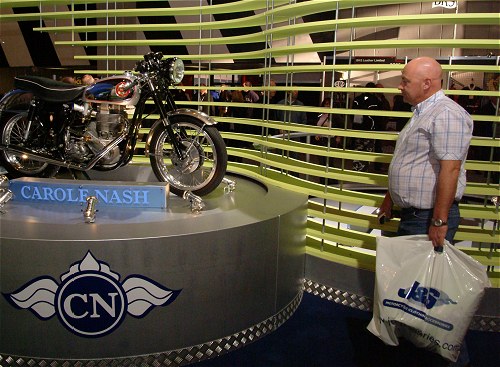 The person responsible for staging the display of custom bikes could learn a lot from Carole Nash’s lighting techniques, with some possibly quite impressive motorcycles hidden in a gloomy and roped off corner, with no additional information on any of the exhibits. 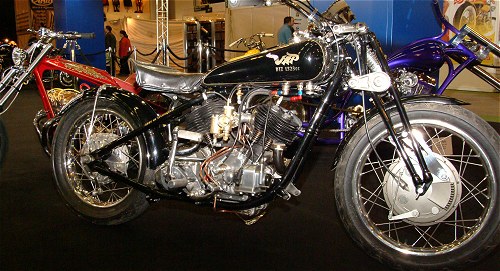 Someone put a lot of work into this JAP special, but I don’t know who. However, I can tell you that this bright blue twin is a 500cc 1966 DMW Typhoon, concocted by sticking two Starmaker 250s together. 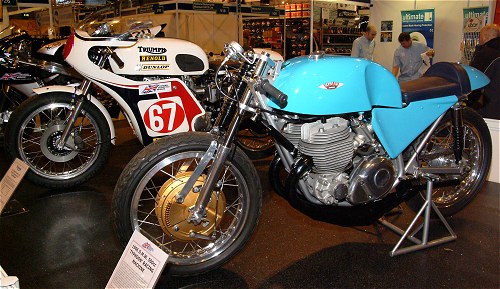 Modern bike fans might be as interested as I was to have a good look at the new Buell 1125Rwatercooled v-twin; I can confirm that it’s as odd looking in the flesh as it is in photographs, and certainly nowhere near as special looking as the cheaper Street Triple. Have I mentioned the Street Triple yet? Oh, ok… 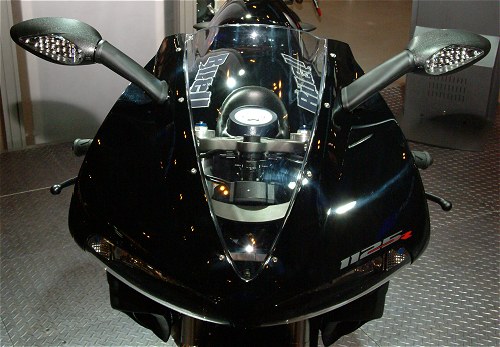 At shows like this I always find myself strangely drawn to the kind of factory customs and cruisers that I’d normally walk past without a second glance. 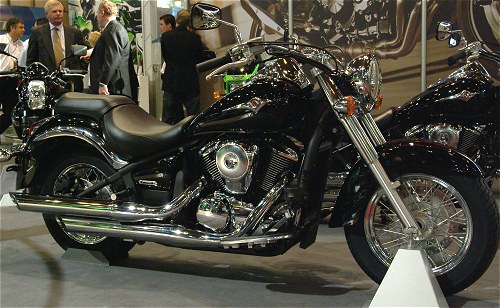 2007 Cruiser from Kawasaki. Or maybe Yamaha. Or Suzuki. Or Honda.

It could be the effects of the artificial lighting, or it could be something they put in the press room coffee. Or perhaps it was all just getting too much for me.

The show will also feature various motocross and wall of death displays, the chance to test some of the latest models or have a crack at riding a bike for the first time and – depending when you go – the opportunity to hear your racing heroes answer inane questions. For some, though, the effect of all those bikes and bargains can be be overwhelming… 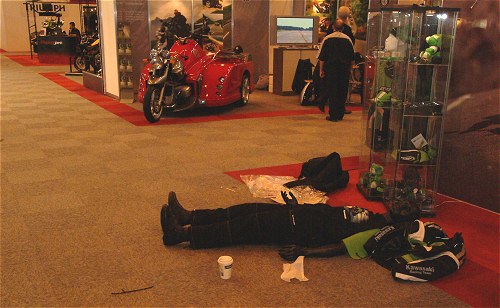