The Royal Enfield Open Weekend hoves into view on the horizon, and the new Electra Clubman promises to be the star of the show…

Last year, during one of the wettest weekends of the summer, Royal Enfield threw open the doors to their UK HQ to the public. Before the monsoon swept stallholders and small children aside, some 1600 people had the chance to view the entire range of Royal Enfield machines and more than 200 folks took a Bullet for a test ride.

The Shipston Sea Scouts provided refreshments (including handsome helpings of curry!); Enfield author Gordon May spoke volumes; Rowena was on hand to confirm that modern Electras really can clock up the miles (nearly 3000 in 11 days on her Round Britain Ride); and a concours winner went home each day with a special RC prize. 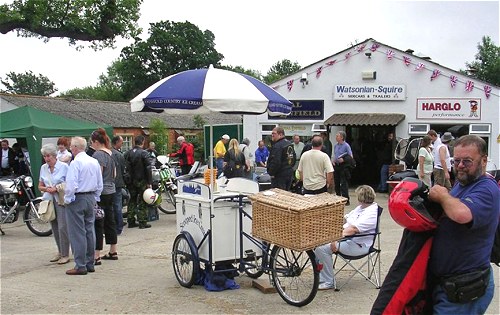 It was so much fun that Royal Enfield are doing it all again this year on July 28th and 29th. If you’ve ever wondered whether you might like to try a modern Enfield, then this is your chance.

You’ll be given an exclusive inside view of what goes on at Royal Enfield and Watsonian Squire, plus kid’s entertainment, technical talks, competitions and all that jazz. All the current RE models will be on display – including the new Clubman seen here, with its polished aluminium tank, ace bars and upswept Goldie-style silencer (but you have to bring your own Best Gurl; the one in the photo ain’t included!). 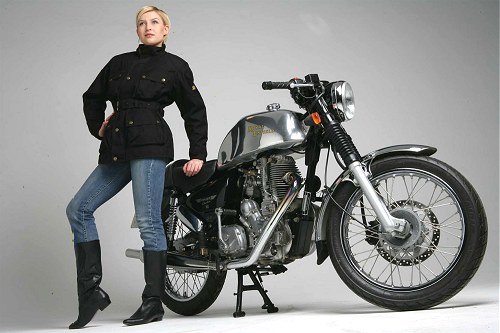 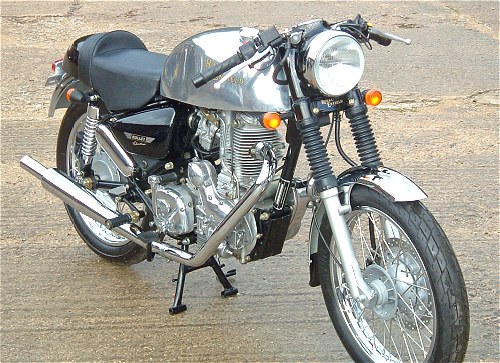 So if you fancy test riding a Clubman – or any of the RE range – then you should contact Watsonian asap to book your test ride during the Open Weekend. Don’t forget to bring along your driving licence…

It’s going to be an extra special day for Rowena, because she’ll be reunited with the Electra which took her all around the country in 2005. So come along and join the RC Crew from 10am until 5pm – and remember that all bikes and riders are welcome, whether you own an Enfield or not!