The Don Leeson collection of Suzukis and spares goes under the hammer in May, while two RC feature bikes will be sold at Stafford. And how much would you pay for a burnt-out classic bike?

Classics Roll in for Kempton Sale

After a very successful first sale of the season at Cheltenham (see below), the burgeoning H&H motorcycle department will hold its second auction at Kempton Park Racecourse on May 12th 2007 – alongside the huge EGP Southern Classic Bike Show and bikejumble. Ardent bikers will be aware that this popular 21 year old event is arguably the biggest of all the general classic bike shows in the South, with some 400 stalls and thousands of visitors – an ideal venue for a motorcycle, motobilia and bicycle sale.

When we were at Kempton last month, the H&H team were eyeing up the pavilion and working out just how they were going to display the bikes and the tonnes of spares which will be in the auction in May. A major component of the sale will be the Don Leeson collection – of great interest to all fans of classic Suzukis.

Don was a founder member of the VJMC and an avid collector of Suzuki motorcycles. Sadly, he was killed on the Isle of Man two years ago, so his personal collection of some 40 machines is coming to market. Many of the motorcycles on offer are Suzukis from circa 1960 to early 1970. Most are road models, but there are one or two racing machines including a TR250 and a factory RV61 racing chassis equipped with a T20 engine.

There is still time to enter a motorcycle for the Kempton Park sale – see www.classic-auctions.com if you’d like to sell your bike at this auction. 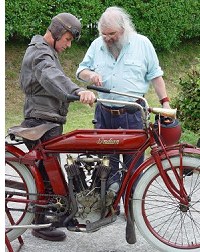 RealClassics Under The Hammer At Stafford

Two bikes which have been featured in RealClassic magazine will be up for sale in the Bonham’s auction at the Stafford Classic Bike Show on 29th April 2007. Last year we rode and wrote about a very original Norton Dominator 88 De-Luxe and a 1913 Indian V-Twin.

Both were owned by Steve Stephens who has since passed away, and the bikes are now looking for new owners. The Indian is estimated to be worth between £20,000 and £24,000, while the Dommi is expected to sell for around £3000.

As usual, there are plenty of other machines on offer at the Bonham’s auction from a 1902 Peugeot Perfecta (estimate £4800 to 5500) to an MV Agusta Magni 861cc racer (estimate £25,000 to 30,000) which has been ridden regularly in recent years by ex-World Champion Phil Read. Phil has also consigned his own 2001 MV F4 to the sale, a machine which was given to Phil by MV President, Claudio Castiglioni.

Vincents have been performing strongly in the sale-rooms in recent years and the c1949 Black Lightning (estimate £45,000 to 55,000) is sure to set pulses racing. Built up from parts in Australia a few years ago and freshly restored in the UK, it incorporates a genuine Black Lightning engine delivered new to Eric Winterbottom in 1949 for use in a Cooper racing car. Two Japanese machines of exceptional interest have been consigned also: a 1969 Yamaha 350cc TR2 racer (estimate £12,000 to 15,000) that has never been used and remains as delivered to its German owner; and a highly original, ‘modern classic’ 1985 Suzuki GSX-R750 (estimate £3000 to 3500) used only briefly when new and with a mere 2600 miles recorded.

To order a full catalogue for this sale you should call 08700 273 616 or email motorcycles@bonhams.com 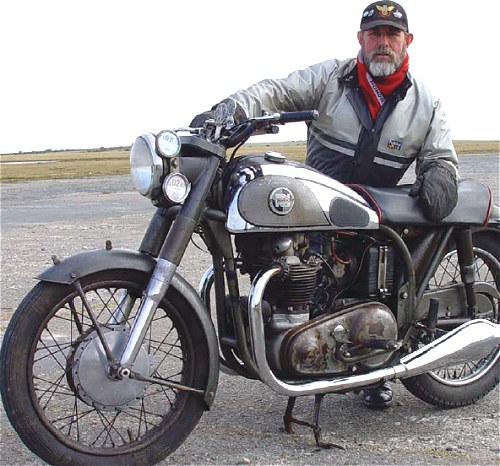 There must have been some March madness in the air at Ledbury for the HJ Pugh sale which included the Roy Thompson collection of fire damaged motorcycles. The Pugh sales usually feature a good selection of workaday motorcycles at reasonable prices, but this time the smell of smoke must have affected the bidders’ sense.

For instance, an unremarkable, fire-damaged BSA A10 with no papers sold for £580. We have experience of rebuilding a classic bike which has been burned and it demands a near-total restoration. You may think it doesn’t look so bad but… the heat severely affects rubber, alloy, plastic and even pukka castings. And you don’t know how bad it really is until you take the thing to pieces.

There’s going to be a big batch of ‘just restored’ bikes coming onto the market in the next couple of years – and they’ll be asking top dollar for them!

Lots of Lots At Cheffins

The entries for the Cheffins Spring vintage sale closed recently to give a good selection of old motorcycles and automobilia April 21st 2007 at the saleground, Sutton near Ely in Cambridgeshire.

Catalogues are available by post at £10 each from 01223 213777 or email jeremy.curzon@cheffins.co.uk for more information.