Overall sales of new bikes in the UK remain steady, but Triumph and Royal Enfield both enjoyed a mini-sales boom in 2006…

In 2006 the overall UK market for new motorcycle sales was roughly the same as the year before – it grew a fraction by 1% over 2005. Yet UK sales of the Royal Enfield Bullet rose by 6% in 2006, and Triumph’s last financial year (which finishes half-way through the calendar year) also showed strong growth. 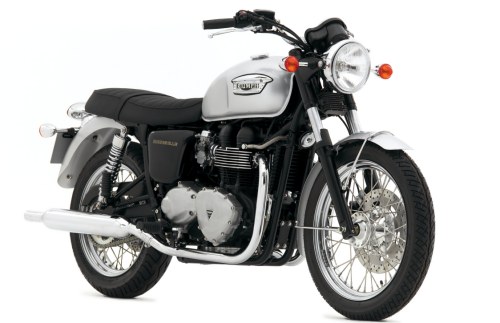 Meanwhile, over in India, the Royal Enfield factory produced 33,000 machines in 2006. Plans are in place to boost production by 10% for 2007, which would bring Enfield close to matching Triumph’s production total of 37,400 machines.

‘The factory struggled to keep up with demand from Europe last year and that’s held back our plans for growth,’ explains Ben Matthews, UK Sales Director for Royal Enfield. ‘We’ve substantially increased our forward order from the factory for the coming year and we’re gearing up for our best year to date.’ The UK is the biggest overseas market for Royal Enfield, and sales here were up by 6% in 2006.

This figure represents all the variations on the Bullet theme, from the original 350 machine through the 500cc 4-speeders to the current model 5-speed lean-burn Electra models. Royal Enfield attribute the Bullet’s growing sales to its ‘classic looks and incredible fuel economy’ and explain that ‘it is possible to travel up to 300 miles on a tank of unleaded petrol costing £12 to fill.’ 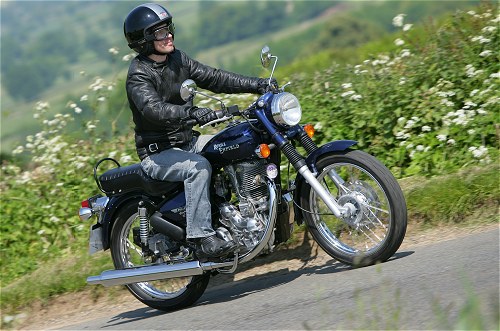 Prices for the Royal Enfield Bullet start at £1999 for the Classic 350cc model, while the basic price for a lean-burn Electra is £3532 on the road. So it’s possible to buy a Royal Enfield, ready for the road, at under half the price of a Triumph Bonneville. However, if you outfit an Electra with the recommended Highway Kit (which raises the Electra’s power output by around 25%), and a few accessories to suit your style, then you’ll find the price tag rising to over £4000. That’s still a cool grand cheaper than the entry-level Bonneville, although the Triumph does offer twice as many cylinders and double the grunt for your extra money…

If you choose an Enfield then there are plenty of accessories to deliberate over – the official catalogue now runs to 28 pages with photographs and descriptions of over 120 items, from a set of replacement handlebar grips to a complete kit to transform a standard Bullet to a cafÃ© racer. The UK importer has developed a range of performance and cosmetic upgrades – solo saddles, alloy tanks, mini indicators, luggage systems, fly-screens and so on. There’s also a healthy independent support network for Enfield owners, led by specialist Hitchcocks’ Motorcycles whose own catalogue extends to over 140 pages packed with spare parts.

So will 2007 be the year when Royal Enfield build more motorcycles than Triumph? It’s not too likely, because Triumph aren’t standing still and have invested their profits on more production capacity – but watch this space in a year’s time…