The VMCC is a vast organisation, a classic bike club which covers the whole of the UK and beyond. Roger Fogg explains what it’s like to be a member of the Cornwall Section of the club…

The VMCC has around 15,000 members, and caters for those of us who like motorcycles and three wheelers that are more than 25 years old. It’s been going more than sixty years now, which means that there are a lot of members around who have interesting machines in their collections, stories to tell, photographs to show and adventures to talk about. The Club is divided into sections, covering areas of territory arbitrarily assigned, some covering Counties, others may just be geographical areas or even cities. Each section seems to be unique, albeit being part of the bigger club; they all run slightly differently reflecting the needs and personalities that are an essential part of the make-up of any club.

Cornwall Section covers a large area. From the Tamar to Land’s End it’s around 120 miles and, with large lumps of sparsely populated areas like Bodmin Moor in the middle, it’s not always easy to find a suitable venue for Club Nights. The section recently celebrated its fortieth anniversary, having been started in 1965 by Jack Bacon, and it continues with some of its original members although numbers have risen to over the 200 mark.

Monthly meetings are held in Truro, which gives Club Members one of the most visually stunning regular meeting places of any section. We enjoy distant views of the Cathedral across the cricket pitches and playing fields of Malpas, where once Tristan carried Isolde across the river to escape in a boat from her father King Mark of Cornwall.

A sub-section meets in the south-east part of the county near Liskeard, and this also has a healthy and growing population. This is not so far from Plymouth, which at the time of writing has little or no VMCC presence, which in a City of that size is a little surprising! 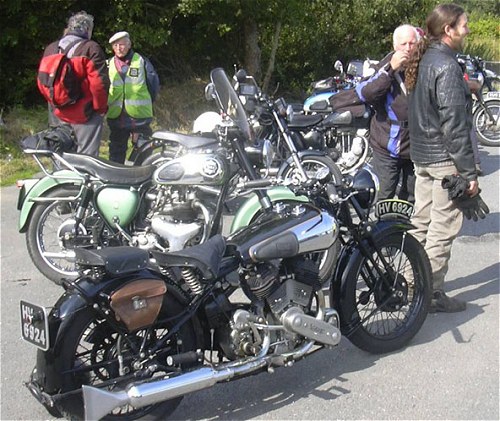 There have been some really interesting guest speakers, some excellent pub lunches, plus dinner dances and award evenings and of course there are regular runs. As a group it’s hard to generalise about members’ preferences, but generally we are a little unsure about quizzes, mostly prefer to ride post-war bikes, like getting awards (we nicked the idea of Crank Of The Month from another section, John Rowe got it this time for riding his Magic Scooter), like good conversation, are not afraid of riding in bad weather, know who the good engineers are, plus mag menders, chromers, wheel builders, electric specialists (and good magazine editors!).

Generally we go to only a few rallies, preferring to ride rather than just stand around. Mostly we have knowledge of off-road events, there being very little history of proper road racing in the area. We do have a member in the Isles of Scilly, who took part in the Relay Rally as part of our section this year. 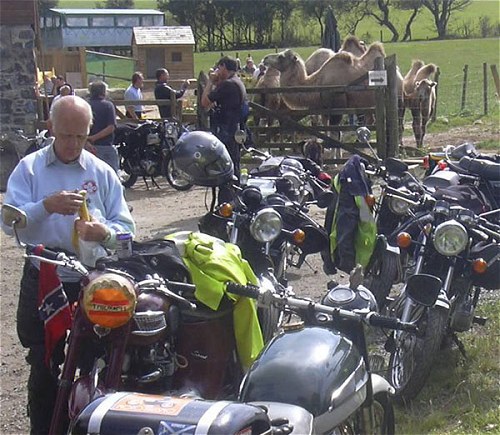 For most runs a meeting place is decided upon, usually a year in advance in order that all necessary paperwork is completed. At the appointed time the run leader makes sure everyone has signed on and all is legal and bikes are eligible. We normally ask for a £2 run fee that goes toward section funds and covers any expenses. The leader identifies himself, as does the backmarker, and the destination is announced to all, as well as relevant instructions about traffic matters and the like.

Cornwall Section usually operates the ‘drop off’ system on the runs. Sometimes a route sheet is given out, but most riders have problems reading them, so a routine of dropping off the rider immediately behind the leader at a turning or crossroads in order to show the way swings into action. The theory is that there is a continuous rolling group of people who don’t need to look at directions on a map. A backmarker will release the member on the turning after everyone has passed and that person then will gradually work his way back to the head of the group possibly even having to do his turn on a crossing again. If there is a breakdown and a group of people want to assist, then the backmarker will overtake and keep the show on the road. Simple! Well, it is if everyone sticks to the rules… 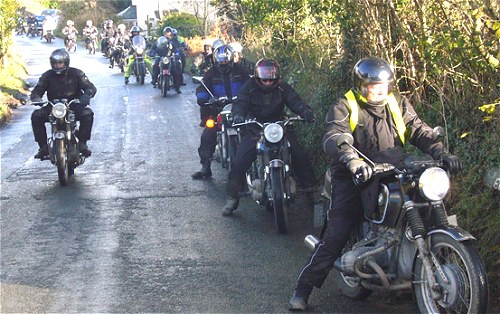 The runs are designed to take in main roads, but also lots of back roads and lanes. It’s no good trying to keep the bike clean in the winter. After a couple of miles of mud, leaf mould, puddles and general detritus most machines end up looking like agricultural implements. In the summer, of course, you can go for miles and only encounter a few horse or cow droppings, which most people try to avoid if they can!

The Cornish countryside is glorious at any time of year. In early summer the hedges are a riot of wild flowers — grasses bowing into the lane to make the narrow tracks even smaller. The woods are full of birdsong and the sun slants through the leaves. In autumn the leaves are on the ground and the early morning mists hang around in the valleys, making riding a see-saw of cold and, well, a bit less cold as you get up on the higher ground above the clouds.

The sea plays a part in all our lives in Cornwall. Its influence is felt in the weather patterns, and also in the salt content which makes it necessary for those who live and ride near the sea to keep the bikes regularly washed off with fresh clean water, otherwise the rust will soon start appearing.

Our ‘flat tank experience’ is when a few of us let those who hadn’t done it before, have a go on an airfield! Ride a vintage bike that is… We have done our bit by raising money for charity, the Samaritans and Macmillan Nurses being some of the beneficiaries. Occasionally we have acted as funeral cortege for members who have died, and accompany the hearse to the local crematorium. On a lighter note, we have sailed on a very high tide down the Fal to Carrick Roads on a specially chartered ship.

Food plays an important part in our wanderings. Beach cafes are popular, good pubs are eagerly sought out and sampled ,and well known ice cream stops on our routes are a necessity, Roskillys Ice Cream Factory is one of the main resting points on our South Cornwall Run. A pasty is not just a pasty, and the best butchers and bakers are located in often quite remote places. Heaven forgive anyone who buys a pasty at the same place they get their petrol! (By the way, pasty dough is wonderful for getting oil out from under your finger nails, and the pasty with meat at one end and apple pie at the other is a total myth. They just can’t be cooked together, unless you can prove differently). Incidentally, does anyone else ever eat saffron or yeast buns, other than the Cornish? 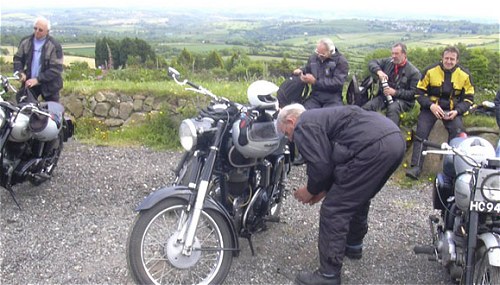 Most bikes are reliable, but of course they do break down. Usually there is an army of experts on hand to assist with advice, tools, bits of string, nuts and a good shove. If your bush has fallen out of one of your rear suspension units, here’s a plastic tie or two to help. Spare plug? No problem. Tow rope? Yes. Borrow your glasses to do the points? Of course! Mervyn Pearce says that he doesn’t mind operating a breakdown van, but riders will have to provide their own plank.

The Cornwall Section is much like any other group of riders. There are the characters and eccentrics, the good engineers and the jokers, the quiet and knowledgeable. It wouldn’t function without the hard work of the committee members of course. The two secretaries of the Section, Stan Weston and Peter Shelton, do a huge amount of work, and then the joint chairmen Adam Mason and John Lloyd Hughes keep the workings well oiled. Did I mention the Land’s End Run, and the National Trust Rally?

At our Christmas run this year we were expecting a dozen or so bikes. In the event about 45 turned up, only slightly dismaying Peter Old whose house we were going to visit with a view to taking a leisurely bacon sandwich and cup of tea or two. But of course he and his two lady helpers coped with no fuss. Machines that turned up ranged from a 1922 belt-drive Douglas to some of the older, Japanese four-cylinder bikes, a fairly typical cross section of the machines that normally turn out for the runs. There were two sidecars, and lots of pillion passengers, plus two ancient wise cracking Father Christmases. Not a bad morning at all really!

The Cornwall Section of the VMCC meet at Truro Cricket Club, last Friday of the month, or St Pinnock Band Room, East Taphouse second Thursday of the month

If you would like to promote your club, send details of who you are and what you do to TP@RealClassic.net A few photos of club members and their bikes would come in handy, too!