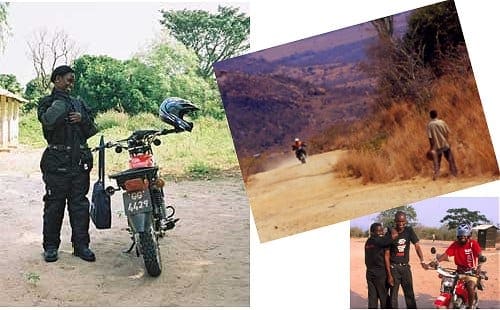 Motorcyclists’ charity Riders for Health will feature in the BBC Lifeline programme this Sunday. MotoGP presenter Suzi Perry is presenting an appeal on behalf the organisation which helps motorcycles save lives…

Riders for Health has teamed up with the BBC in a bid to help people in remote African communities receive the gift of a healthier future this Christmas. BBC Grandstand presenter Suzi Perry is to host the appeal for support in the BBC’s Lifeline programme on Sunday 17th December, which will feature Riders’ work in the Gambia, West Africa.

Riders for Health is a charity (self-funded and with no government support) which provides health workers in Africa with basic motorcycles and maintenance skills to allow them to travel to remote locations. The charity was set up by grand prix motorcycle racers in 1986 and is supported by the industry and motorcyclists around the world.

In 2006 Riders’ African-led teams helped to reach nearly 11 million people with regular healthcare, and it is now appealing for funding to expand its work even further to reach another 10 million people by 2015.

One beneficiary of Riders’ work is 26 year-old Manyo Gibba, whose story is told in the programme. Based in the village of Medina Serign Mass, about half a day’s journey from the Gambian capital, Banjul, she cares for nearly 20,000 people in 14 villages. For the last four years, her tough job has been made easier by a simple motorcycle, managed by Riders for Health.

“Before I had the motorcycle,” explains Manyo, “I had to walk or hire a donkey cart to visit my villages. Many of the communities would not see me for a month or more. But now I can visit them at any time of the day or night, and they see me at least once a week.”

TV presenter Suzi Perry returned to her biking roots to make the appeal on behalf of the charity. “You could argue it’s the less glamorous side of life-saving,” says Suzi. “Riders don’t rush in with vast amounts of food or perform emergency operations, but it’s absolutely certain that without the role they play hundreds – maybe thousands – of people wouldn’t be alive today. So if you’re a biker like me, or you just admire the fantastic job Riders are doing, please support this appeal and make a donation today.”

To make a donation, call 0800 093 93 94 (from 17th December), or send a cheque payable to ‘Riders for Health’ to Freepost, RIDERS FOR HEALTH. Or you can donate online by clicking here.